Public Transport in Antalya: What Are Your Options? 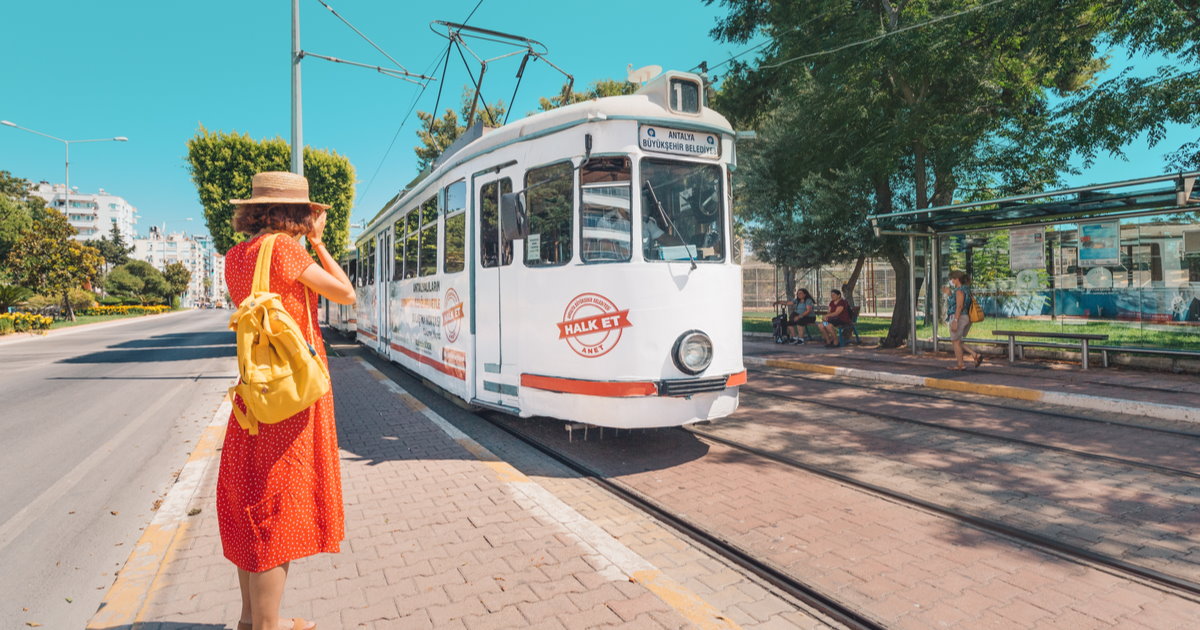 One thing you will notice while visiting Antalya, it's not a small city! In fact, it's actually quite large. Antalya has more than 2.5 million residents and a very well-developed public transportation network to allow everyone to get around easily.

There is no metro in Antalya, but buses, streetcars, the small collective buses called Dolmuş, and taxis are available for getting around the city. If you have a car, you can easily avoid driving in the city center, as public transportation runs at short intervals and is more economical.

In this article, you will find information about all the public transportation options in Antalya. The first is the old tramway, also called Heritage Tram or nostalgic tramway. It has a total of 11 stops and runs in the city center from the Ancient Museum to the Zerdalilik district. It's route is along the waterfront and stops at the Old Port, Hadiran's Gate, and the famous Clock Tower, among other places. These nostalgic tramway cars came from Nuremberg, they were a gift from Antalya's twin city, Nuremberg.

The second and newer tramway line is called AntRay. In 2016, it was extended beyond the Aksu district to the garden exhibition site. Ultra-modern cars run on a 30-kilometer route with 49 stops.

This extension means that you can now reach the Antalya Airport by tram. The trains run every 10 to 20 minutes and usually operate from 6 am to midnight.

It is also possible to go to the ancient city of Perge, 16 kilometers northeast of Antalya, by tramway. By bus, you can reach any part of the city and almost any place in Antalya. Buses are a very popular means of transportation in Turkey and in Antalya, too. That's why they are unfortunately sometimes quite crowded.

The buses are numbered and the letters on the route numbers indicate between which places or districts a bus runs. But don't worry, even locals don't know exactly the complicated system behind the numbers.

To get to the airport, take bus number 600. It takes an hour to get to the Antalya Airport.

On the newer buses, the ride can be paid for by QR code from your cell phone, but not all vehicles are equipped yet. The Dolmuş is a small collective bus or collective cab as they are sometimes called. They are one of the most popular means of transportation in Antalya.

They operate between two points on a well-defined route, at a set time interval. Passengers can get on and off wherever they want on this route. All you have to do is signal the dolmuş from the roadside and it will stop to pick you up.

If you want to get off, just tell the driver and they will stop at the next opportunity.

Here, you can find more information about the dolmuş in Antalya . In Antalya, there are about 3,500 taxis on the road, which are easily recognized by their bright yellow color. A hand signal from the road is enough and the taxi will stop if it's free. You tell by the lights on the roof of the vehicle if it's free.

Check out our detailed guide about how to use a taxi in Antalya. In order to use the public buses and streetcars, you need the AntalyaKart. The credit card sized card is made of plastic and will allow you to pay for your local transport. It is not nominative and can be refilled at vending machines.

How much is the cost of traveling in Antalya with public transport? A trip by bus or tramway with the AntalyaKart costs 3.65 Turkish liras. You are allowed to change vehicles once within one hour.

Check out more detailed information about the AntalyaKart here.

Here, we've covered all the ways you can move from one spot to another one in Antalya. Let us know what type of public transportation you prefer in Antalya or elsewhere in the comments below. Also, let us know which ones you don't like to use, too.

Read about taxis in Antalya and our complete guide to renting a car in Antalya.

If you are planing your trip to Antalya, you might be interested in our hotel selection in Antalya Guide and our Antalya Ticket Shop, both available to make your trip easier!

How To Fly To Antalya

How To Fly To Antalya

Rent a Car in Antalya and Traffic Rules to Know

Rent a Car in Antalya and Traffic Rules to Know

Using the AntalyaKart in Antalya: What You Need to Know

Using the AntalyaKart in Antalya: What You Need to Know