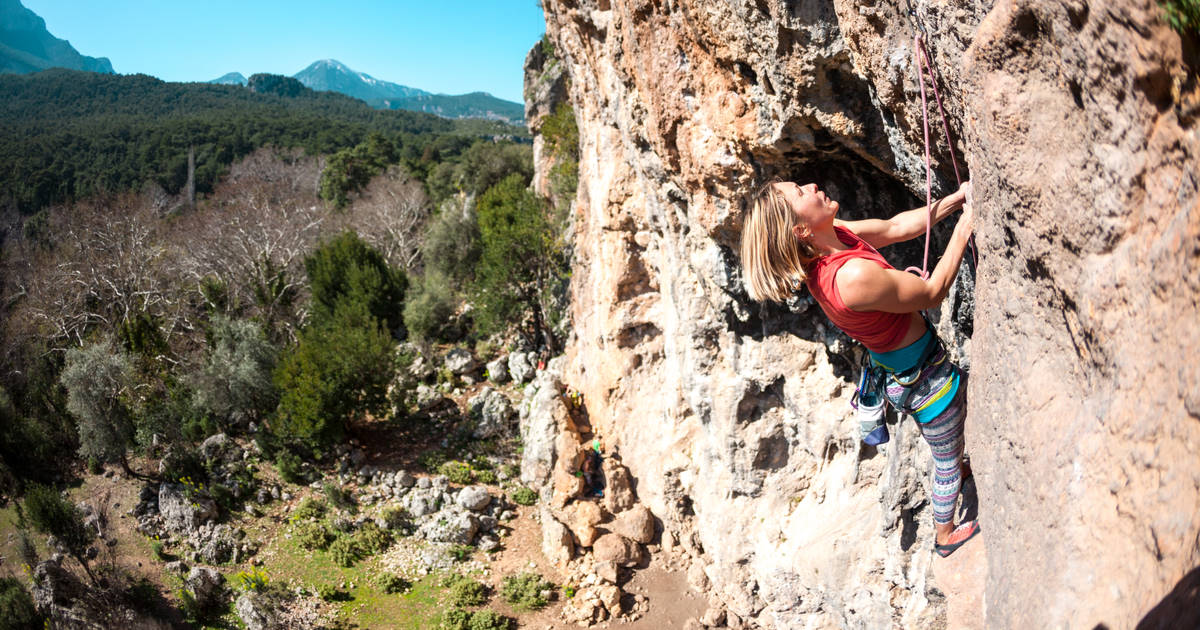 Antalya is famous for beaches, resort hotels, and ancient ruins.

Did you know that the region is also one of the locals' favorite areas for sport activities?

With it's unique natural surroundings, Antalya is a very nice place for climbing along the coast and in the Taurus Mountains.

On this page, you will find everything about the available climbing options in Antalya, things you should know, and frequently asked questions.

Let's start with the best places for climbing. 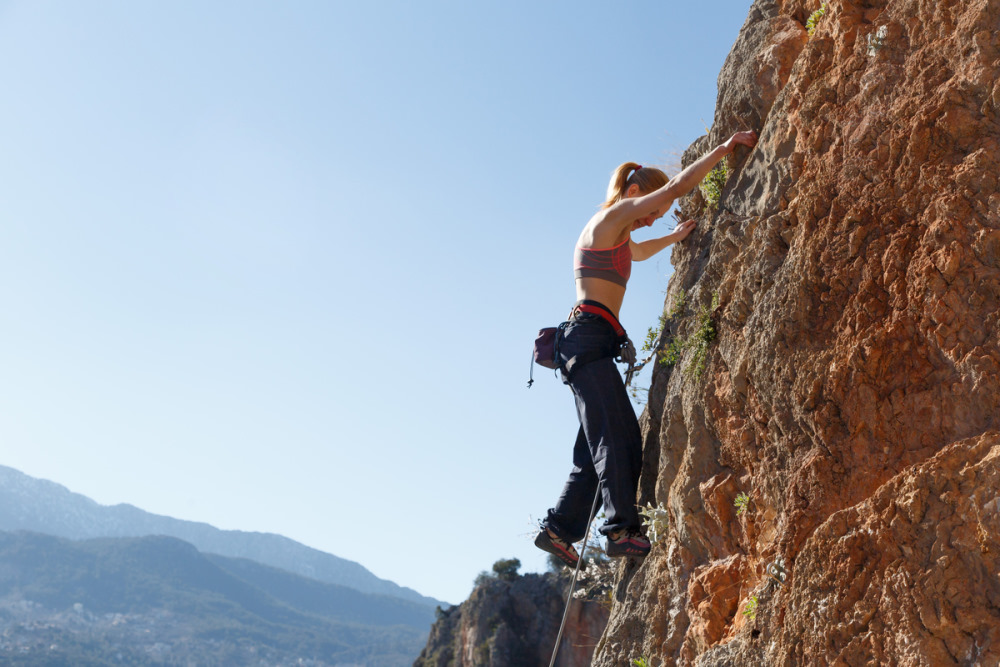 One of the largest climbing areas in Turkey is located 15 kilometers from Antalya. Geyikbayırı has over 1000 routes, all professionally bolted. The rural mountain area is surrounded by olive, pomegranate, and orange groves and it offers climbs for all levels.

The limestone is partly sintered and provides varied climbing opportunities. The valley is divided into two main sections, a long south wall and a long north-west wall. In addition, there are smaller sections with different orientations.

The rocks facing south get very hot in the summer because they are exposed to direct sunlight. The Trebenna section faces north and is preferable in the hot months because you can climb there in the shade. The routes here are more difficult because they are steep and overhanging. Climbers from grade 7  will prefer this area.

Small wooden bungalows can be rented directly in the climbing area, and various camps are available, including Josito Camp, Peak Guesthouse, Climbers Garden, and Kezbans Camping, to name a few. 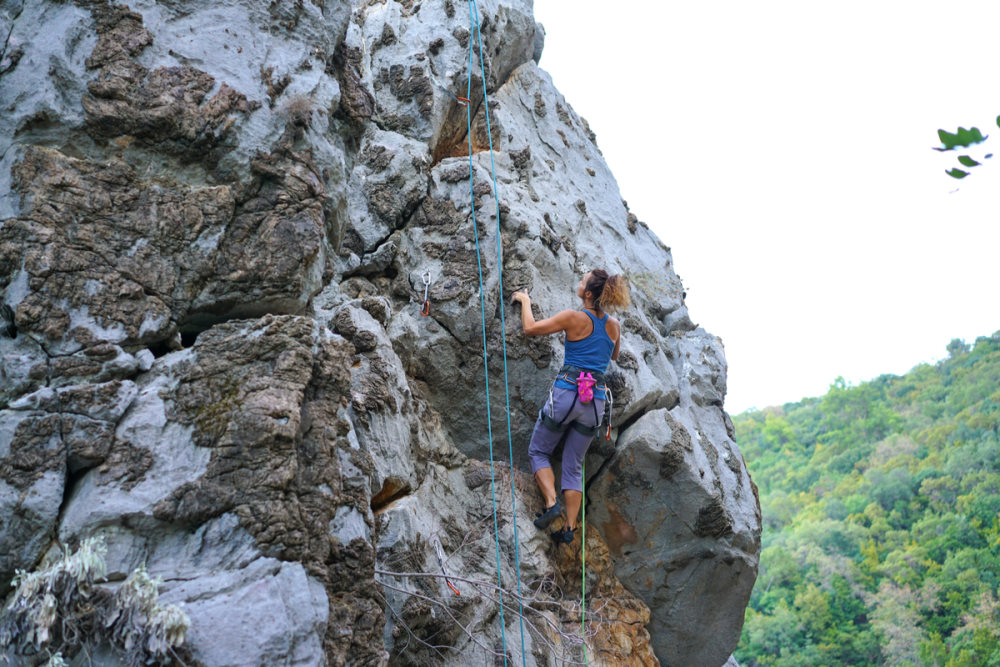 Near Olympos, in Çıralı, is another climbing area. Here, there are over 250 routes on limestone of all levels of difficulty.

In this climbing area you will find routes on slabs with small pockets that require technical and balancing moves, to routes on tufas and huge roofs. Some of the crags are only a few hundred meters from the beach. There are also several walls in this area that are suitable for deep-water soloing (DWS), as the sea is deep enough to attempt routes from 8 to 35 meters long. These walls can be approached by boat. 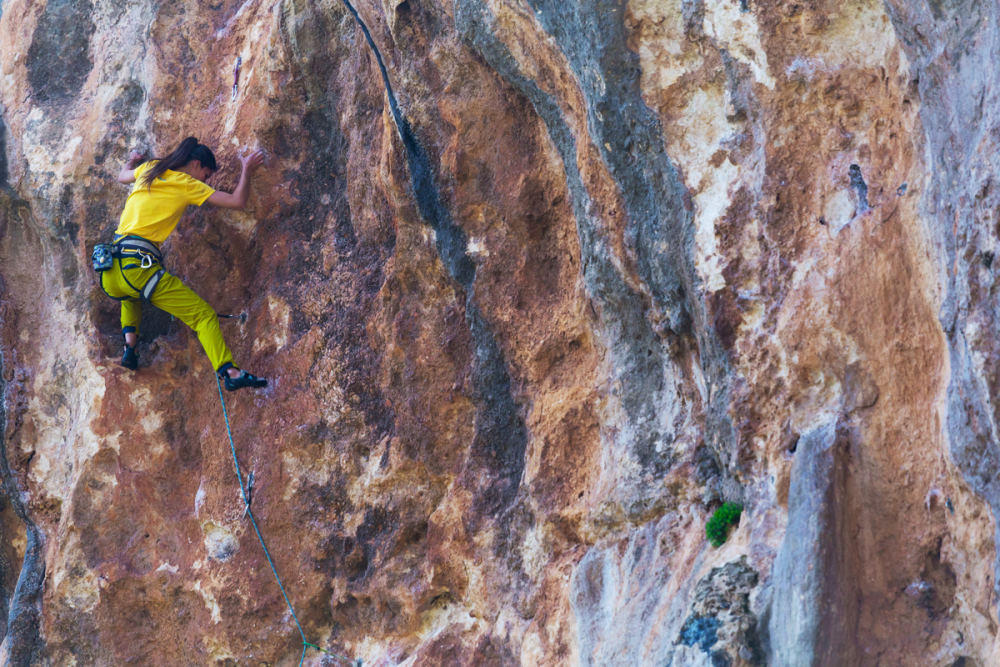 Çitdibi is one of the youngest climbing areas in Turkey. The rock, located at an altitude of about 1,000 meters above sea level, is 40 kilometers southeast of Antalya. Directly below the climbing rock and at the southern foot of the 2,649-meter-high Tunç Mountain is the Masal Refuge, from where the climbing tours start. There are currently 56 developed routes of varying difficulty here. The mountain faces east and only gets in the sun in the morning.

The area is divided into different sections. On the right section, there is tuff on 140-meter-high rock with blue and orange stripes. The left section, on the other hand, is not so colorful. Here, you climb on ridges and rocks. In the spring, this side is often dirty due to the dripping water.

The section called Mağara Cave offers steep, sporty climbing routes with difficulty levels between 7a+ and 8b+. In the red rock section, the routes are vertical and often slightly overhanging, leading over a red and orange rock that looks like red marble.

Even in the winter and spring it's always dry here. The difficulty levels are between 6a+ and 8a. The sector called Şelale, or Waterfall, is not very developed so far. You will only find easy and medium difficulty routes in the lower area.

About 15 kilometers southwest of Antalya is the Akyarlar climbing area. Here you climb on limestone rocks, there are about 20 routes with difficulty levels between 5+ and 8+.

All routes are well bolted and secured. At the beginning of the routes, there are mostly very round boulder-like holds, after which the rock becomes increasingly rough and steep.

On Akyarlar Beach there is a rock with possibilities for bouldering and route climbing. Most of the entrances are very hard and slippery - you have to be careful here!

Most of the climbing courses are held in the Geyikbayırı area. There are courses for beginners and advanced climbers and for people who simply want to improve their climbing technique.

Bookings for a camp lasting several days usually include excursions to the surrounding area. Climbing equipment must be brought along. Missing parts can usually be purchased locally.

What are the prices for climbing courses?

The prices of climbing courses vary depending on the provider, but on average you can expect to pay 90 euros per person for a one-day course.

What is the best season for climbing in Antalya?

Due to the Mediterranean climate, the best season for climbing in Antalya starts at the beginning of September and goes until the end of May. The summer months are too hot and humid.

Do climbing schools provide any equipment?

As a rule, the schools do not provide any equipment. Everyone must bring their own basic equipment. However, missing items can be purchased locally.

There are numerous opportunities for mountain climbing in the Antalya region. The largest climbing area, Geyikbayırı, is only 15 kilometers from Antalya. There are climbing routes of all degrees of difficulty and all levels here.

Due to the Mediterranean climate, the best season for climbing in Antalya starts at the beginning of September and goes until the end of May. During the summer months it is too hot and humid. Numerous canyons in the region offer opportunities for guided canyoning and hiking.

Check out more guides for sports in Antalya below.

The Complete Guide to Sports in Antalya

The Complete Guide to Sports in Antalya

Guide to Water Sports in the Antalya Region

Guide to Water Sports in the Antalya Region

Yoga Retreats in the Antalya Region in Turkey [2021]

Yoga Retreats in the Antalya Region in Turkey [2021]