Antiphellos was one of the oldest settlements in the Antalya region and was an important Lycian port city.

Today's lovely holiday destination, Kaş, was founded on this ancient city. That's why remains of Antiphellos can be seen scattered around in the center of Kaş today.

In this article, we will show you all the information you need to know so you can explore this place, including access, activities, hotels, and history...

1.
What Can I Do in Antiphellos?
2.
Entrance, Tickets, and Tours
3.
How to Get to Antiphellos
4.
Frequently Asked Questions
5.
Hotels Near Antiphellos
6.
The History of Antiphellos
7.
Contact 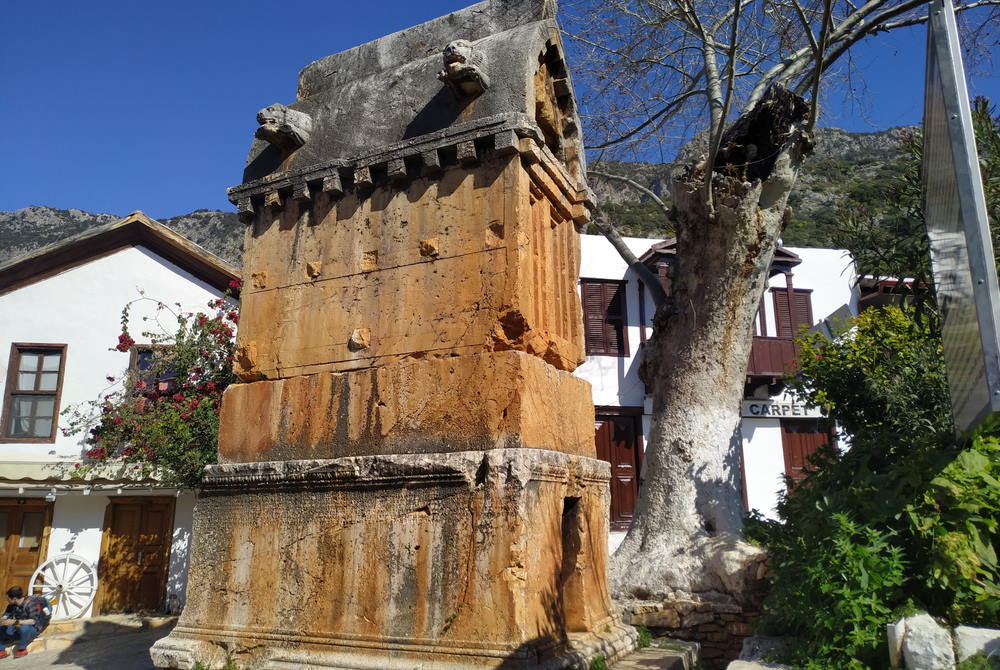 What Can I Do in Antiphellos?

Kaş was a renowned port city in ancient times. The main city "Phellos" was located just above it. This explains why the name "Antiphellos" was given to this place, as it means the "opposite of Phellos". However, over time, Antiphellos developed, got rich and separated from Phellos. It grew into a wealthy city of its own.

Let's explore what remains today from ancient city of Antiphellos, which stood out among the surrounding cities during the Roman period!

Tip: Climb to the top of the Hellenistic theater to get an amazing view of the blue sea and Meis island! 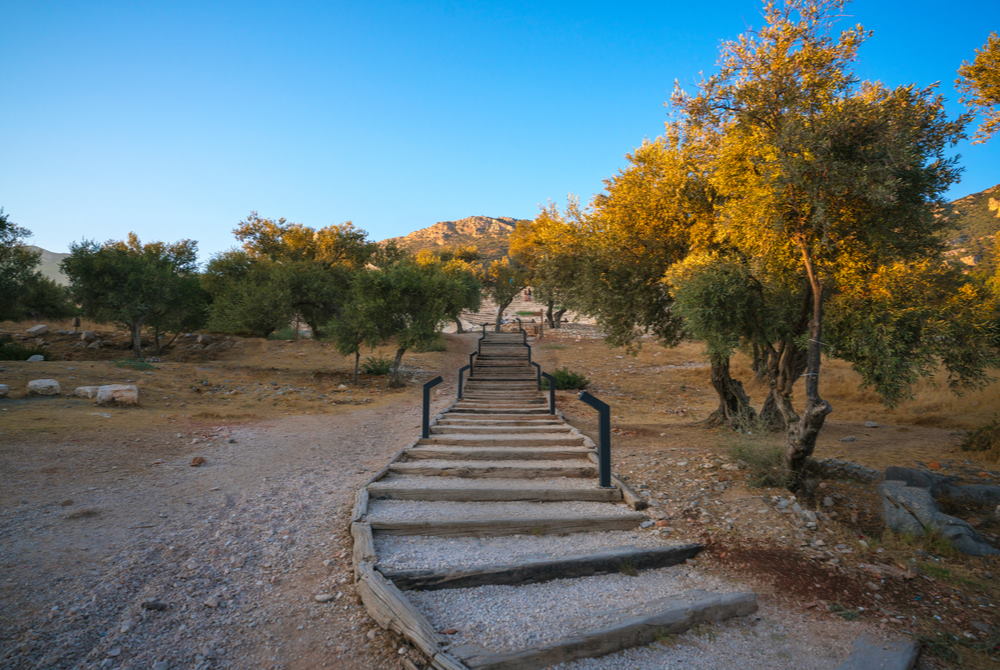 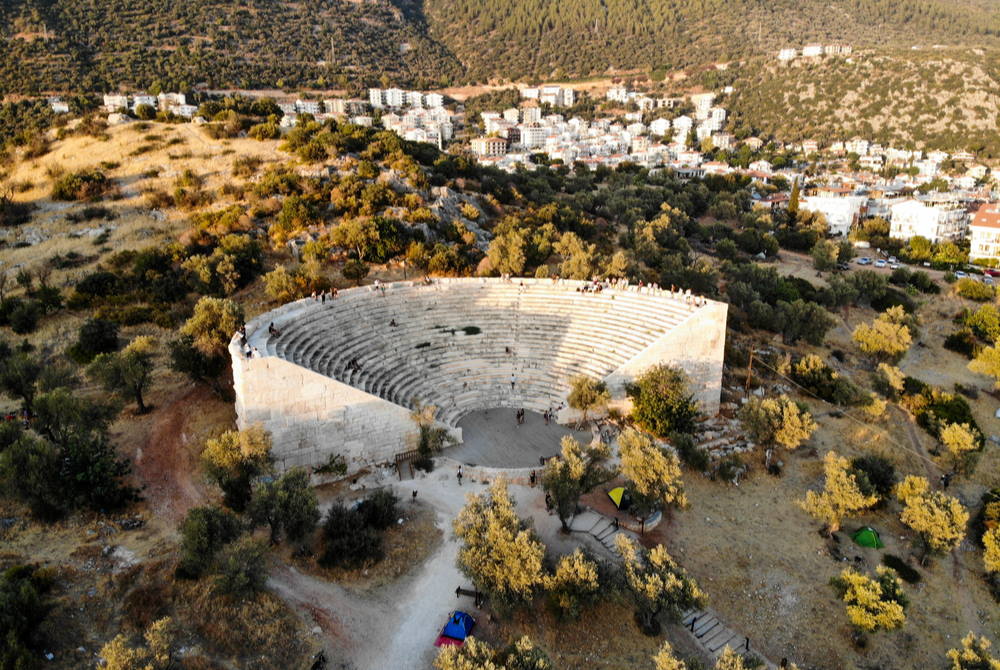 How to Get to Antiphellos

It is not possible to see the ruins of the Antiphellos in any order at the same place. All the ruins are scattered around Kaş. The most famous ruin from Antiphellos is the theater.

Directions to the Hellenistic theater: From the Harbor of Kaş, walk on Necipbey Street towards Çukurbağ Peninsula. You will see Antiphellos theater on the right, facing the sea. 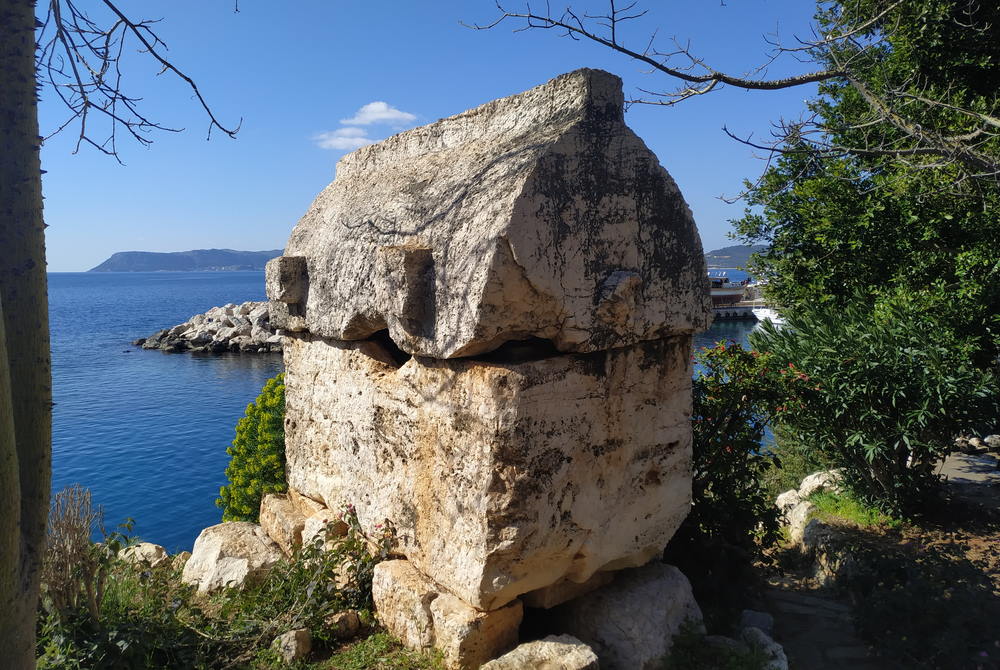 When is the best time to visit Kaş?

June, July, and August are the busiest times for tourism in Kaş, where you can enjoy the excellent beaches and beautiful nature.

Today's lovely holiday destination, Kaş, was founded on this ancient city. Thats why, remains of Antiphellos can be seen scattered around the center of Kaş today.

What can I see in Antiphellos?

Hellenistic Theater: This is the only theater in Anatolia built facing the sea, a great spot to watch the sunset. Local cut limestone was used for the construction of the theater which has the capacity to hold 4,000 people. It was restored in 2008.

Necropolis: To the northeast of the theater, is the city's necropolis. A large part of it was created by carving out the rocks. A sarcophagi made in house shape rock-cut style takes should take your attention here. It is called Akdam Doric Tomb and is the only example in the region with interesting female figures depicted on it. It is believed that this Doric tomb dates back to 4th century BC.

Lion Tomb: It's located in the center of Kaş and has became a symbol of the town. The reason it's called lion tomb, is that there are lion head shapes on the upper parts. This tomb is believed to have belonged to a king or a wealthy person, which dates back to 4th century BC. An inscription is written on it in the Lycian language.

Do I need a ticket to see Antiphellos?

There is no fee to see the ruins of Antiphellos scattered around Kaş.

When we say Antiphellos, actually we are talking about today's Kaş because Kaş was founded on the ancient city of Antiphellos. Here, we share some hotel recommendations in the center of Kaş.

Hotel Sonne: Hotel Sonne guarantees you an unforgettable vacation with its comfort and service quality since the first day it opened. The hotel's wonderful terrace view offers the whole of Kaş and Meis island for your viewing pleasure. It's only 5 minutes walking distance from the Kaş Antique Theater and 2 minutes from downtown. Address: Andifli Mahallesi Yeni Cami Caddesi No:6, Kaş

Hideaway Hotel: Hideaway is a small family run hotel, located in the most beautiful part of Kaş. Hideaway and its roof top terrace offer magnificent views over the town and the Mediterranean. Address: Anfitiyatro Sokak No:7 Kaş Merkez, Kaş 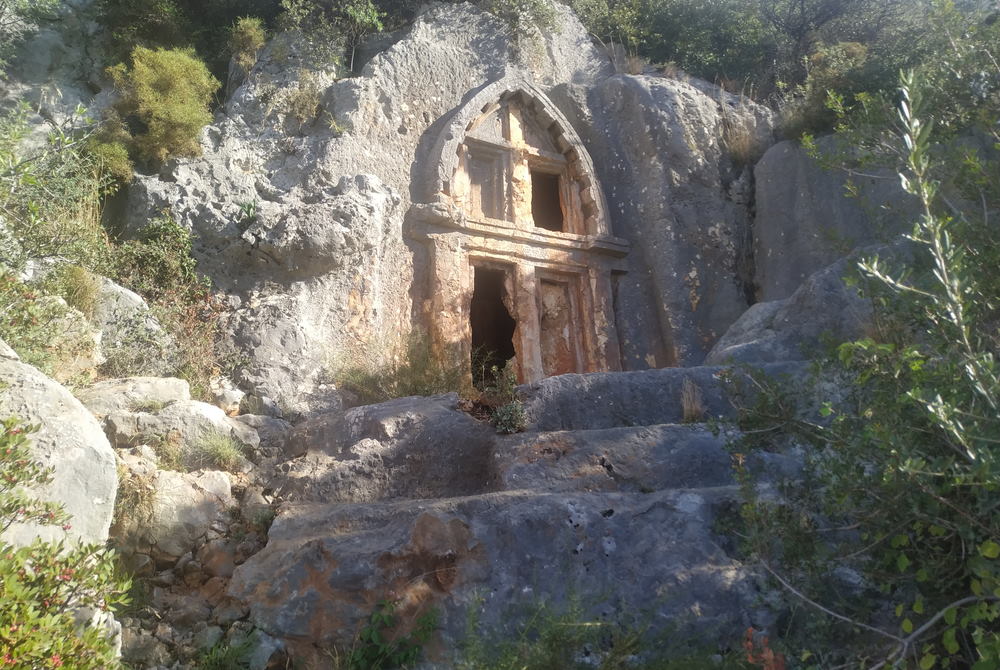 The former name of Antiphellos is "Habesos". The ancient city of Antiphellos was established on the steep slopes of the Taurus Mountains in the 4th century BC. It was surrounded by peninsulas, islets, and Meis Island at the point where it meets the sea. The people of Antiphellos used the Phellos Port, one of the most important ports in the region.

Antiphellos became a wealthy city in the Hellenistic period. This transformation continued into the Roman period as well. The region developed thanks to the cedar wood and sponge trade.

As a result of the Christianization of Rome, Antiphellos remained the episcopal center of the metropolis of Myra (Demre) until 9th century AD.

During the Seljuk Period, its name was changed from Antiphellos to Andifli, but the city gradually lost its importance.

Get more information about other important historical monuments in Antalya on our dedicated page.