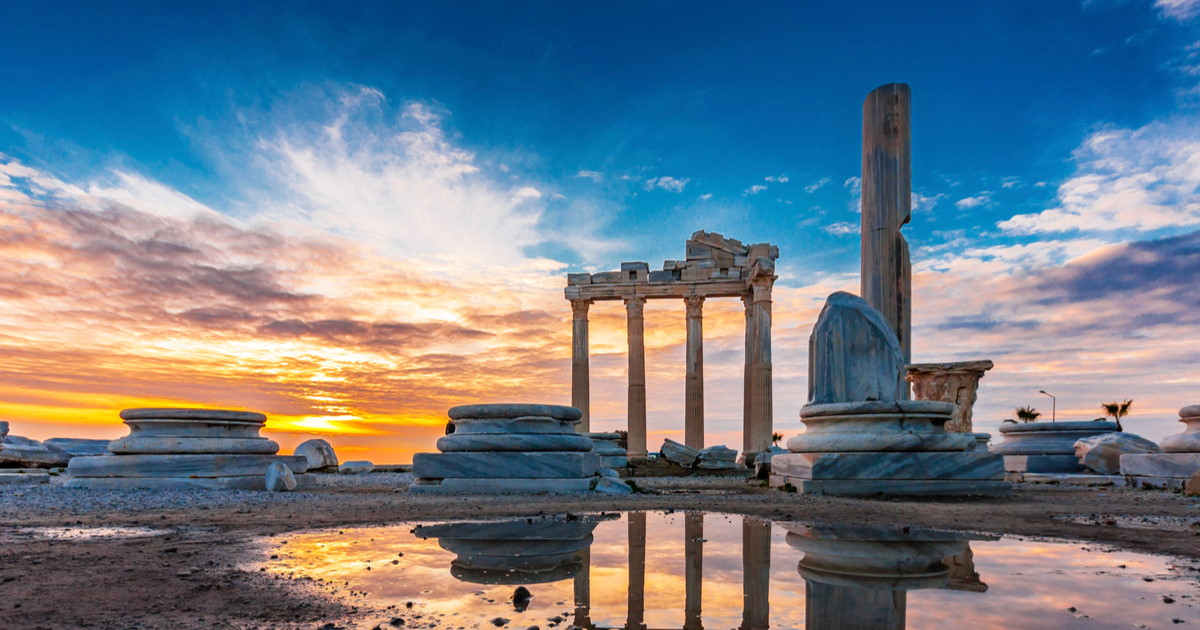 Side's old town is one of the most important and culturally rich towns in southern Turkey.

With charming streets, plenty of restaurants and shops, and old ruins to visit, you are sure to enjoy a fulfilling stay in Side's old town.

Side's old town is 60 km from Alanya, on the coast and also provides very good beach activities for both young and old.

In this article, we will help you spot the 10 best things to do in Side's old town during your stay in the Antalya region, including attractions, sights, restaurants, shopping, and landmarks on the peninsula.

1. Ancient Theater in Side 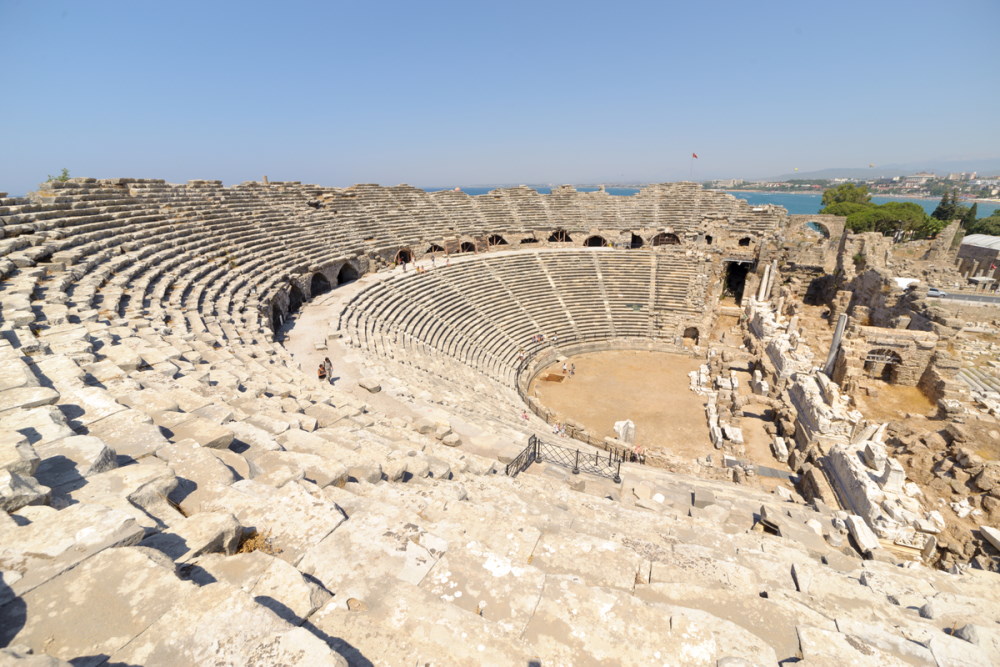 The ancient theater, which stands majestically in the heart of Side's old town, is one of the most impressive sights in the city. It dates back to the 2nd century AD and was able to accommodate 15,000 spectators.

By paying a small entrance fee, you can explore the well-preserved ruins of the Roman-style amphitheater and immerse yourself in the time when gladiator fights were held in this place.

Keep in mind that Aspendos in Antalya is also a popular ancient theater in the region. 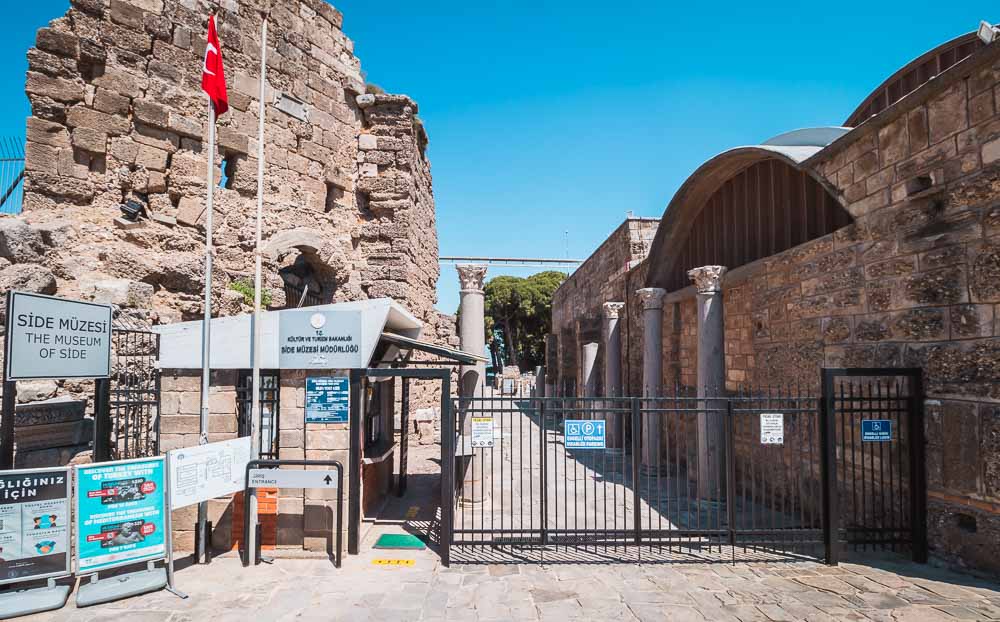 Side Archaeological Museum houses a fascinating collection of ancient artifacts from Side and nearby excavation sites. These include sarcophagi, statues, friezes, jewels, and coins. Weapons, objects used in daily life, and religious accessories are also on display.

Additionally, the building itself is a highlight in its own right. As a matter of fact, the Side Museum, next to the ancient theater, is located in the ruins of a Roman bath.

There is an entrance fee for the museum. Keep in mind the Antalya Archaeological Museum is the most popular museum in the region. For more information, check out this page on museums in Antalya. 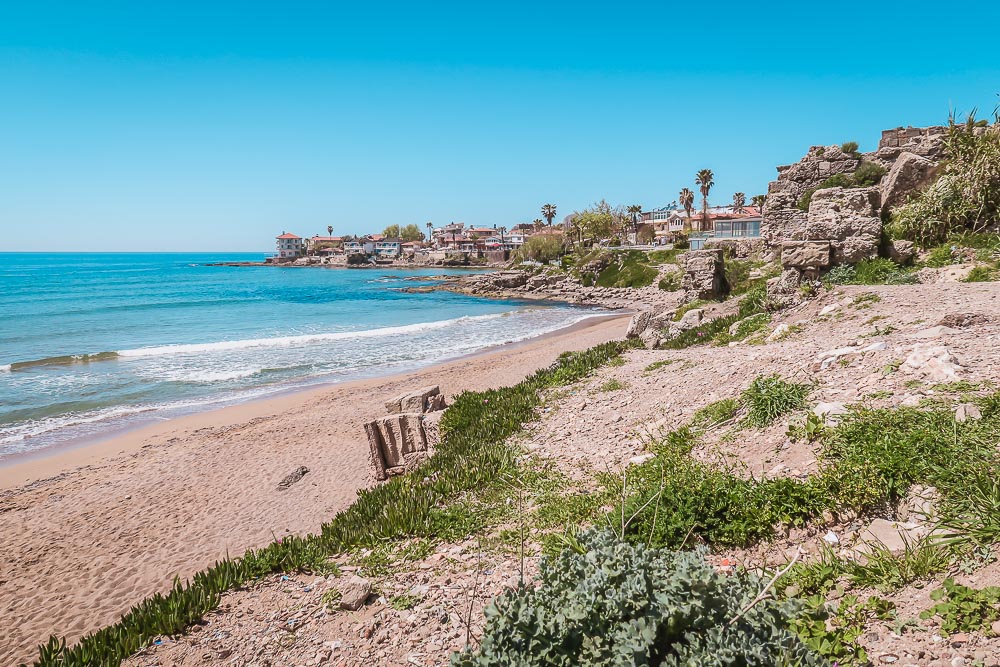 There are two beaches in the old town of Side.

You can find a very nice beach with sunbeds, fine white sand, and blue waters on both the east and west of the peninsula. Both beaches are very clean and shallow.

The beach on the eastern side is larger. There are many restaurants, beach bars, and cafes. But you can just as well find a spot to spread out your beach towel and listen to the sound of the waves.

For more information, check out our page about beaches in Antalya. 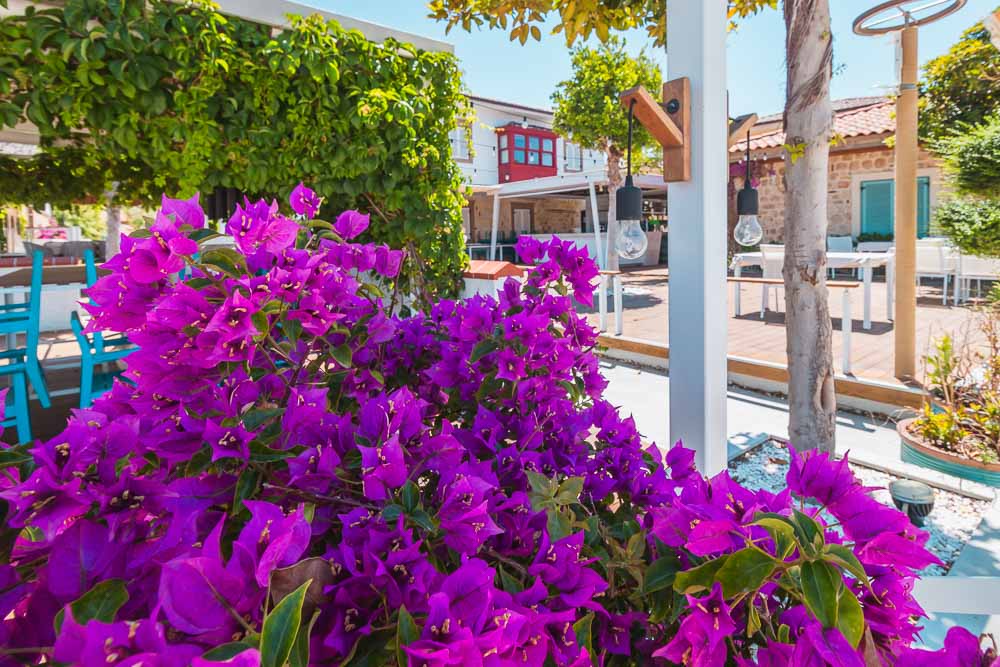 Side's old town is home to a number of restaurants serving Turkish delicacies as well as international cuisine. However, compared to other parts of Antalya, the prices here are more expensive.

We highly recommend that before ordering, be sure to get the menu and check the prices. By doing this, you can avoid unpleasant surprises, where in the worst case, you find that instead of 40 TL you have to pay 40 € for the dish you ordered.

In the event that there is no indication on the menu, it's always best to ask if the prices are in TL.

Read More: Local Food in Antalya: 22 Dishes You Have to Try! 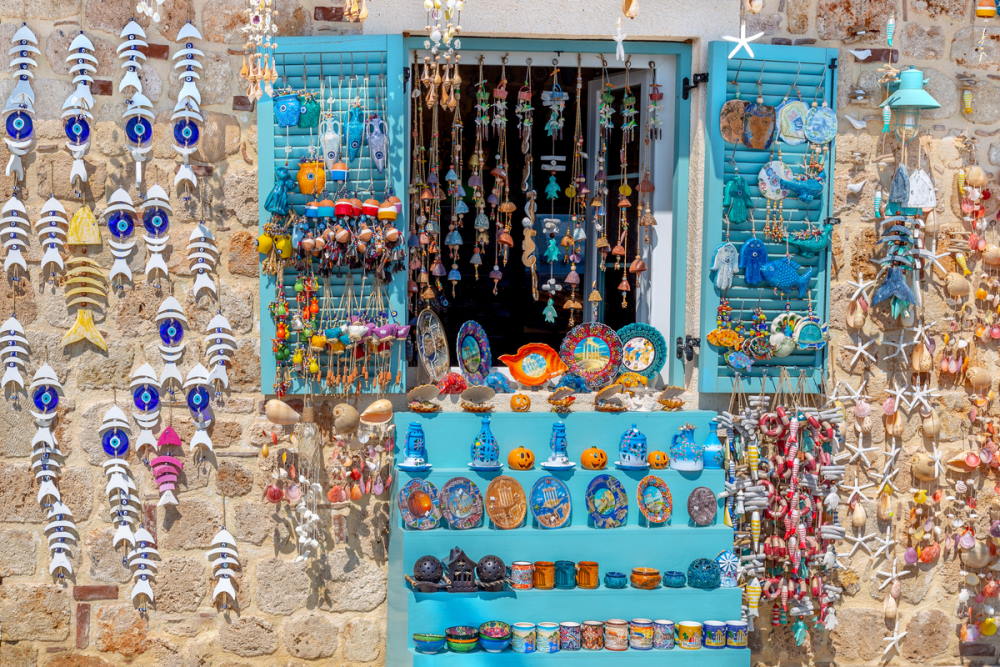 Side's old town is a great place for shopping. Shops are lined up close to each other and offer the most diverse goods, such as clothing, Turkish souvenirs, jewelry, and leather products. However, Side is also a bit more expensive than its neighbors when it comes to shopping. Therefore, when bargaining in the markets, you can expect prices to be even higher than they usually are.

One thing to watch out for, as a tourist, is people trying to sell you "fake coins". You might encounter these people anywhere in the old town. As a rule, this is a scam. But, even if it was a real ancient coin, you would face serious consequences at Turkish customs, which is why you should avoid buying one at all costs. Find more information about shopping in Antalya here. 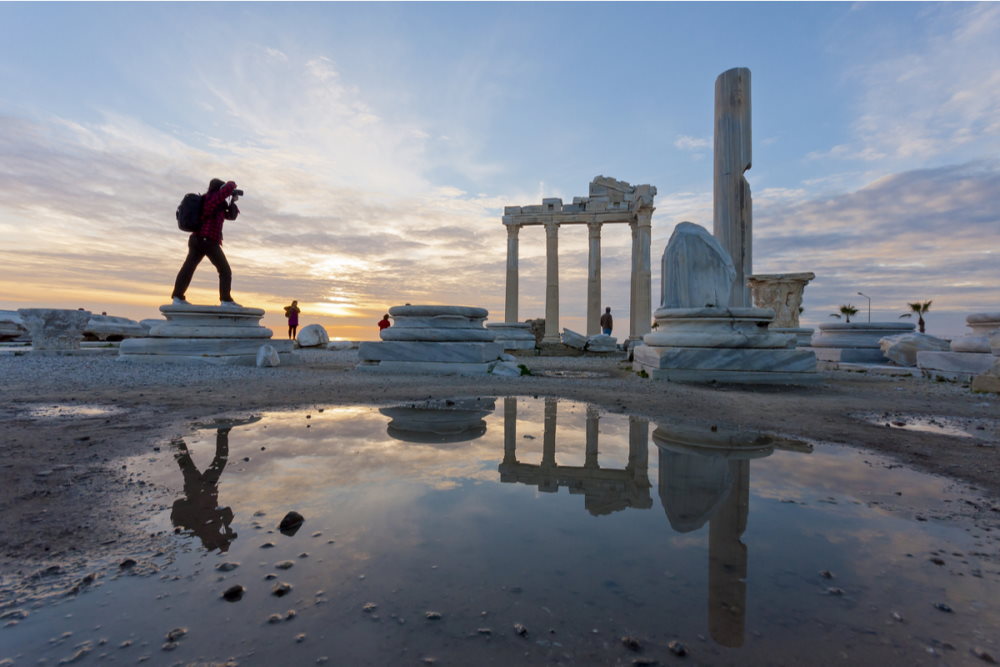 The majestic Apollo Temple is an iconic landmark in Side. The six Corinthian columns that rise from the harbor date back to Roman times. The Apollo Temple is one of the most popular photo motifs in the region and will enchant you, especially at sunset.

The glow of the sunset after the sun disappears behind the horizon, with the Apollo Temple in the foreground and the dazzling sea behind, creates a truly magical scene.

This article about ancient ruins in Antalya will help with your visit to other amazing cultural places in Antalya.

7. Boat Tours from the Harbor 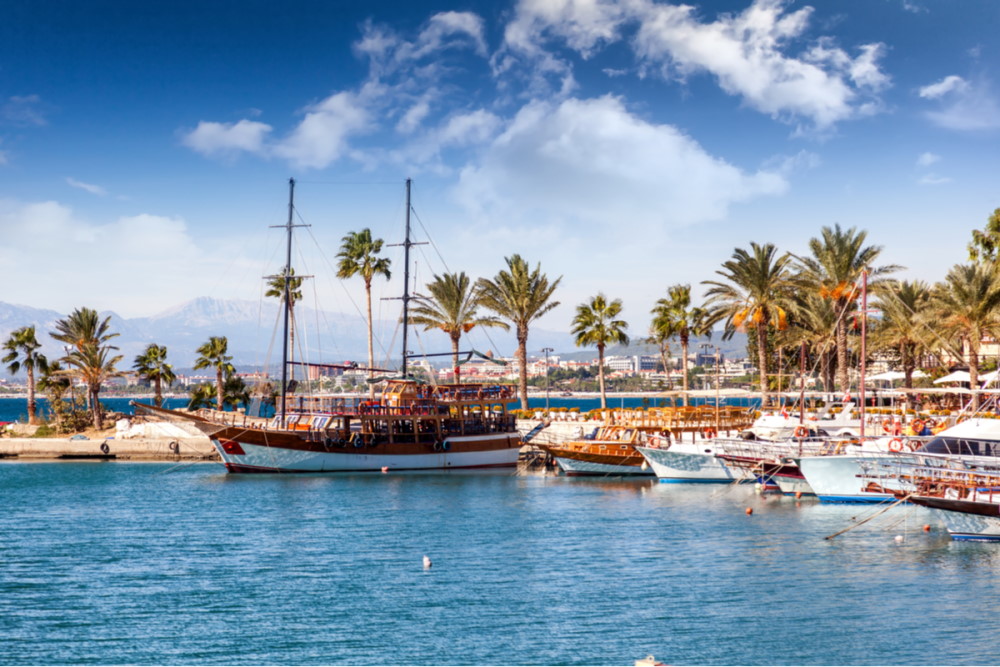 Numerous boat tours depart daily from the harbor. A boat trip along the coast to the breathtaking bays in the area is a one of the most popular things to do in Antalya, especially in the summer.

Boat tours on a pirate ship, in particular, are a highlight for many vacationers, and especially for children. Find more amazing attractions to visit in the Antalya Ticket Shop.

If you are traveling with your kids, this article about things to do with children in Antalya will give you inspiration, for sure! 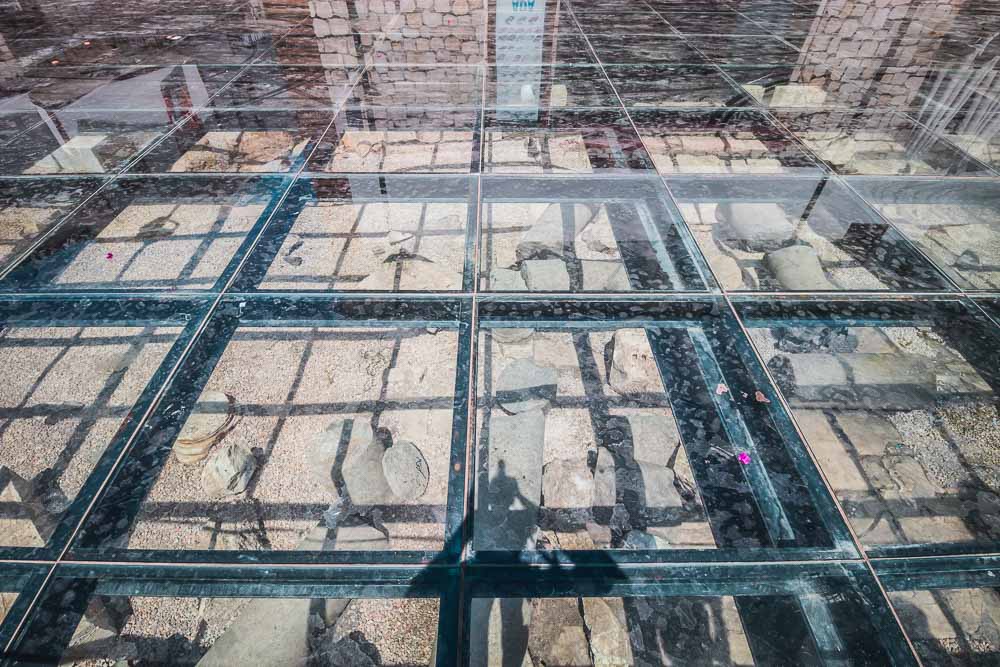 This is a very special attraction hidden under the streets of Side. Wandering through the alleys of Side's old town, you might unexpectedly come across glass floors that show the ancient ruins below them that were found during construction work.

Throughout the old town you might stumble upon these glass plates and admire excavations in the ancient city. At night they are illuminated, which gives these ancient findings a particularly mystical appearance. 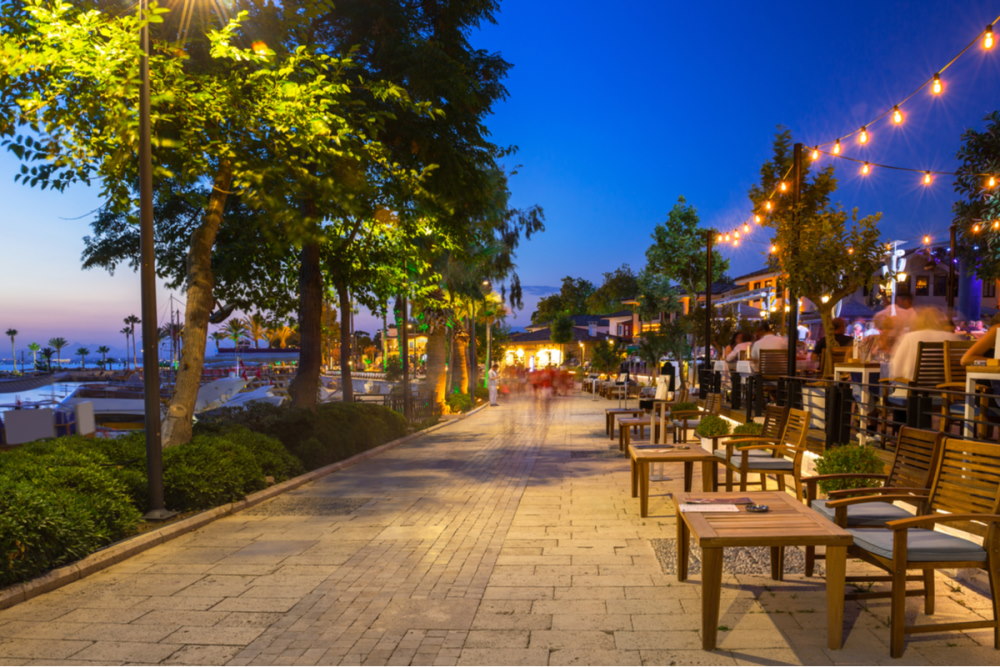 The old town of Side will excite you with its vibrant nightlife. There is always something going on! Locals and tourists alike enjoy spending time here in the evening.

What's especially popular is the promenade, where many open-air clubs, bars, and restaurants are lined up, serving everything from delicious cocktails to wine and ice-cold beer. 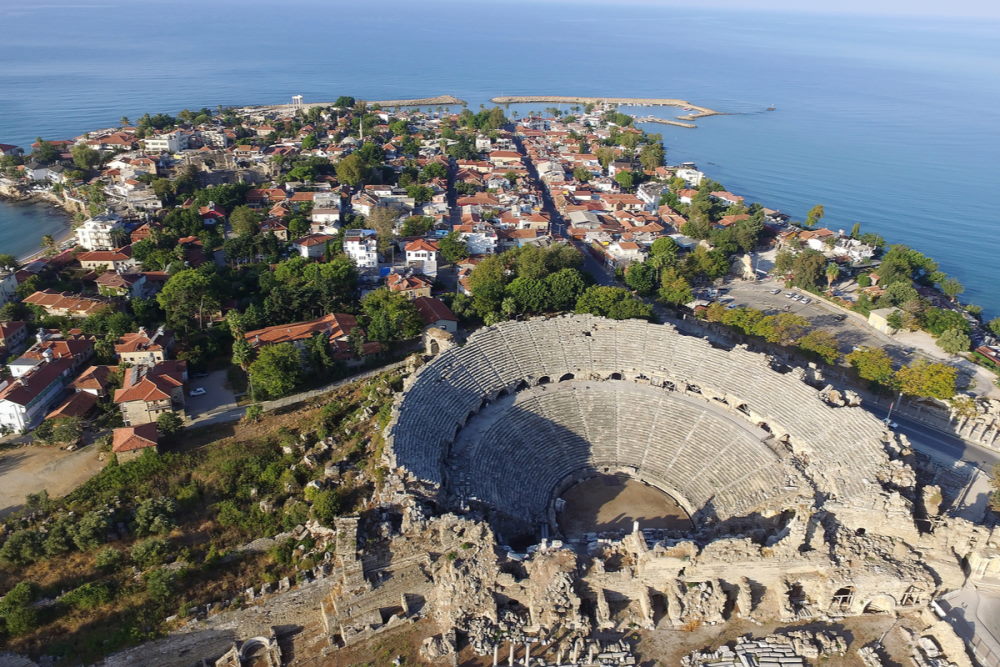 With its 3,500 years of history, Side's old town will amaze you with ancient ruins from Roman and Byzantine times. These include:

(Link to the map)

100+ Things To Do
Resort Deals in Antalya

If you liked this article, mention it in the comments below and make sure to check other towns and things to do in the Antalya Province:

22 Things To Do in Antalya City [with Map]

22 Things To Do in Antalya City [with Map]