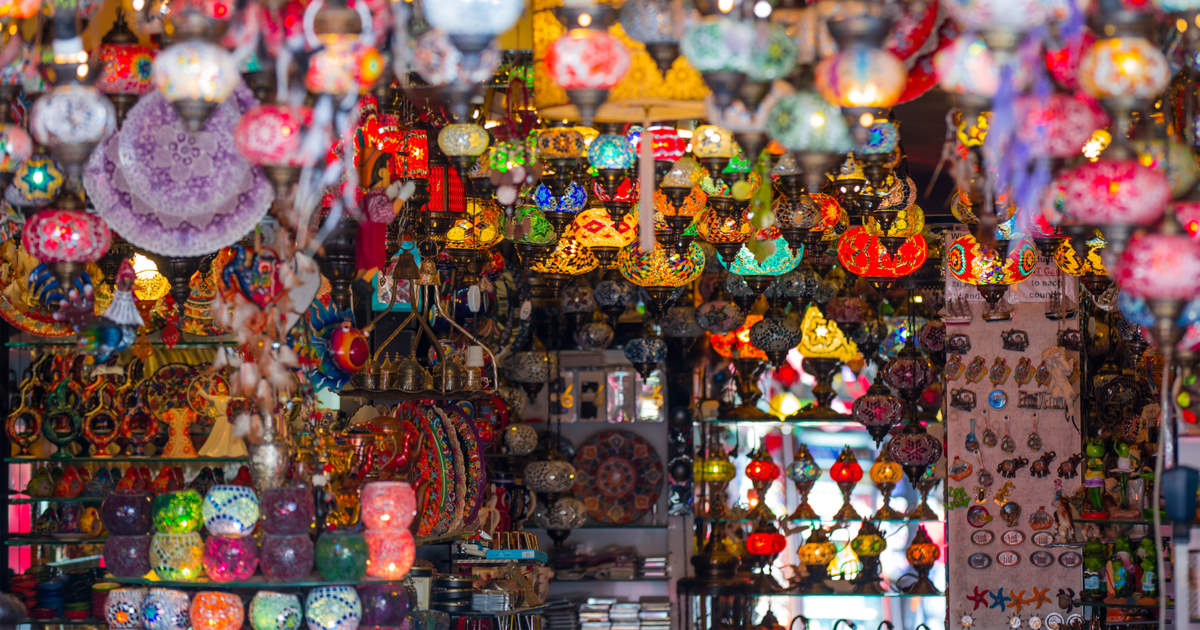 What would a vacation be without souvenirs to bring home for your loved ones?

In Antalya the choice is huge and the variety nearly unlimited. Whether you are more in to classic or traditional souvenirs or something more unique, you can find everything here.

As in any city, the landmarks and sights in Antalya are available in many forms of souvenirs (cup, plate, glass, postcard, poster, T-shirt, bag, magnet...), everything can be found.

But there are also souvenirs that are unique to Antalya and Turkey and are typical items you can find in the city and the country.

We have collected 20 unique souvenirs ideas for you to bring home from your trip to Antalya. 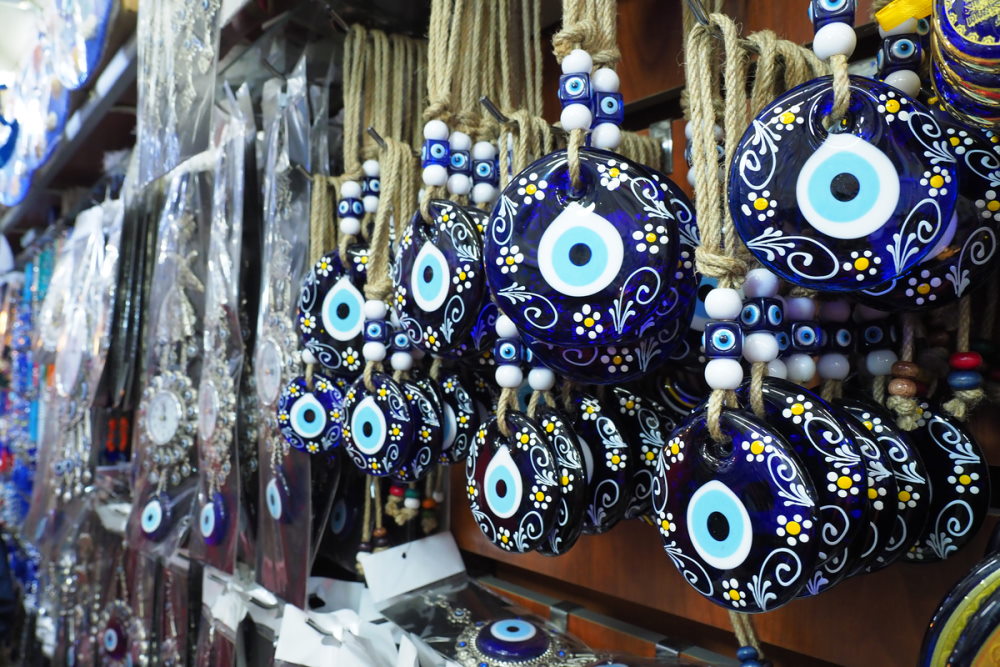 Many cultures believe in the evil eye and its tradition dates back to prehistoric times. Even then, amulets in the shape of eyes were made to protect against the envy and jealousy. It was believed that the eyes were the sources of harmful rays and thus could bring bad luck and misfortune on other people.

According to a recent survey, 66% of all Turkish people still believe in the evil eye and use talismans to protect themselves.

Nazar Boncuks are mostly made of glass and available in all shapes and sizes, individually as keychains, earrings and other jewelry, chains, on cups and plates, and much more.

The eye is always blue, as blue is considered a strong color and thus should be able to absorb the negative energy and protect the wearer of the talisman from the evil eye.

It's an interesting souvenir and also a symbol of Turkey. 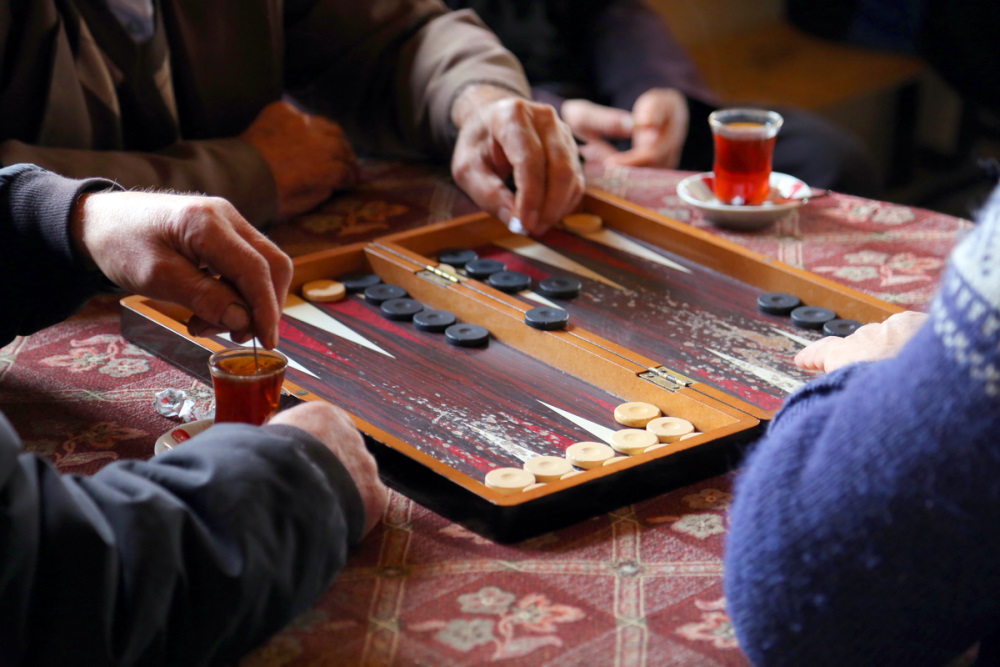 It's believed that Tavla, which is very similar to Backgammon, was played in ancient times. Definitely, we know it has existed since about 50 A.D.

The game was played all over Europe in the Middle Ages under a variety of names until it was banned by the church.  The church then ordered the burning of all boards, so the collapsible board was invented, disguised as a book.

Today, Tavla is very popular in Turkey and is played by all ages on almost every occasion. 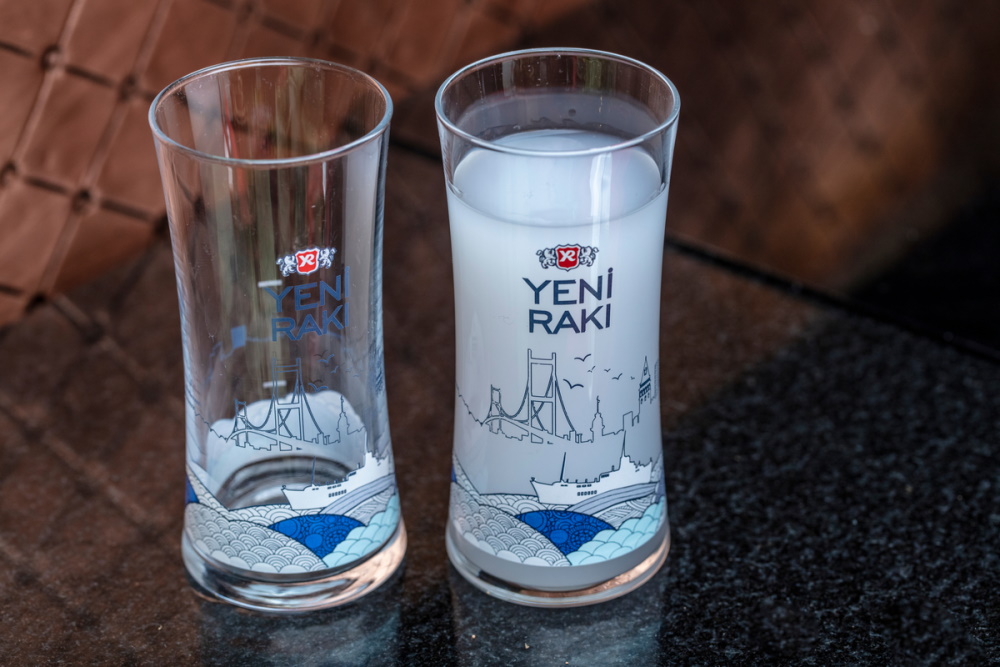 Among alcoholic beverages, rakı is the Turkish national drink par excellence. It's made from ripe grapes, which are fermented and distilled. Anise and fennel seeds are then added and it's distilled again. The drink has a licorice-like taste.

Rakı can be enjoyed pure, but traditionally it is mixed with water and enjoyed with hors d'oeuvres, called meze in Turkish. When combined with water, the anise drops out and the drink turns a milky white color. It's also sometimes called lions milk, or aslan sütü in Turkish, because of it's white color.

The clear liquor has an alcohol content of 40-50%. The most famous varieties are Yeni Rakı and Tekridağ. 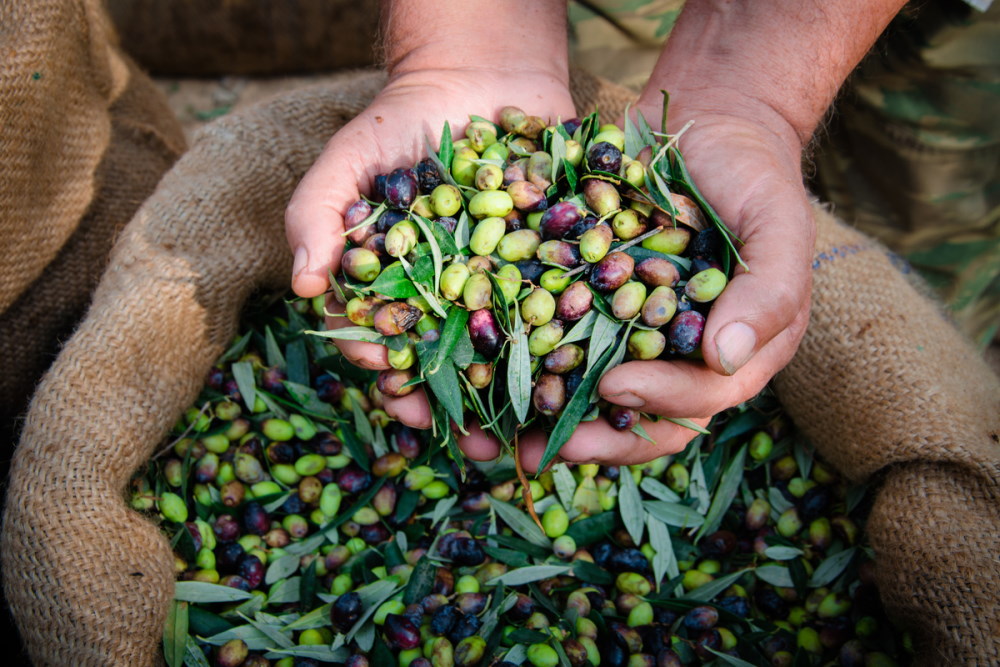 Olive oil was first produced as early as 8000 years ago. The oil is obtained by crushing whole olives and then cold pressing to extract the oil. In Turkey, there are more than 50 varieties of olives and a very rich selection of olive oil.

If you would like to recreate some of the dishes that you ate on vacation at home one, you should take a bottle of olive oil with you. 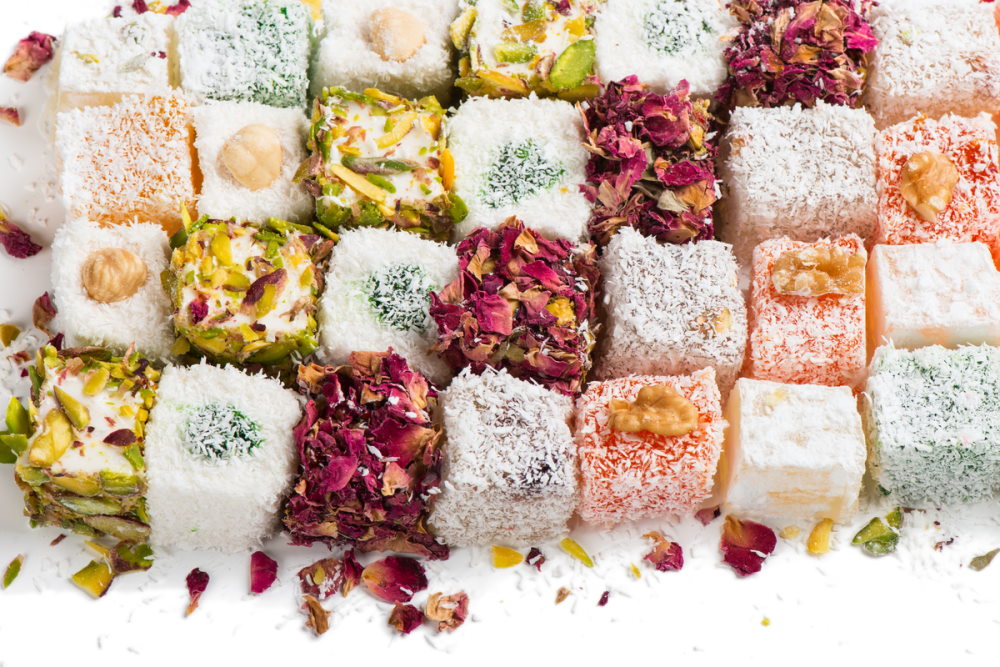 Although called it's Turkish honey, this candy has nothing to do with honey. It's made from sugar, water, and starch. Chopped nuts, almonds, and/or pistachios are mixed into the jelly and various flavors, such as rose water, cherry, or almond are added.

In the times of the sultans, this sweet was reserved only for the upper class.

Just try it! The salesman will let you have a taste before you make your final decision. When you buy an oriental spice mixture, the vacation comes home with you. Spices are sold at every bazaar, the most famous is spice bazaar in Manavgat.

Just shopping for spices is worth the experience, as the most diverse aromas come from the stands. You can find almost everything at the spice bazaar, including coriander, saffron, cumin, hot bell pepper, cardamom, and much more.

Supermarkets often sell roll-shaped packets in which a sample of 6- 8 different spices are individually packaged. 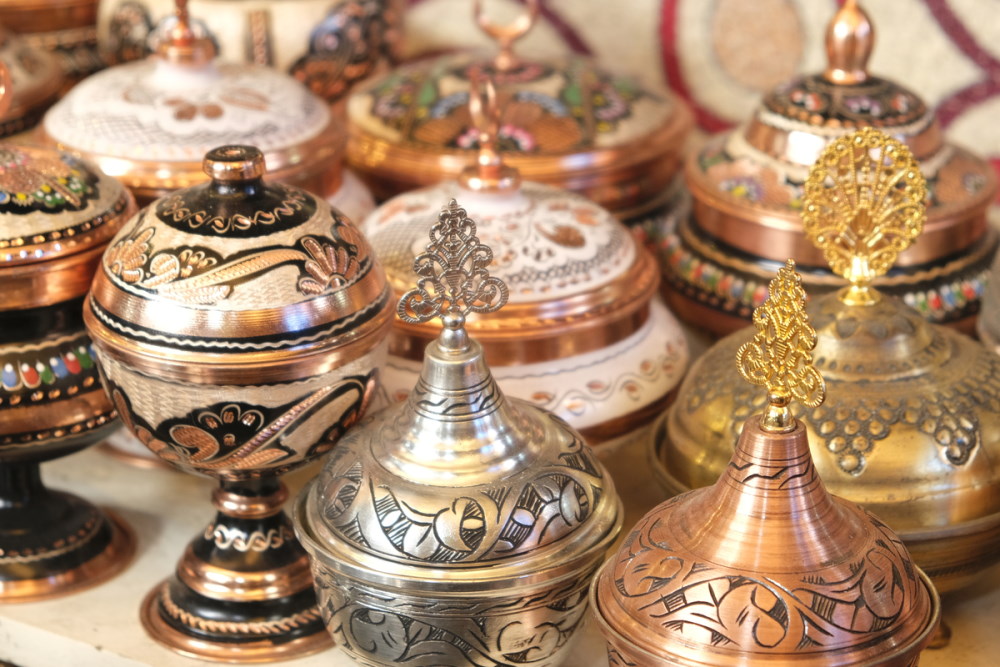 Copper tableware was very popular in Turkey during the Ottoman Empire. Jugs, small pans, pots for making coffee, and tea trays are some of the most popular souvenirs.

Right next to the big bazaar in Antalya, there is a small side street where almost only coppersmiths are located. Here, the copper goods are still made the same way they were a hundred years ago. 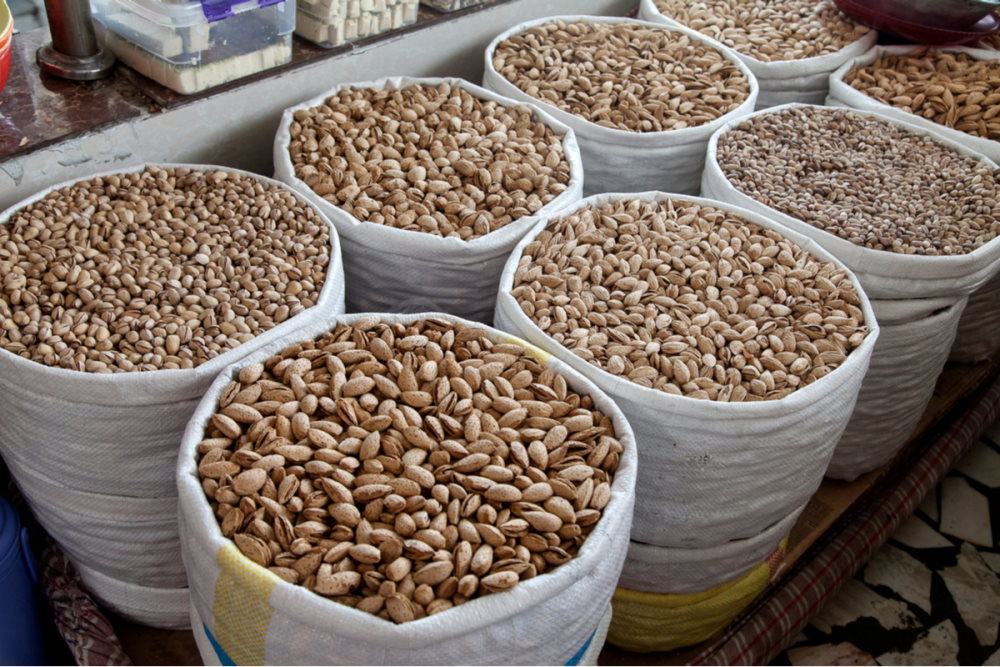 There are large pistachio farms near Antalya. In the past, pistachios were used as a treatment for toothache and cirrhosis of the liver, but nowadays pistachios are not so important in medicine. However, it's believed that due to their high content of unsaturated fatty acids, they are good for the heart and reduce cholesterol levels.

The salted nuts are sold openly in the markets by the price per kilo. Stores that specialize in selling dried fruits and nuts also offer pistachios. Usually you can get them vacuum packed in these stores as well. A very tasty souvenir.... 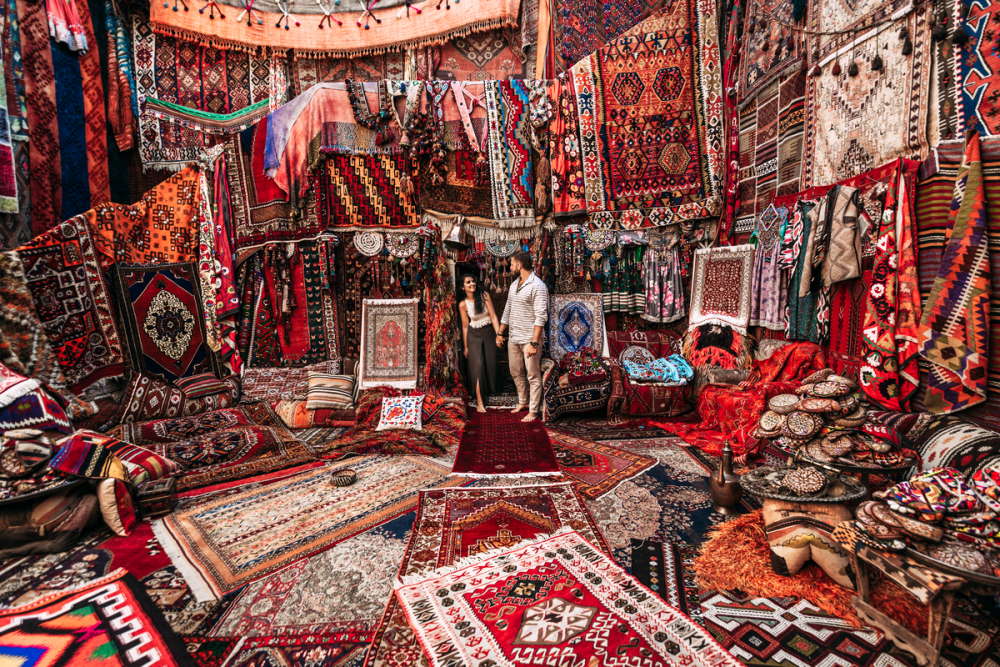 Carpet weaving is a traditional craft that has existed in Turkey for 3000 years. Turkish carpets are the only double knotted carpets in the world and differ in patterns and motifs depending on the region where they are made.

In any case, you should negotiate, but also keep in mind that prices are very, very different depending on the quality and origin.

If you know something about carpets, this is a very special souvenir. 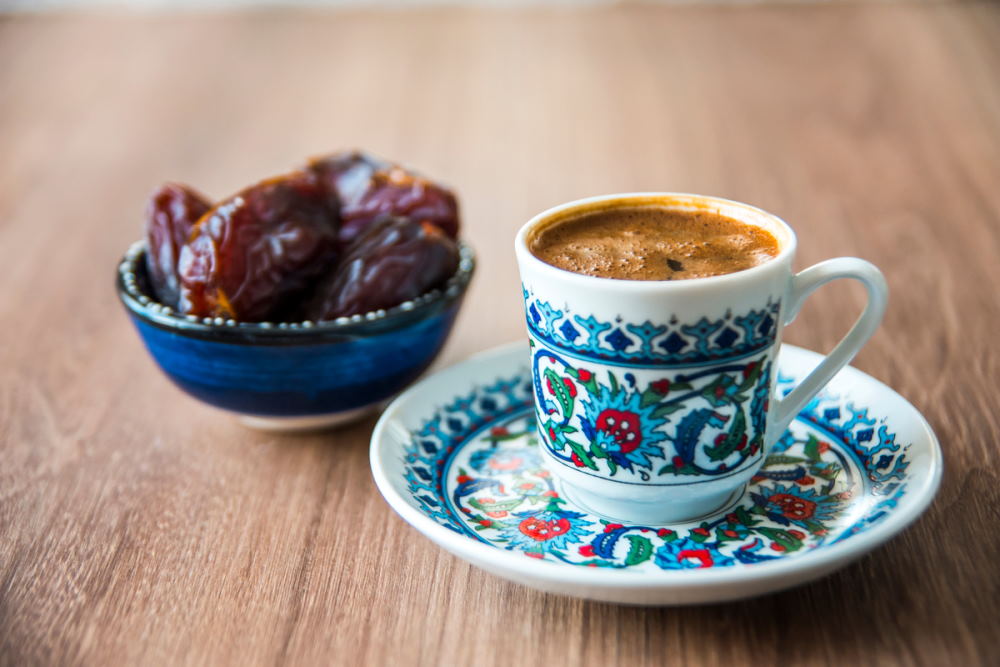 Turkey has one of the oldest coffee cultures in the world. Finely ground coffee powder is mixed with water in a small copper or brass pot and boiled over a low flame until it almost overflows. The resulting foam is equally distributed among the coffee cups. The coffee is then boiled again and poured into the cups.

Turkish coffee is served in small cups, similar in size to espresso cups. They come in a wide variety of patterns and motifs. 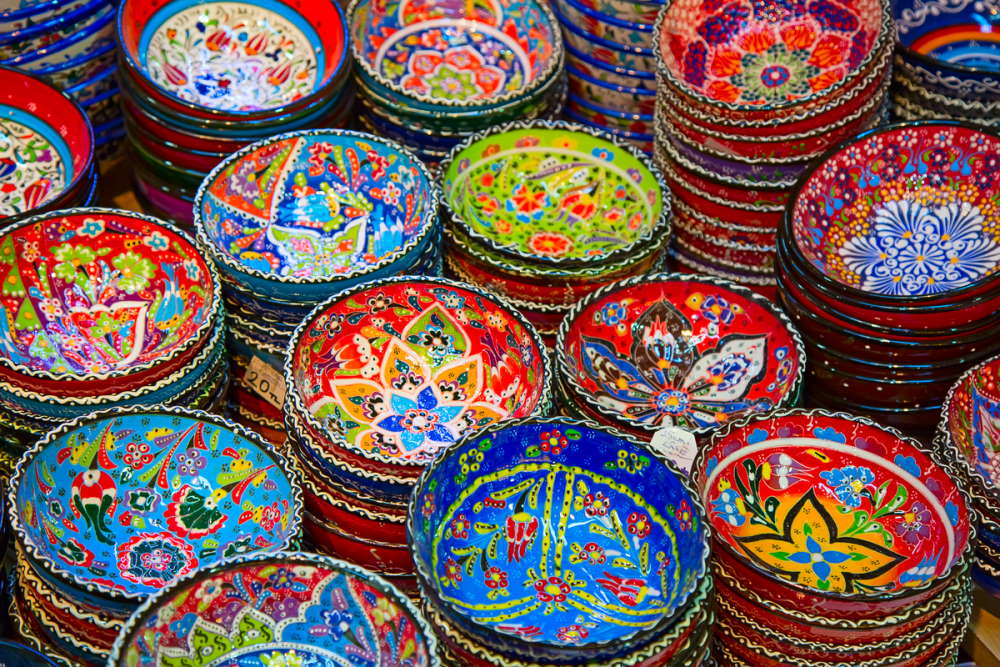 Vases, cups, plates, and knickknacks with colorful motifs can be found in markets and local stores. Ceramic crafts have a long tradition in Turkey, and the porcelain from Kütahya is particularly well known. Colorfully painted ceramic pieces are handmade and hand-painted. They are a popular souvenir and used as decorative pieces. Be careful, they are not suitable for dishwashers. 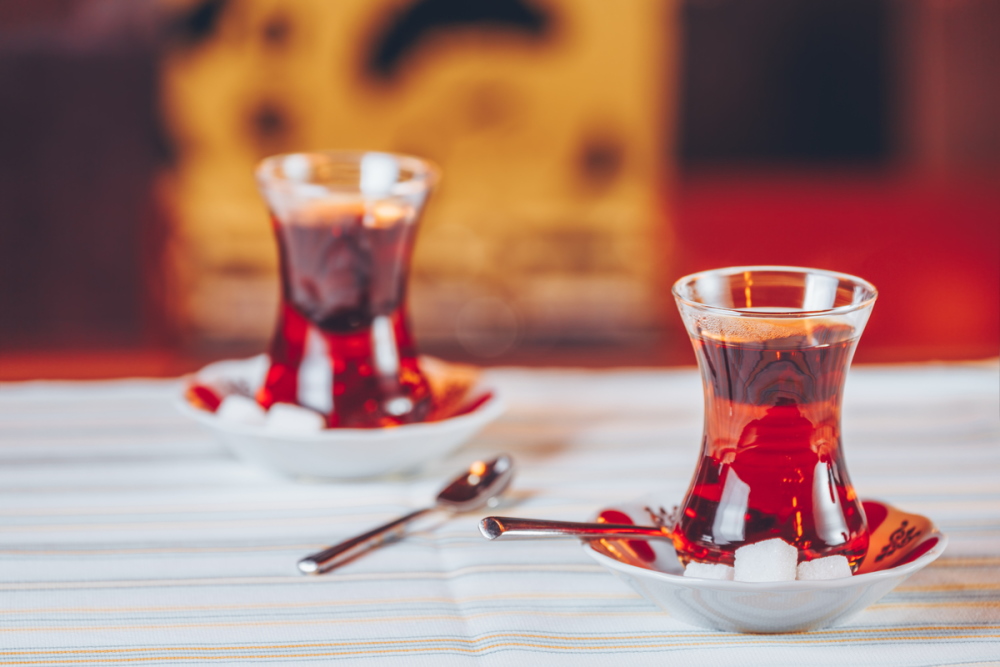 In Turkey, tea is served in small glasses that are narrowed in the middle so that the drink stays hot longer. The glasses of tea are served with small plates underneath.

Turkish tea is prepared in two pots stacked on top of each other, called Çaydanlık, where water is boiled in the lower pot and then poured onto the tea leaves in the upper pot. After the tea is steeped, the strong tea brew from the upper pot is first poured into the glasses, and then the boiling water from the lower pot is poured into this special tea glass. This method allows each guest to decide for themselves whether they want a strong or weak tea.

A tea set is a nice souvenir to take home. 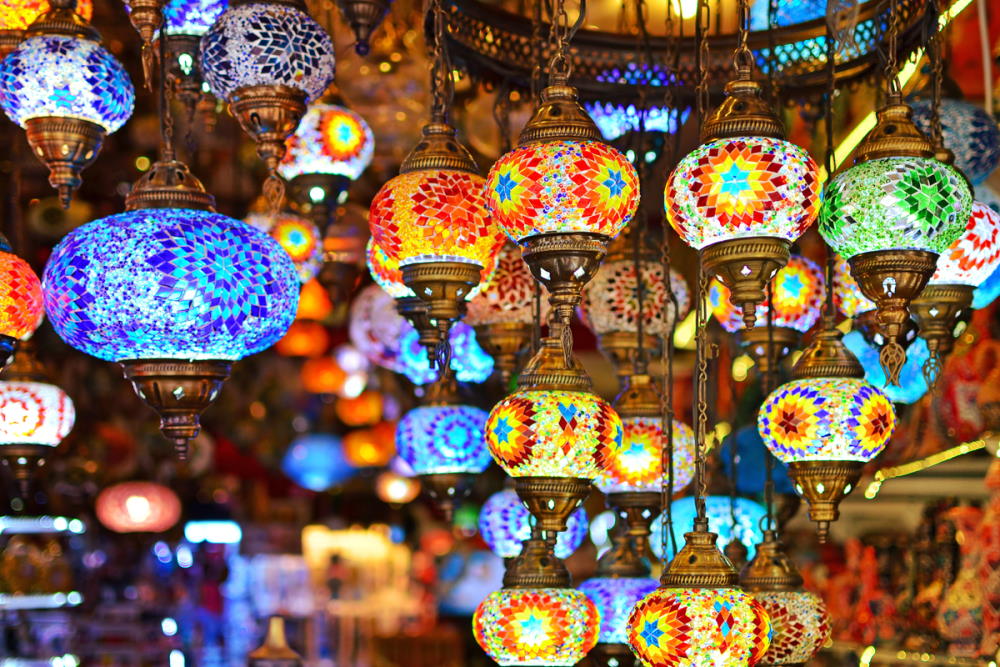 Oriental lamps are made of copper or brass and the lampshade is composed of countless small mosaic pieces of glass. They come in every shape and color, and the decorations and motifs differ depending on the area. Most often they are very colorful, with one dominant color. 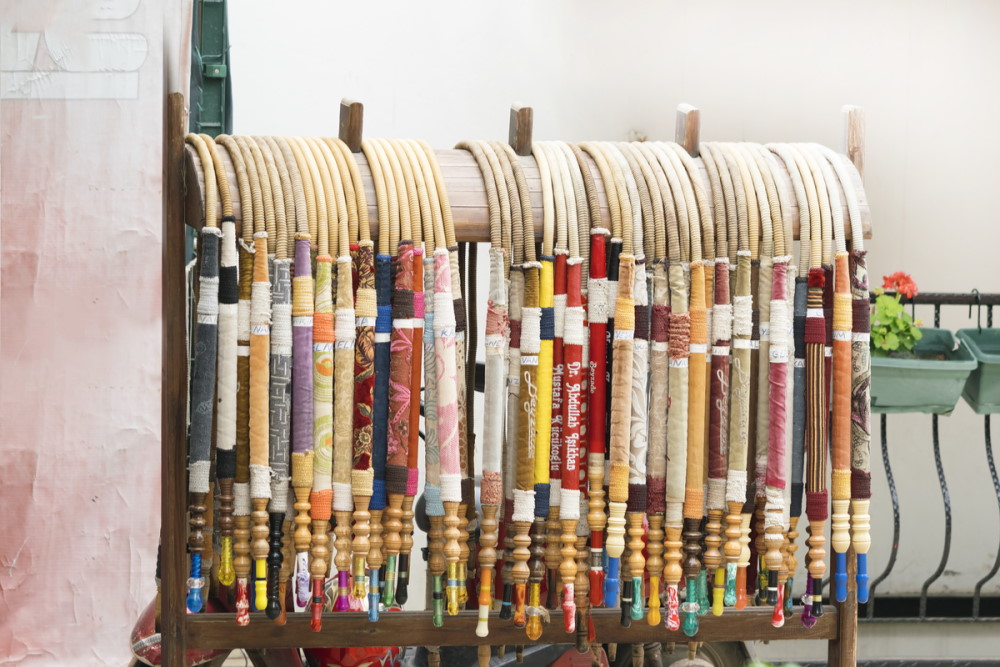 These are called Shisha in Germany, and it's believed to have originally come from India or Iran. When smoking the water pipe, the smoke is cooled and partially filtered by drawing it through a vessel filled with water.

The nargile, as it is called in Turkey, is also becoming increasingly popular as a decorative item.

An original souvenir for all lovers of the Orient... 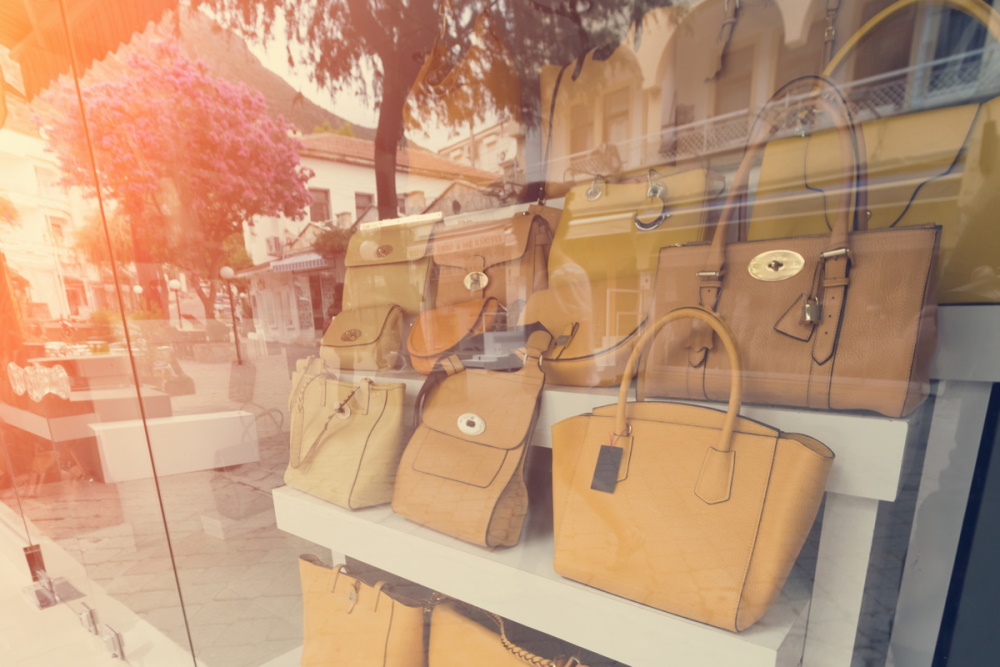 Leather goods of all kinds have always been a popular souvenir from Turkey. The quality varies a lot and you should always check carefully when you buy. If you want, you can also have something sewn from leather according to your own taste. This usually takes only a few days. 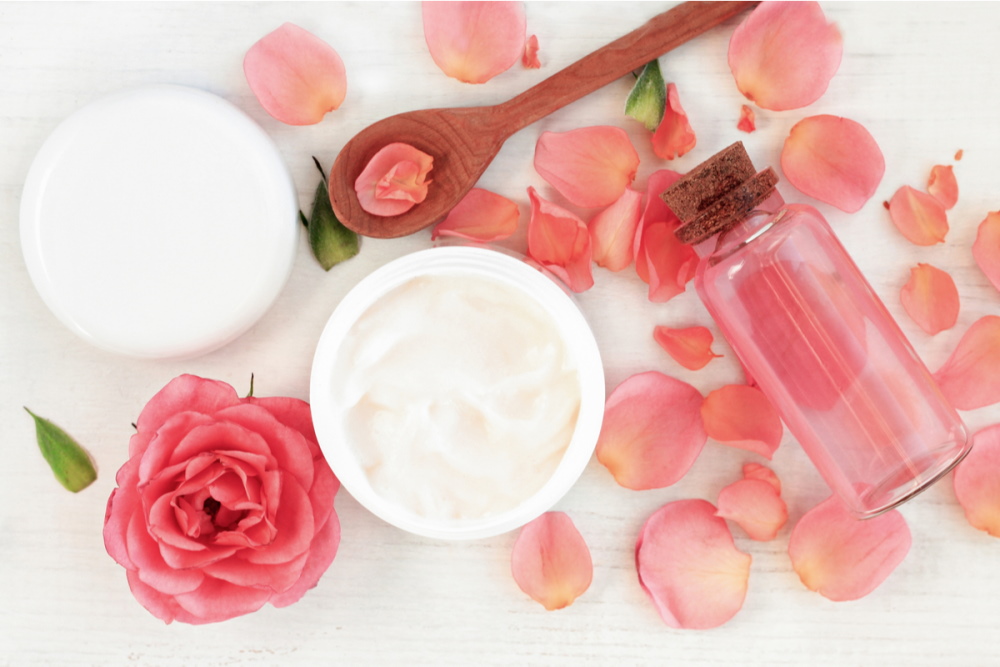 In the interior of the country, about 100 kilometers north of Antalya, Damascene roses are grown in the heights of the Taurus Mountains, in almost endless fields. From these rose blossoms, rose oil is extracted. It's one of the most important basic materials in exclusive perfumes.

Rose water is made from the rest of the blossoms, and the local cosmetics industry uses the blossoms to make rose creams, rose soap, and rose-scented cologne. You should also try rose jam or lokum with rose water. Branded products are offered everywhere at incredibly low prices. No wonder, because these are of course not authentic, but fake products. In some cases, they are have high quality workmanship and are well worth the price.

However, it's forbidden to import fake branded products into the EU and anyone caught by customs has to pay a significant fine. Therefore, it's strongly recommended to buy a well-made Turkish product that does not bear the label of a luxury manufacturer. 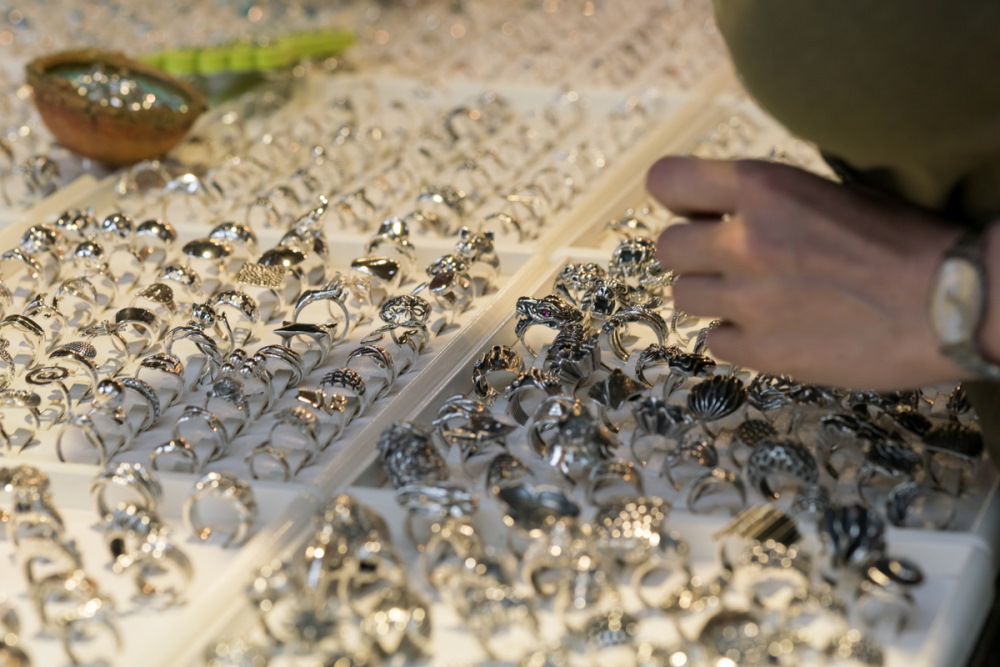 In Antalya, you can see many jewelry stores that have decorated their windows with whole rows of gold ringlets and bracelets. Gold is not cheaper in Turkey, the official price of gold per gram is used in the calculation. However, since the jewelry is made in the country and labor wages are much lower than in other European countries, you can buy high-quality jewelry at reasonable prices.

Serious jewelers, of course, issue a certificate of authenticity. 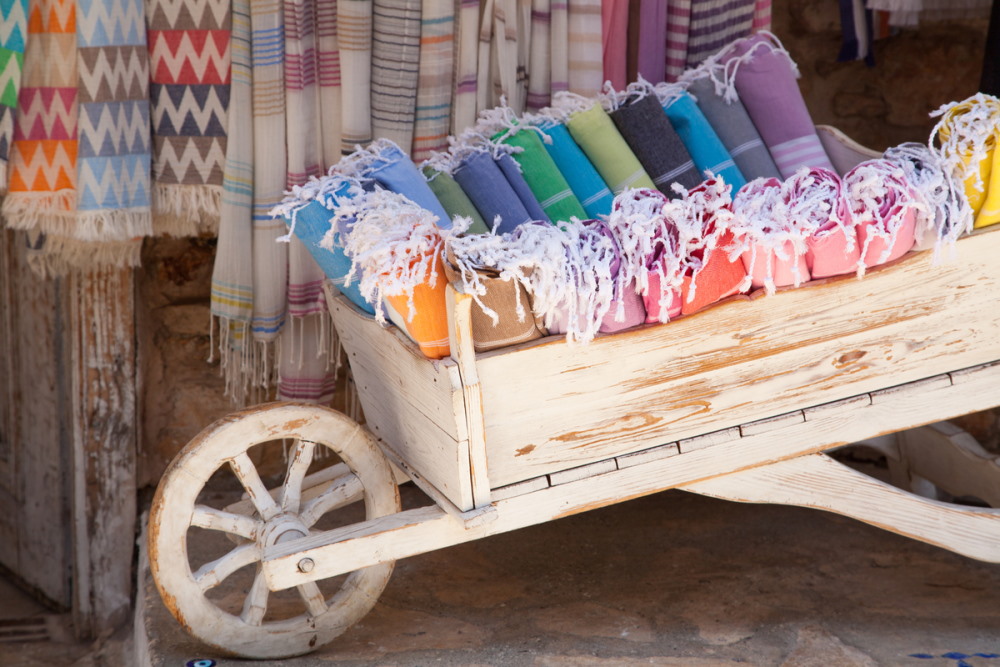 Traditionally these are used in the hamam, or Turkish steam bath. The towels are made of pure cotton and you use them to cover your body during a visit to the hamam. Since they are thin and light, they have started to gain popularity as a substitute for bath towels. They come in all colors and variations.

A very original souvenir and also very practical at the same time... 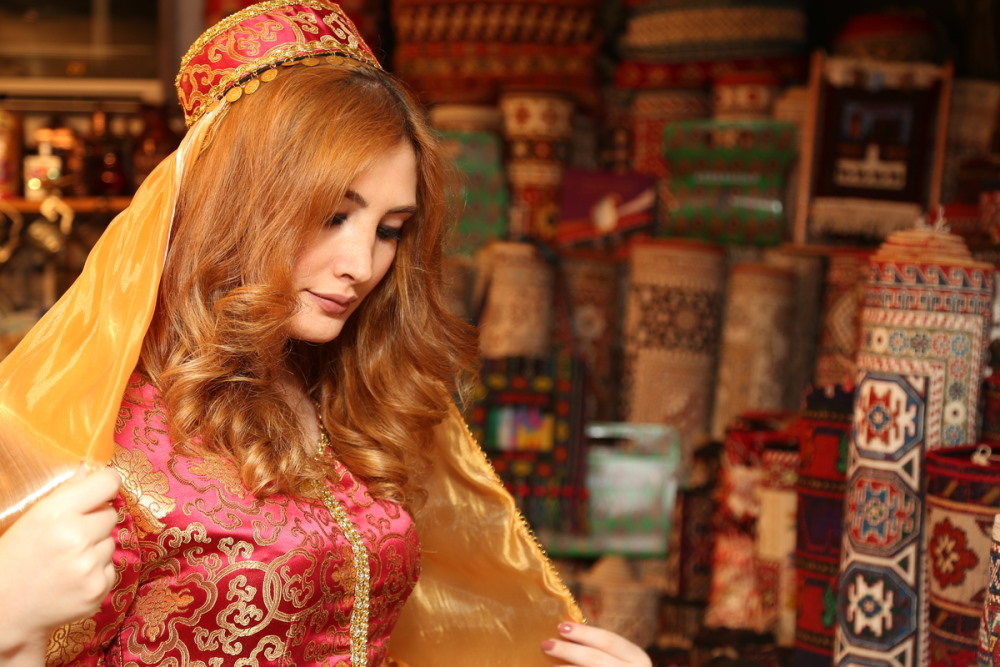 Traditional Turkish clothing varies from area to area. In Ottoman times, clothing was splendidly and eye-catchingly ornamented, usually colorful, with red as the dominant color. There were precise dress codes for different occasions. Nowadays, the importance of traditional dress has decreased in big cities, but in country areas many still hold on to old traditions. In some small villages, for example, you can tell whether a girl is single, married or widowed by looking at her headdress.

The most popular souvenirs are vests and headdresses. If you want, you can also try a Şalvar, the blouse pants that were also fashionable in Europe at one time.

Did you find a good idea of present for your relatives or yourself? Let us know in the comments below!

Best Markets and Bazaars in the City of Antalya

Best Markets and Bazaars in the City of Antalya

Antalya Shopping Guide: What to Buy and Where

Antalya Shopping Guide: What to Buy and Where