Guide to the Ancient City of Aspendos in Antalya: History and Tips 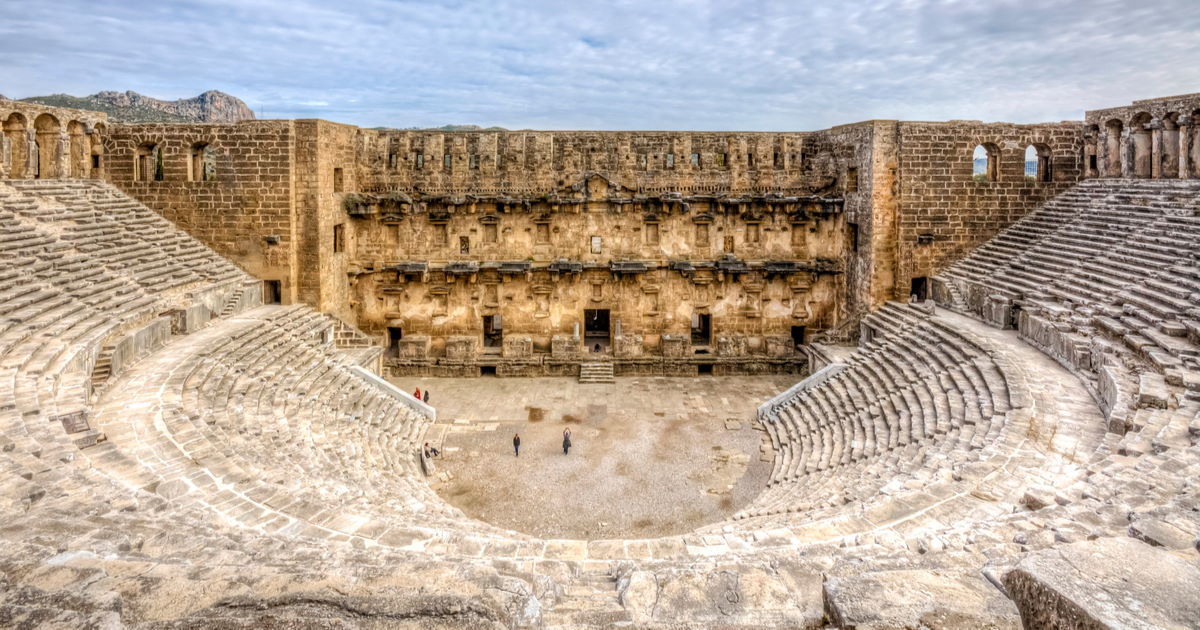 Aspendos is a renowned ancient site in the Turkish Mediterranean with its well-preserved amphitheater in almost perfect condition. It reflects the peak of the Roman Empire with  engineering marvels that have stunned millions of visitors for decades.

The story of Aspendos goes back to the legend of Troy. Ancient sources identify the founders of Aspendos as refugees fleeing from Troy's destruction, as described by Homer.

In this article, we will go though all the important information you need for your visit to the ancient city of Aspendos in Antalya.

1.
What Can I Do in Aspendos?
2.
Entrance, Tickets, and Tours
3.
How to Get to Aspendos
4.
Frequently Asked Questions
5.
The History of Aspendos
6.
Contact

What Can I Do in Aspendos? This theater is one of the best places where you can feel the atmosphere of antiquity. Its wholesome architecture surrounded by the stage and seating rows are quite impressive, once you experience the acoustic features of this place.

The most memorable moments from a visit to Aspendos come from your own imagination, though. Just think about people filling these same seats 2000 years ago! You may even hear them cheering...

The Aquaduct of Aspendos

A visit to Aspendos is not complete without seeing pieces of the ancient aquaducts. The columns and vaults are partly standing behind the tiny hill nesting for the theater. This structure was a part of 25-kilometer long water channel that supplied the city of Aspendos with water. In other words, this engineering wonder brought life to Aspendos.

The Acropolis of Aspendos

Just across the way, to the north of the theater, there are also the ruins of the stadium. When you walk the path between and, then climb the small hill, you reach the Acropolis of Aspendos. Here you can see the remains of other important structures in Aspendos such as the basilica, agora, marketplace, and bouleuterion (the city senate)... How to Get to Aspendos

Aspendos is in the village of Belkıs near a town called Serik. It is less than 50 kilometers from Antalya's city center, when you leave towards the east. So a it takes around 35-40 minutes by car. You can rent a car in Antalya easily.

From the Antalya terminal, you can take a bus to Serik, first. And then, you will find minibuses departing for Belkıs to reach Aspendos.

When is the best time to see Aspendos?

The morning and evening hours are the best time to visit. In the high season, try to avoid the noon hours as there is not much of shade in the theater and around the ruins.

How much does the ticket for Aspendos cost?

The ticket costs 50 TL per person

Is Aspendos worth a visit?

If you have any interest in ancient times and history, it is definitely worth a visit when you are in Antalya

Are there Aspendos tours?

There are daily tours departing from Antalya The History of Aspendos

During the Roman Empire, it's believed that Aspendos was found by the survivors of the legendary city of Troy. Mopsos was the leader of the group coming to this region, which was called Pamphylia back then.

The theater and the aquaduct were part of a legendary story about the king of Aspendos at the time. The story has it that two brothers wanted to be suitors of the princess. The king promised his beloved daughter to the person who could construct the most useful work for his city. In a harsh competition, one brother built the theater while the other built the aquaducts. Even though the water was more essential for the city, during opening of the theater project the king, sitting on the top row, clearly heard the architect whispering from the stage. He said "I deserve your daughter!"

The importance of Pamphylia increased as Roman dominance reached the shores of the Mediterranean. During the 2nd and 3rd centuries, Asia Minor became one of the most prosperous parts of the world. The splendor of Aspendos, from this golden age, is still visible at this stunning theater.

The inscriptions on the structure tell us that it was designed and built by the architect, Zenon, between the years 138 and 164. Its spectator capacity is estimated between 12,000 to 15,000. One of the main factors that kept it in such a good shape is that it remained in use after the empire fell. In the Middle Ages, it was restored several times and used for different purposes like a royal residence or caravan saray.