Guide to Hadrian’s Gate in Antalya: History and Tips 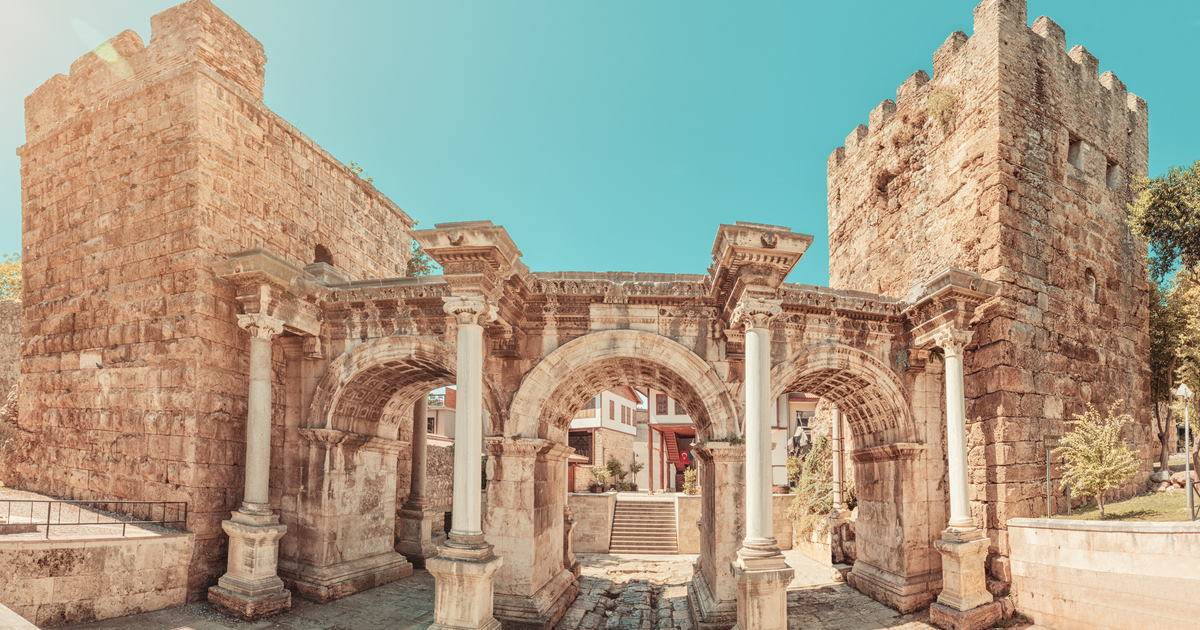 Hadrian's Gate is one of the city's oldest and most important sights.

Hadrian's Gate is considered to be the most beautiful gate of Pamphylia, bearing traces of all civilizations that existed in this region. It's history is interesting too (see below)!

In this article, we will give you useful information for your visit to this important monument in Antalya.

1.
What Can I Do there?
2.
Entrance, Tickets, and Tours
3.
How to Get to Hadrian's Gate
4.
Frequently Asked Questions
5.
The History of Hadrian's Gate
6.
Contact 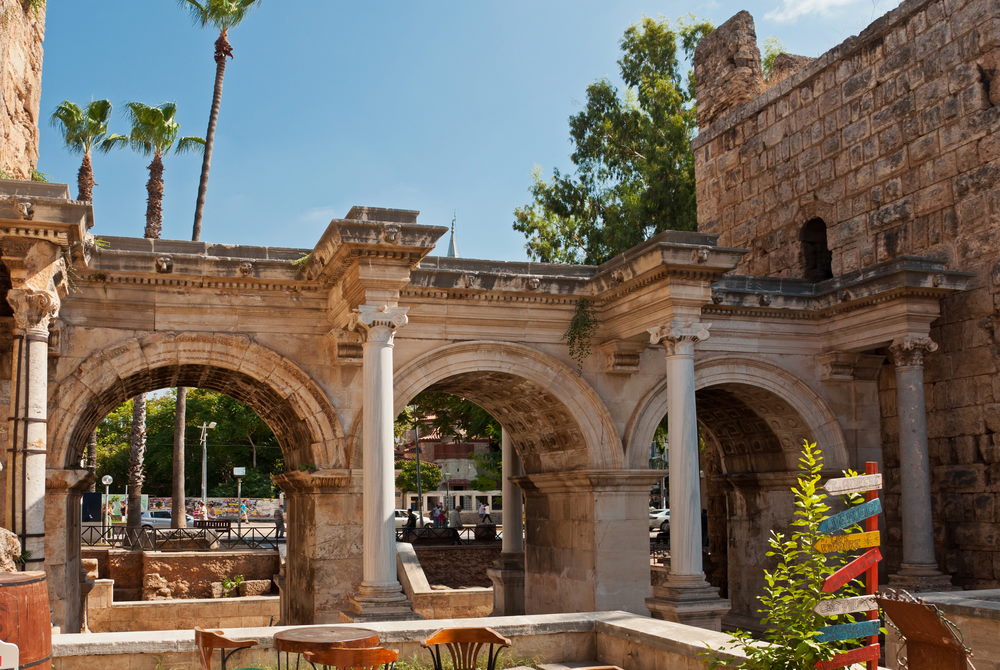 What Can I Do at Hadrian's Gate?

Another name of Hadrian's Gate is the "Marble Gate". It's the gateway to historical Kaleiçi, in the heart of Antalya's city center. You can have a very pleasant walk to the marina from here.

You can also see historical Kaleiçi houses and wander around souvenir shops. There are many cafes and restaurants overlooking the harbor on the city walls.

Read our detailed article and get more information about the history of the ancient city of Antalya.

Hadrian's Gate is the only remaining entrance gate on the walls surrounding the city and harbor.

Hadrian’s Gate consists of two facades, three entrance arches, has towers that stand on either side. All three arches are the same size (4.15 meters wide and 6.18 meters high). It's total height is about 8 meters.

The ceilings of this tri-arched triumphal passage are decorated with reliefs of flowers and fruits grown in Antalya. The gate has composite column heads adorned with acanthus leaves. Except for the columns, it's completely made of white marble.

Stylistically, they are similar with the columnheads in the Celsus Library in Ephesus, which were built around the same period.

The gate once had a second floor above the arch, but it is no longer standing today. On top of the gate once stood a statue of Emperor Hadrian.

Hadrian's Gate is the best example of city gates becoming monuments instead of defense elements, as it was built during a long period of peace (Pax Romana). 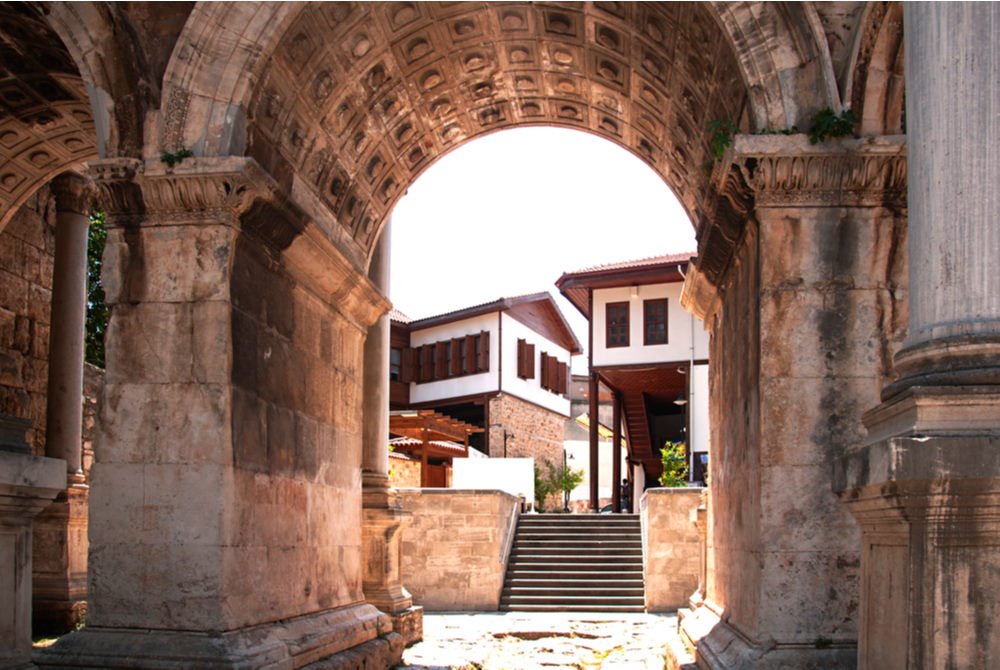 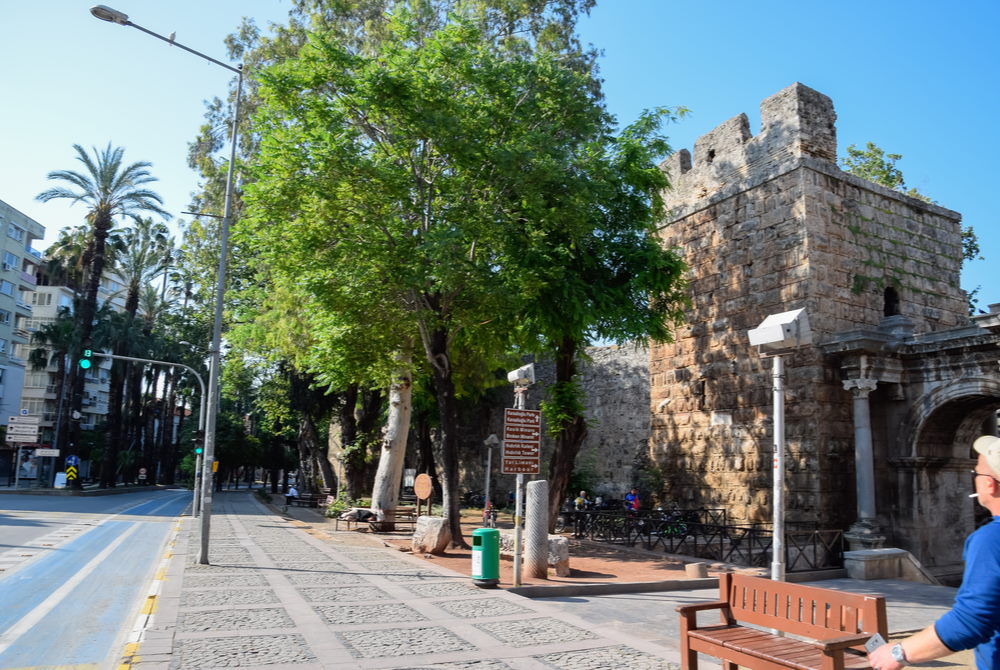 How to Get to Hadrian's Gate

Hadrian's Gate is located on Atatürk Boulevard, literally in the center of Antalya.

When is the best time to visit Hadrian's Gate?

Since the summer in Antalya is very hot, the best time to visit is during the spring, winter and autumn. You can visit Kaleiçi and Hadrian's Gate any time but the most enjoyable time is in the evening and night.

What can I see around Hadrian's Gate?

Hadrian's gate is the gateway to the historical Kaleiçi district. You can see historic Kaleiçi houses, Hıdırlık Tower, Yivli Minare, AKMED Kaleiçi Museum, and the Marina.

How can I get to Hadrian's Gate?

Hadrian's Gate is located on Atatürk Boulevard, literally in the center of Antalya. 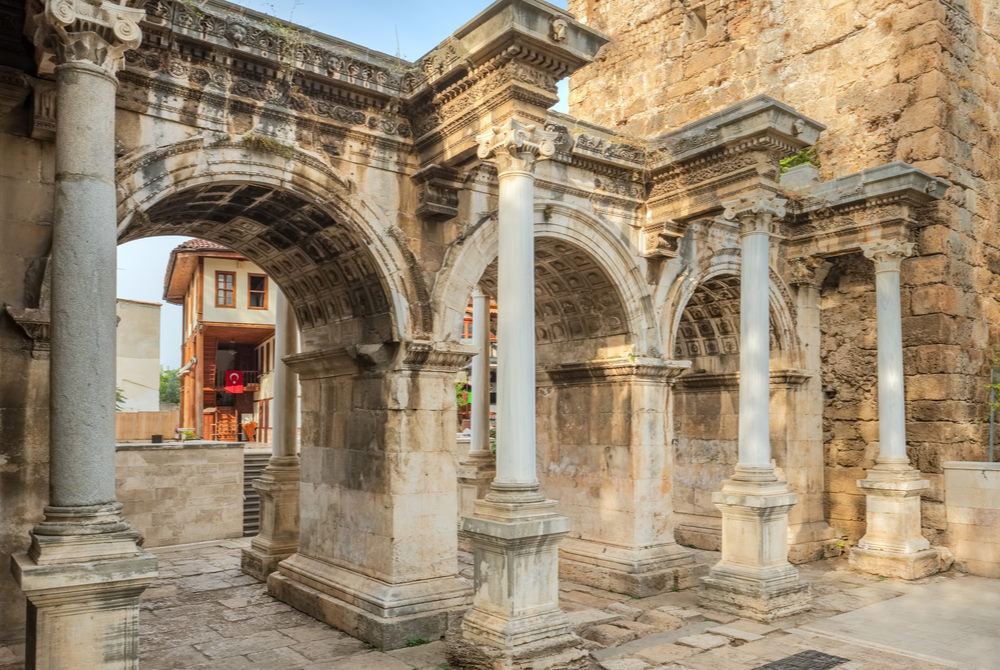 The History of Hadrian's Gate

Since Hadrian traveled to Asia Minor between 121 and 125 AD and between 128 and 132 AD, the exact dating of the gate is controversial.

It was first described by the Irish hydrographer Francis Beaufort in 1817.

The passageway, which was a part of the city walls, had not been used for many years and was well preserved. In the 1950's the city walls were demolished. Hadrian's Gate was restored in 1961-62 and reconstructed according to the original plan.

During the reconstruction, bronze letters were found on the gate, which were part of an inscription in Hadrian's honor. Since 2017, the letters have been donated to various museums and private collections around the world. Nine letters are in Vienna, two in Berlin, and some in England at the British Museum in London and at the Ashmola Museum in Oxford.

Learn more about monuments in Antalya in our guide to ancient ruins in Antalya.