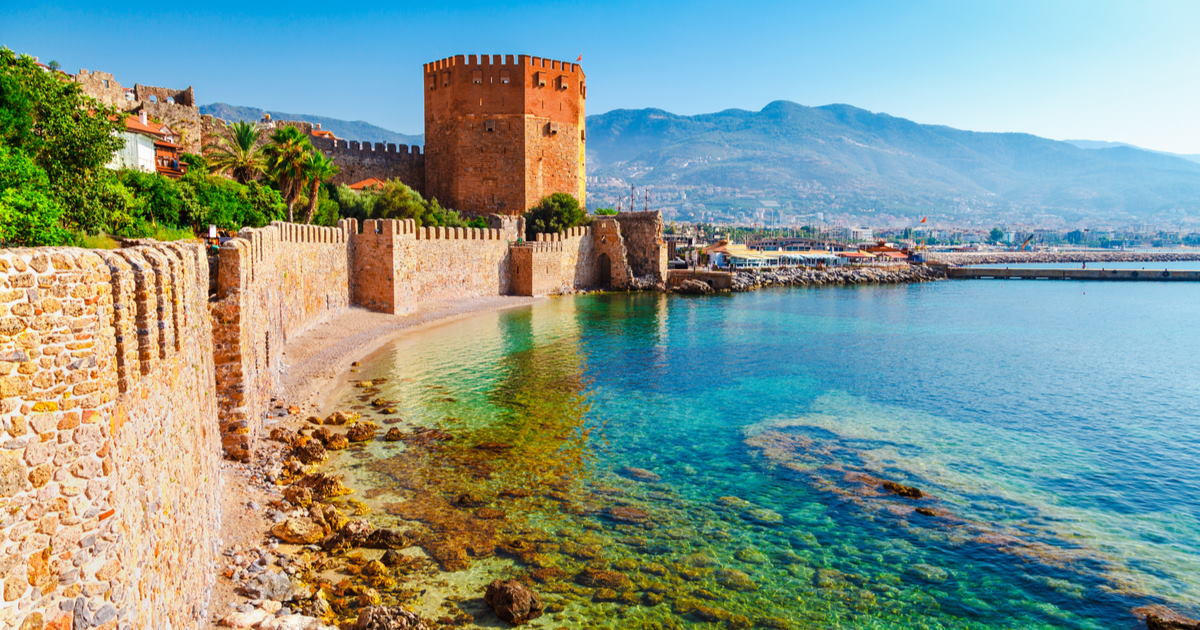 This Red Tower is the iconic symbol of Alanya, located in the historical city center. It was built to hinder attacks that might come from the sea. You may want to visit to see the amazing view of Antalya from the harbor.

In this article, you will find all the information you need to visit the Red Tower of Antalya including, what to see, how to get there, tips on tours, and tickets. Let's go! 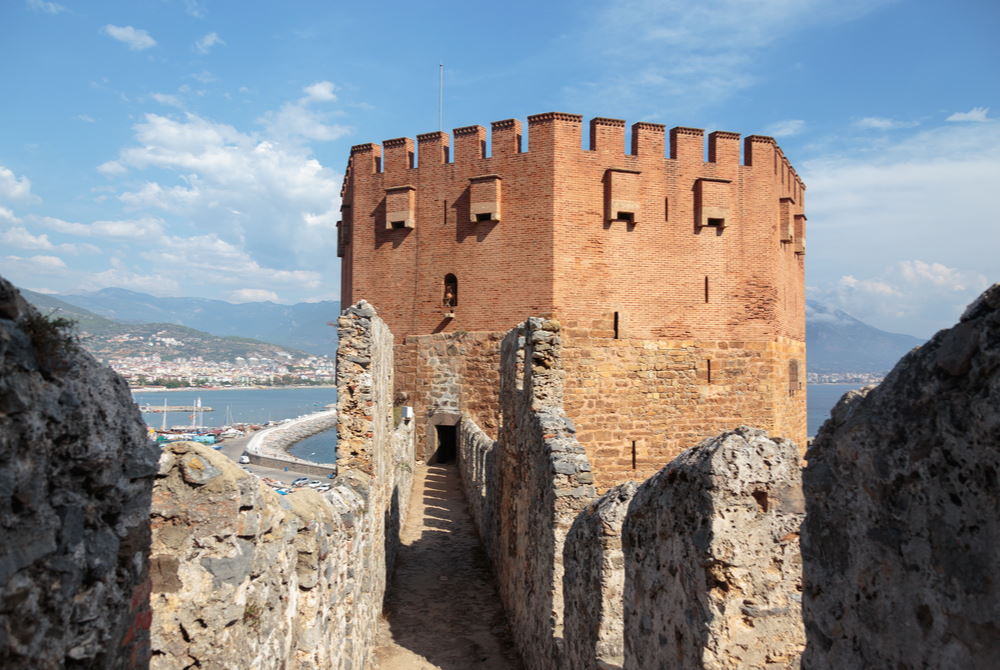 The Red Tower, which was built in 1226 to protect the city of Alaiyye and the castle, is located right next to the Turkish shipyard. The Seljuk Sultan Alaaddin Keykubat started the construction of Alaiyye Castle with this tower. The coast wall of the castle starts from the shipyard and ends at the Red Tower.

Kızıl Kule was built on bedrock on sloping land, overlooking the harbor. It's called "Red Tower" due to the stones and red bricks used in the structure.

The building is 33 meters high and 12.5 meters wide. The tower has an octagonal plan and contrary to its plain appearance, it has a very complex layout inside. The plan of each floor of the five-story building is different. You can look around through the loopholes as you go to the higher floors. Various exhibitions and events are organized in different floors in Kızıl Kule during certain periods.

The ground floor of the tower is used as a part of the Alanya Museum about ethnographic artifacts. Ottoman period clothes, handicraft samples, and benches where these were produced are exhibited in this museum.

A cistern can be seen in the middle of the tower. It is said that the tower was used as a cistern in the Ottoman Period.

When you look around from the top floor of the tower, you will see a view that encompasses the walls, towers, and harbor that surround the peninsula. 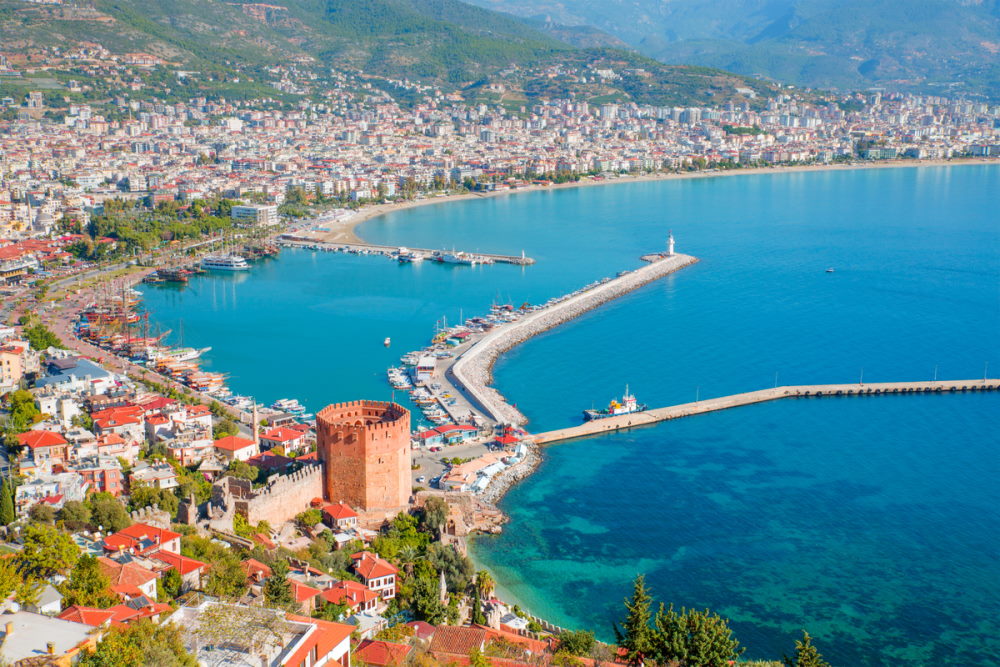 How to Get to Kızıl Kule

Kızıl Kule is very accessible from every part of Alanya. The easiest way to reach it by using the bus.

How much is the entry to Kızıl Kule (Red Tower)?

The ticket costs 12 TL per person for the Red Tower only. However, you can buy a combined ticket to see both the shipyard and Red Tower for 17 TL. If you have a Museum Card, you can visit the tower free of charge. 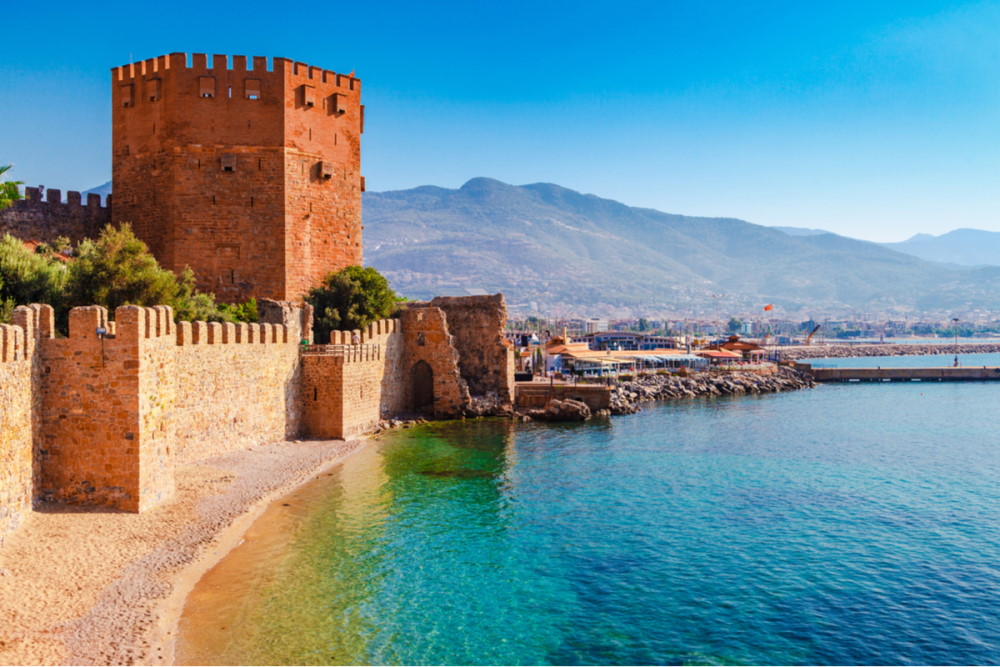 The History of Kızıl Kule

Kızıl Kule was built by the order of Seljuk Sultan, Alaeddin Keykubad, in 1226. As the Seljuk ruler loved Alanya very much, he spent the winter months in here. Thus, the city became the winter quarter of the capital. He also invited many masters and scholars to Alanya and built beautiful castles, palaces, and mansions in and around Alanya.

Red Tower has attracted attention of the travelers throughout history and has a place in many books. Evliya Çelebi, a 17th century traveler, states that Alanya Castle has a solid eight-cornered tower on the sea side, this tower held 2,000 men during a siege, and the second castle guard sitting here had 40 soldiers.

Learn more about monuments in Antalya on our page dedicated to ruins in Antalya.