Guide to the Ancient City of Olympos in Antalya: History & Tips

The province of Antalya offers many ancient sites to visit. One of the most popular is Olympos.

Olympos is an ancient city located in a valley on the southern coast of Turkey, 90 km southwest of Antalya, near the village of Çıralı.

In this article, you will find all the important information you need to know before visiting this famous ancient city.

1.
What Can I Do in Olympos?
2.
Entrance, Tickets, and Tours
3.
How to Get to Olympos
4.
Frequently Asked Questions
5.
The History of Olympos
6.
Contact 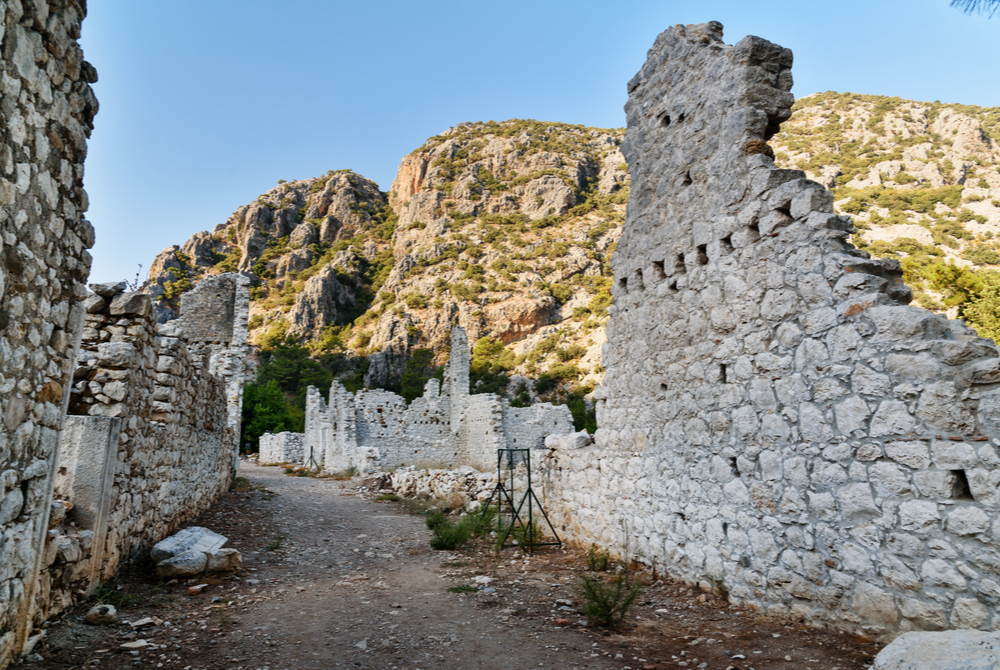 What Can I Do in Olympos?

First, you can visit the archaeological site of Olympos, including the temple gate, the Olympos theater, the Necropolis church, and the Acropolis hill.

You can also stay for one (or several) nights in Olympos. Accommodation in bungalow style, wooden houses in pine forests and orange groves have become very popular, especially with young people. It's a beautiful place for a nice getaway.

The road passing through these facilities leads to the gate of the ancient city. 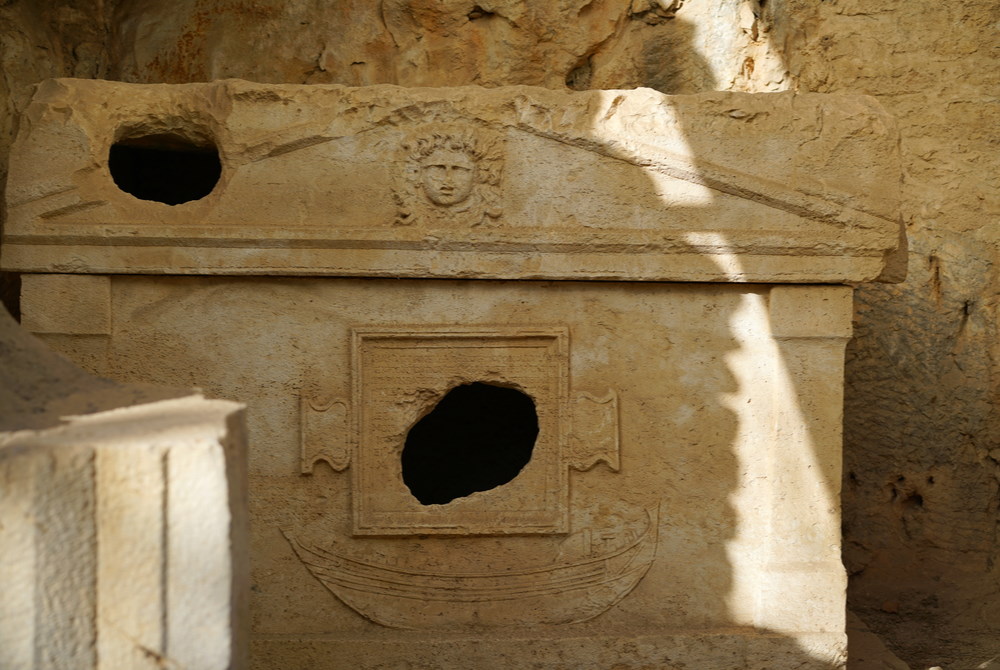 The Ancient City of Olympos

Olympos was one of the most important harbor cities during its heyday. If you start your visit of the city from the right, you will see a sarcophagus belonging to Captain Eudomos. There is an inscription dedicated to Eudomos on it that you shouldn't miss.

The ancient city was built on both sides of the Akçay stream and is very impressive. The city of Olympos was probably founded in the 3rd century BC. The ruins are located near the beach, at the mouth of a river.

It is necessary to pass through the water in order to see structures, such as the theater, the bathhouse, and the basilica. The ruins on the north bank of the river are buried under thick vegetation and are more difficult to reach.

Near a pond stands the propylaeum of a temple bearing a dedicatory inscription in the name of Marcus Aurelius.

Around the site, it is possible to do some trekking, canyoning, climbing, and various sea sports.

The area is on the Lycian Way and offers some very nice trekking routes. This place is also one of the breeding areas of the world famous caretta carettas turtles in our country.

Located in the middle of the nature reserve, the pebble beach impresses with beautiful vegetation, ancient ruins, and a unique atmosphere.

This fact makes Olympos Beach very interesting especially for nature lovers. Bathing in beautiful clear sea water in the middle of a nature reserve and enjoying the peaceful seclusion by day is an extraordinary experience.

Did you know that the most popular attraction around is actually the cable car that goes up and down the hill?

A ride on the cable car is a spectacular experience at a lofty height. If you try it, you can to look forward to sensational panoramic views, as well as exciting activities on the 2,364-meter Mount Olympos.

About 8 km from Olympos, is the ancient volcano of Chimaera, where gases escaping from fissures in the rocks produce an ever burning flame. Chimera was a mythological animal with the head of a lion, the body of a goat, and the tail of a snake. This place is called Yanartaş or burning rock in Turkish. 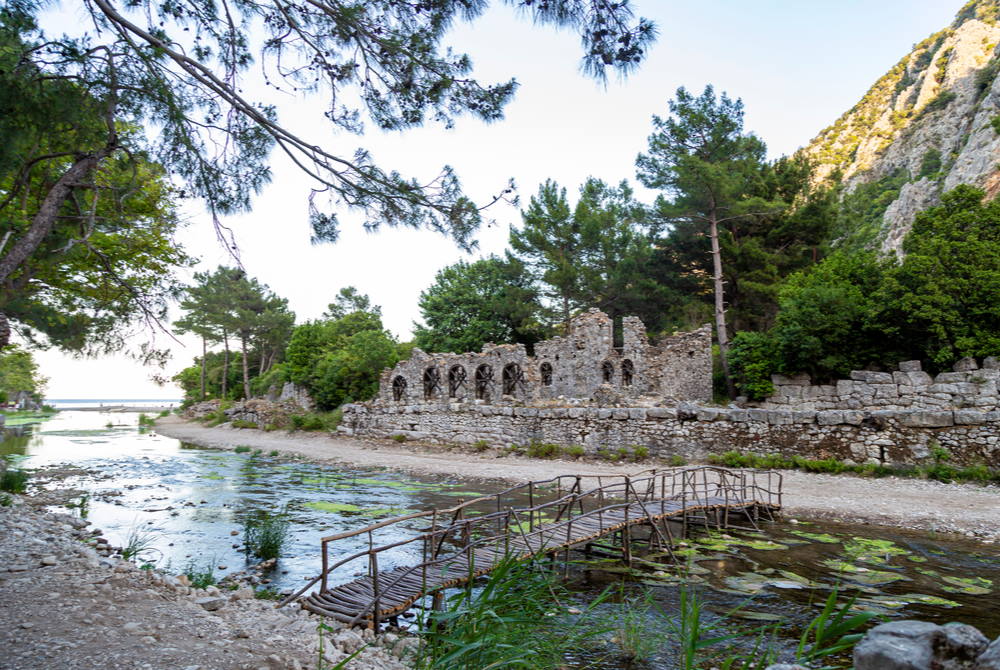 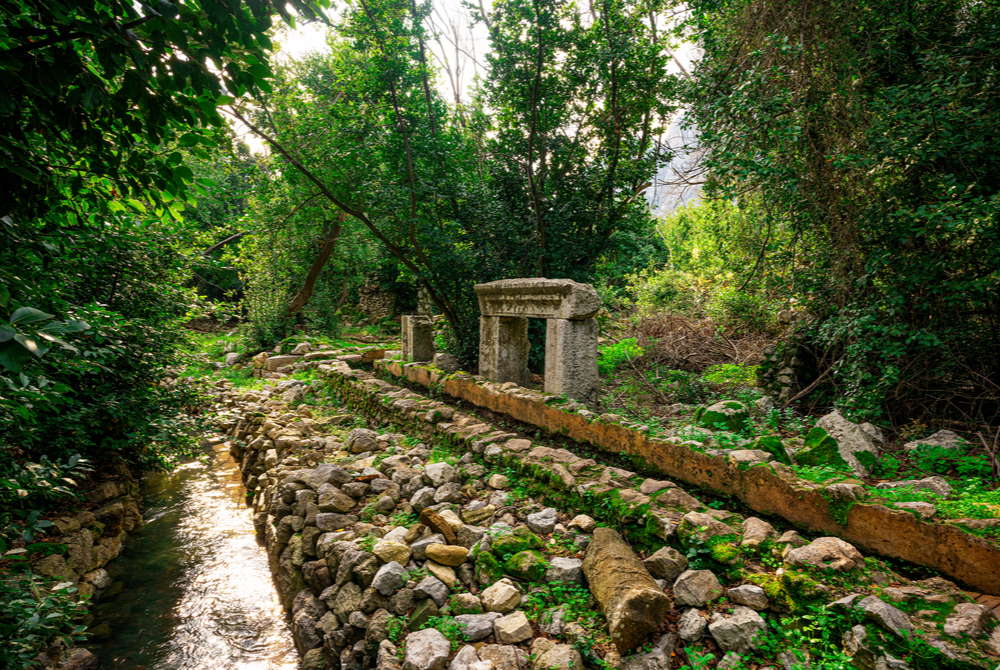 How to Get to Olympos

The ancient city of Olympos is located in Antalya in the Mediterranean region. It's 28 kms away from Antalya's city center. The ancient ruins are in the Olympos-Bey Mountains National Park.

The main entrance to the ancient city of Olympos is on the Adrasan road. It's possible to reach the entrance by vehicle. If you want to travel at your own pace, you should rent a car in Antalya.

Directions for private vehicles: On the Kemer-Kumluca highway, turn left at the Çavuşköy exit approximately 50 meters after the Çıralı exit. You will see the Olympos sign after about 11 km.

Bus: Kumluca-Fethiye minibuses and buses departing from the Antalya bus station stop at the Olympos station. 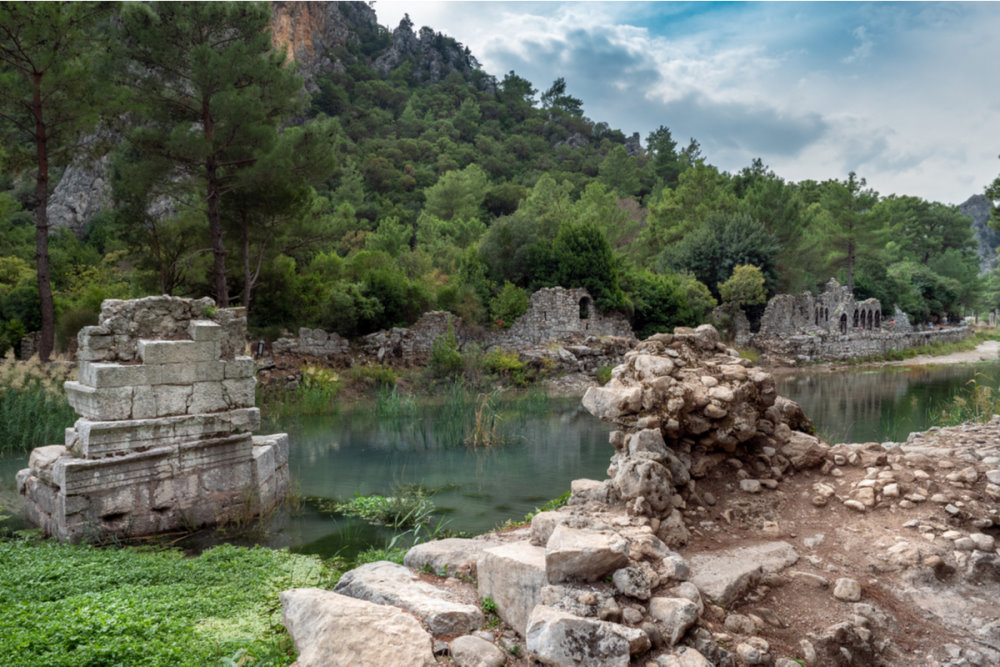 How much is a ticket to see the ancient city of Olympos?

Entrance to the ancient city of Olympos cost 30 TL in 2021. If you have a Museum Card, there is no cost for entry.

Olympos is an ancient city located in a valley on the southern coast of Turkey, 90 km southwest of Antalya near the village of Çıralı.

How can I get to Olympos?

Directions for private vehicles: On the Kemer-Kumluca highway, turn left at the Çavuşköy exit approximately 50 meters after the Çıralı exit. You will see the Olympos sign after about 11 km.

Bus: Kumluca-Fethiye minibuses and buses departing from the Antalya bus station stop at the Olympos station. 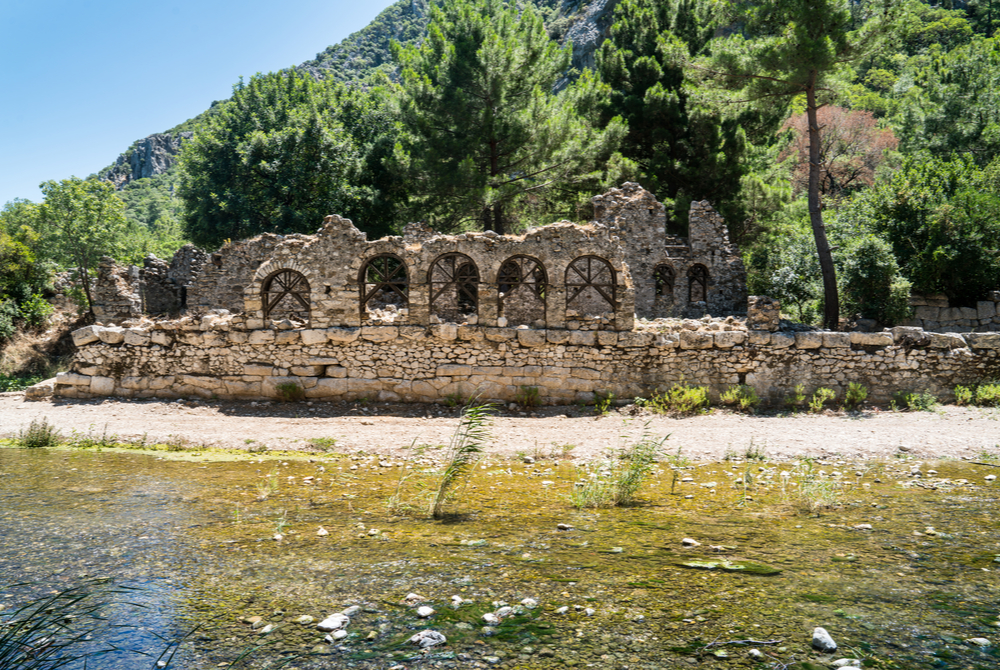 The History of Olympos

According to the ancient historian Strabon, Olympos was one of the largest settlements in the Lycian region. Another ancient historian, Cicero, described Olympos as a city full of wealth and art.

It is believed that the first settlement foundation remains bear traces of the Hellenistic period from 300 BC. In the ancient city, Hellenistic wall remains can still be seen. Olympos was ruled by pirates for a while and then was saved by the Roman commander, Isauricus.

Olympos had an important place in the Lycian League as one of the 6 cities with three voting rights.

In the Middle Ages, the maritime republics of Venice, Genoa, and Rhodes built two fortresses on the coast, but by the 15th century the city had become uninhabited. Today the site attracts tourists, not only for the ruins of the city that can still be admired, but for the beautiful panorama full of lush vegetation.