Guide to the Ancient City of Patara in Antalya: History and Tips 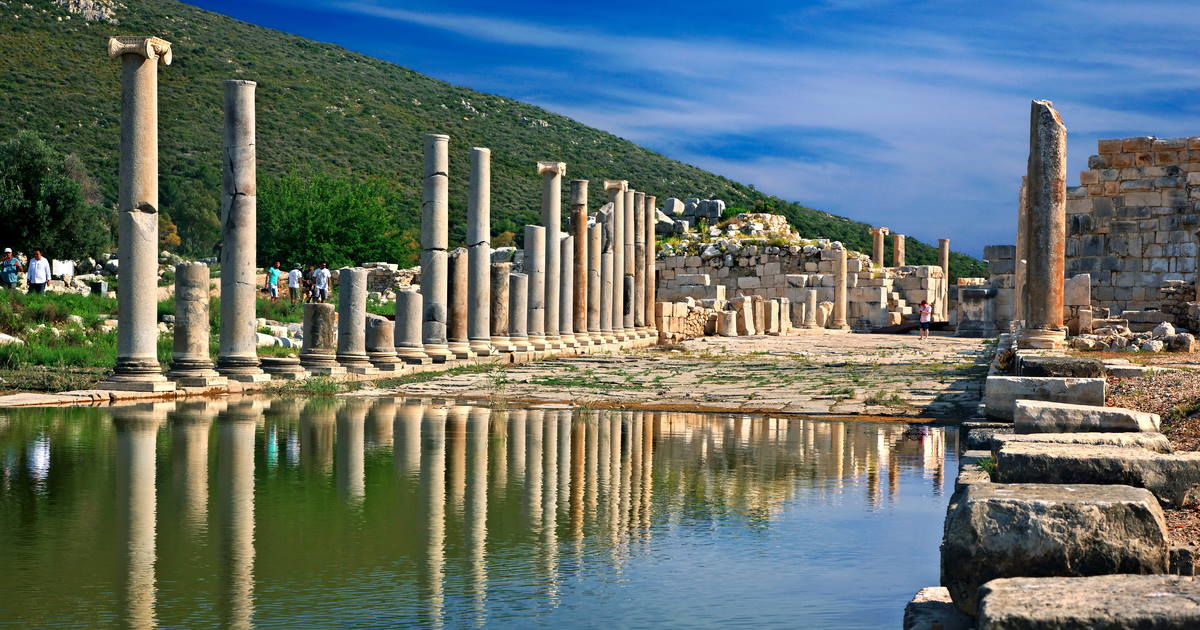 Patara is an ancient city located on the west coast of Lycia, today the town of Kalkan in Antalya. It was once a leading city in the Lycian League along with Xanthos and Letoon.

In this article, you will find all the useful information to know before visiting Patara, including how to get there, what to do there, how to access the city, and tours available on site. 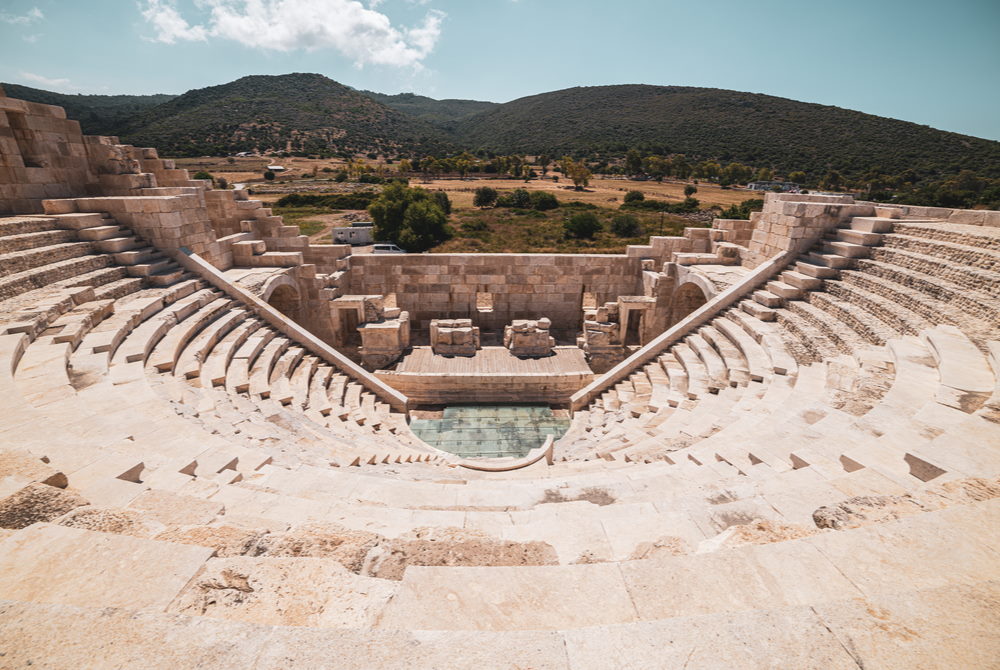 What Can I Do in the Ancient City of Patara?

Patara, apart from being an interesting ancient city is also famous for the marvelous Patara Beach and the spawning grounds of caretta caretta turtles. Patara beach is a place where many people flock to in the summer season. It's protected by the Natural Life Conservation Foundation because it's one of the rare places where these turtles lay their eggs.

Some of the important structures you will see in the ancient city of Patara are the Roman Triumphal Arch, temples, a necropolis area, a lighthouse, bouleuterion (parliament building), the city gate, a theater building, churches, baths (Nero Bath, Vespasian Bath), the granarium (granary), and warehouses.

In fact, the ruins of the city of Patara start before even arriving in Gelemiş village. Lycian type sarcophagi and Roman Period sarcophagi in the city's necropolis can be seen before you arrive at the site.

There is a magnificent Triumphal Arch that can be seen from the roadside, 2 km after Gelemiş village, which was built in the late 1st century AD. The theater on the slope of the hill was built during the reign of Emperor Antoninus Pius. There is also a Temple of Athena on the hill.

Patara's Lighthouse is believed to be the oldest lighthouse in the world and was built in 60 AD. 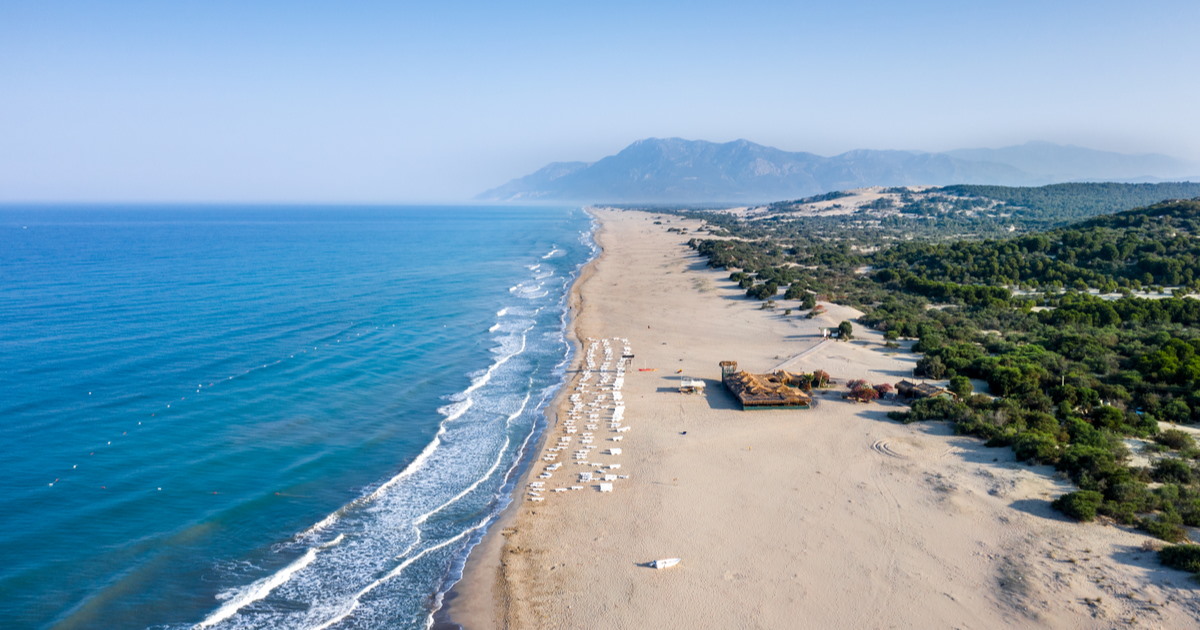 It is believed that Saint Nicholas was born in Patara around 280 AD. During Nicholas’ lifetime, the harbor filled with silt and the city gradually lost importance. St. Nicholas lived most of his life in the nearby town of Myra (Demre).

The Apostle Paul anchored in the port of Patara on his third tour coming from Rhodes, along with the Evangelist Luke and other fellow travelers.

Birthplace of Apollo and Artemis

Patara was the birthplace of Apollo and Artemis, according to Greek mythology. Apollo and Artemis are the twin children of Zeus and his forbidden lover Leto. According to legend, Leto managed to escape from Hera and came to Patara, but no one helped her relieve her pains while giving birth, as they were afraid of the wrath of Hera. She wraps palm trees in her arms and is able to relieve her pain. First she gives birth to her daughter Artemis and then Apollo after being in pain for nine days.

It is believed that there was a Temple of Apollo, as the prophecy center in Patara.  A large bust of Apollo was discovered on the hill next to the city, indicating the existence of a Temple of Apollo. Although, it has not yet been precisely located.

Homer mentions Apollo as Pholbos meaning illuminated and the famous archer of Lycia. Apollo and his sister Artemis are also known for helping the Anatolian city of Troy. 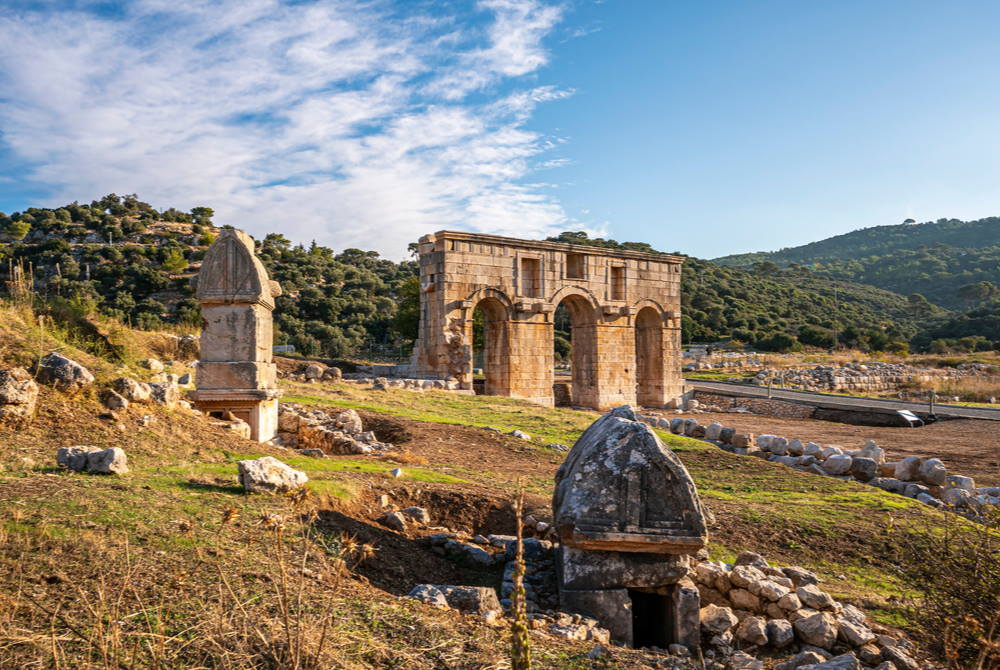 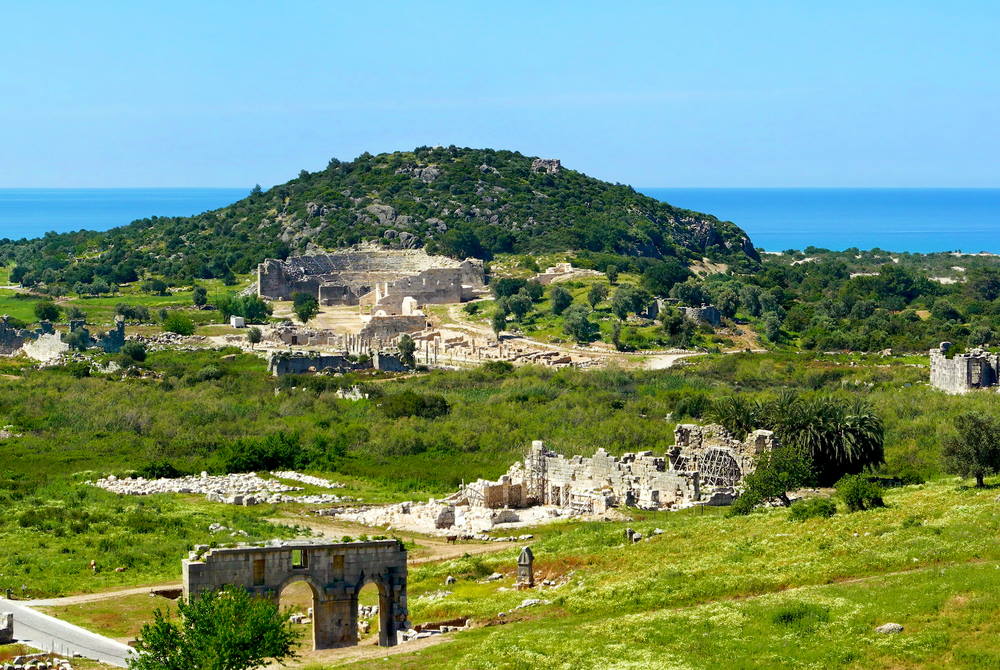 How to Get to Patara

The Patara ruins are located about 1.5 km south of Gelemiş village in Kalkan. It is possible to get Patara by private car, bus, minibus, or taxi. 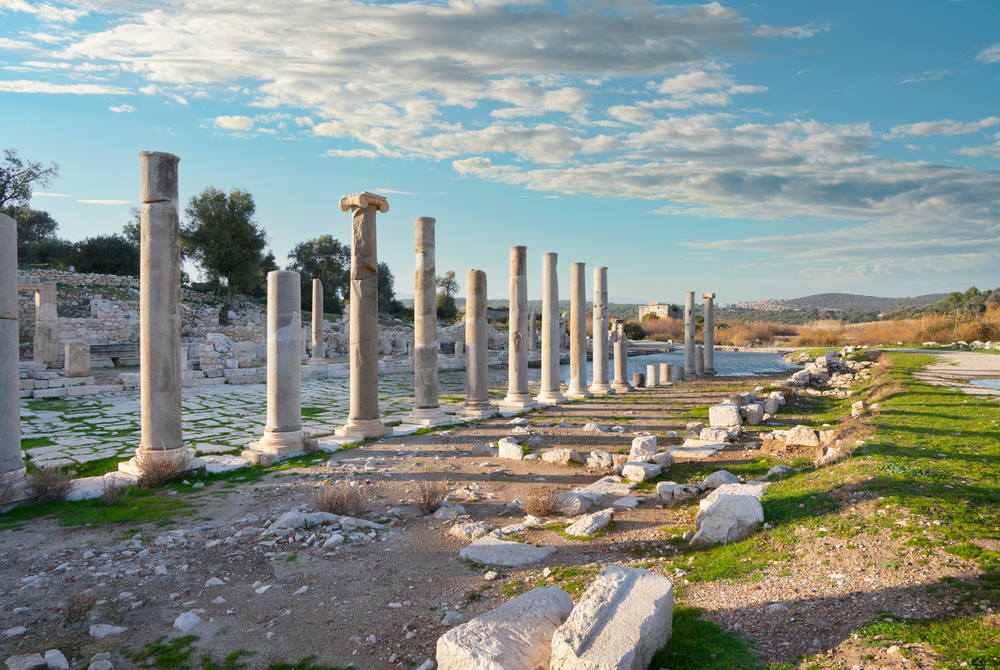 What can I see in the ancient city of Patara?

Some of the important structures you can see in the ancient city of Patara are the Roman Triumphal Arch, temples, a necropolis area, a lighthouse, bouleuterion (parliament building), the city gate, a theater building, churches, baths (Nero Bath, Vespasian Bath), the granarium (granary), and warehouses.

Where is the ancient city of Patara?

Patara is located in Gelemiş village, between Kaş and Fethiye, Turkey.

How much is the entrance to Patara?

The entrance fee for Patara is 30 TL per person in 2021. Museum Card holders can visit the site for free.

How can I get to the ancient city of Patara?

The Patara ruins are located about 1.5 km south of Gelemiş village in Kalkan. It is possible to get Patara by private car, bus, minibus, or taxi.

By minibus: You can take Patara minibuses departing from Kas, Kalkan, and Fethiye.

By bus: You can take the  Fethiye - Kaş bus and get off in Ovaköy. From there, you can reach the region by walking approximately 3.5 kilometers or taking a taxi.

By Car: On the way from Fethiye to Kalkan, you turn to onto Gelemiş road before passing Kalkan, from here a 5 km long road will take you to the ancient city of Patara. There are no large Hotel complexes and resorts in the area as the Patara region is a protected area. You will find family run hotels and more modest accommodations for every budget. Here are four hotels near Patara. 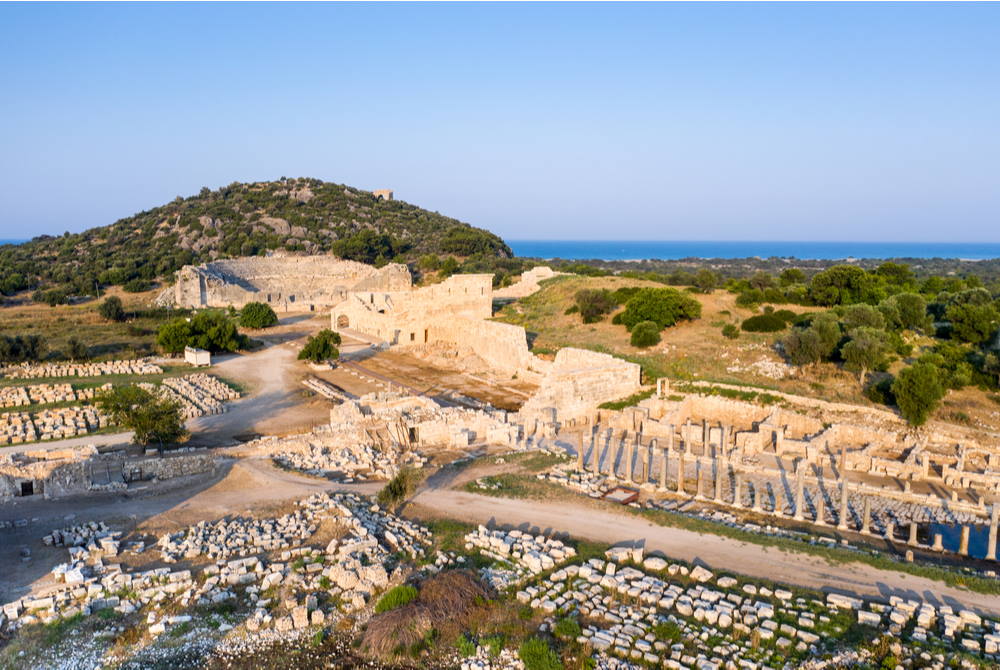 The History of Patara

Patara became famous in antiquity as an oracle center of Apollo. It was conquered by Alexander the Great in 333 BC. After his death, it was occupied by Antigone I until it was passed onto the domain of the Ptolemies of Egypt, who enlarged it and gave it the name Arsinoé, which was the name of the wife of Ptolemy II Philadelphus. Then, it was conquered by Rome.

It was Christianized at the beginning of Christianity, and several bishops of early Christianity were born in Patara. During the Byzantine Empire, it remained an important center for trade and pilgrimage.

At the end of the 18th century, travelers rediscovered Lycia, including the ruins of Patara. Marie Gabriel Florent Auguste de Choiseul Gouffier was the first Western scholar to have visited the site. Then Charles Texier came to Patara in 1836 and described the theater, the Stadttor gate of Mettius Modestus, the "Corinthian temple", and the tombs.

Systematic excavations began in 1988 under the direction of Fahri Işık. Since 2009 Havva İşkan from Akdeniz University in Antalya has been responsible for the excavations. In 2013, the 25th anniversary of the excavations was celebrated.

Get more information about other important historical monuments in Antalya on our dedicated page.