Guide to the Ancient City of Phaselis in Antalya: History & Tips 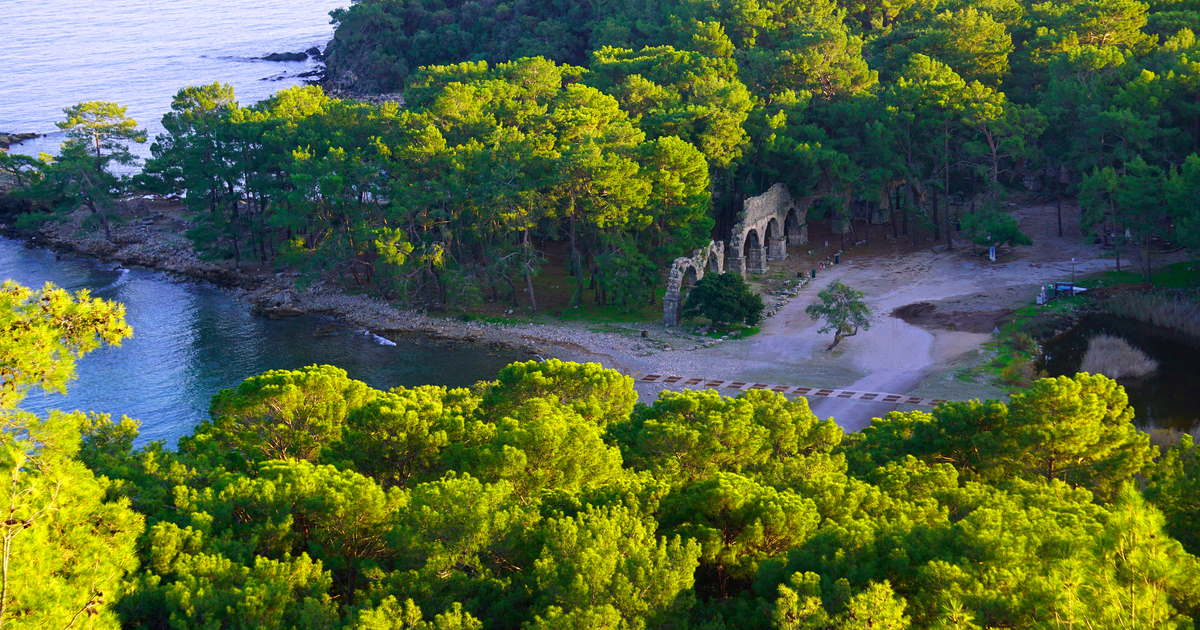 Phaselis is not only a historically rich place to visit, it's also a beautiful national park to enjoy on a sunny day. Indeed, in the Tekirova district of Antalya, the ancient city of Phaselis is a true natural beauty, where historical ruins are waiting for you to discover under the shade of pine trees.

Phaselis was one of the most important cities of the Lycian League. The Roman ruins are well preserved and the three harbors of the ancient city are used as beaches today.

In this article, you will find all the important information you need to know before visiting these important 2600-year-old remains.

1.
What Can I Do in Phaselis?
2.
Entrance, Tickets, and Tours
3.
How to Get to Phaselis
4.
Frequently Asked Questions
5.
The History of Phaselis
6.
Contact 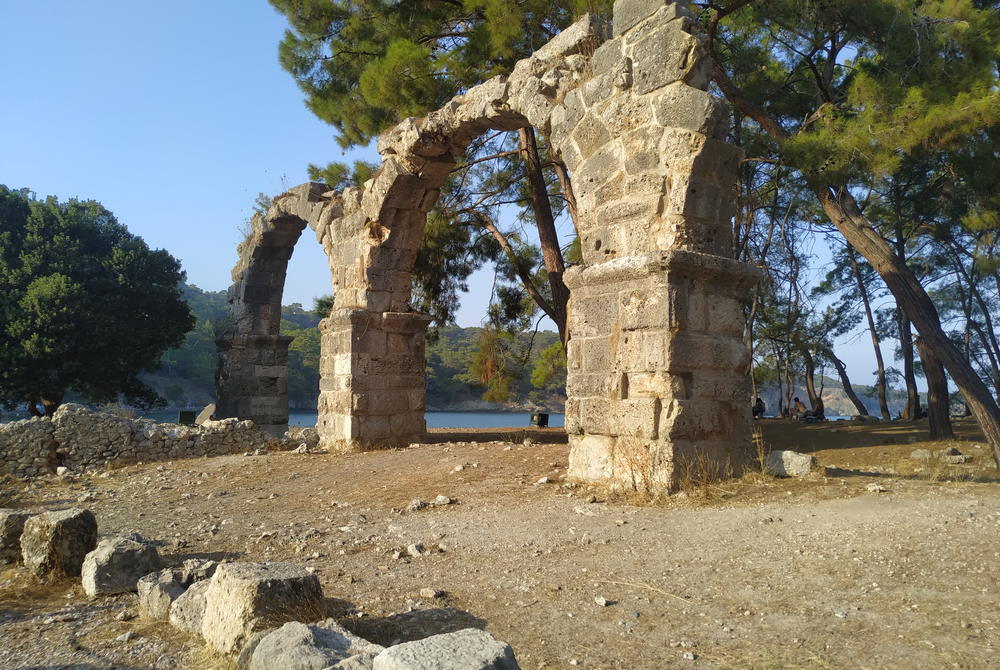 What Can I Do in Phaselis?

Phaselis is one of the most popular day trip destinations in the area with a natural bay and historical ruins.

The word Phaselis means "the place protected by Gods" in Ancient Greek. Most of the ruins in Phaselis date back to the Roman and Byzantine periods. 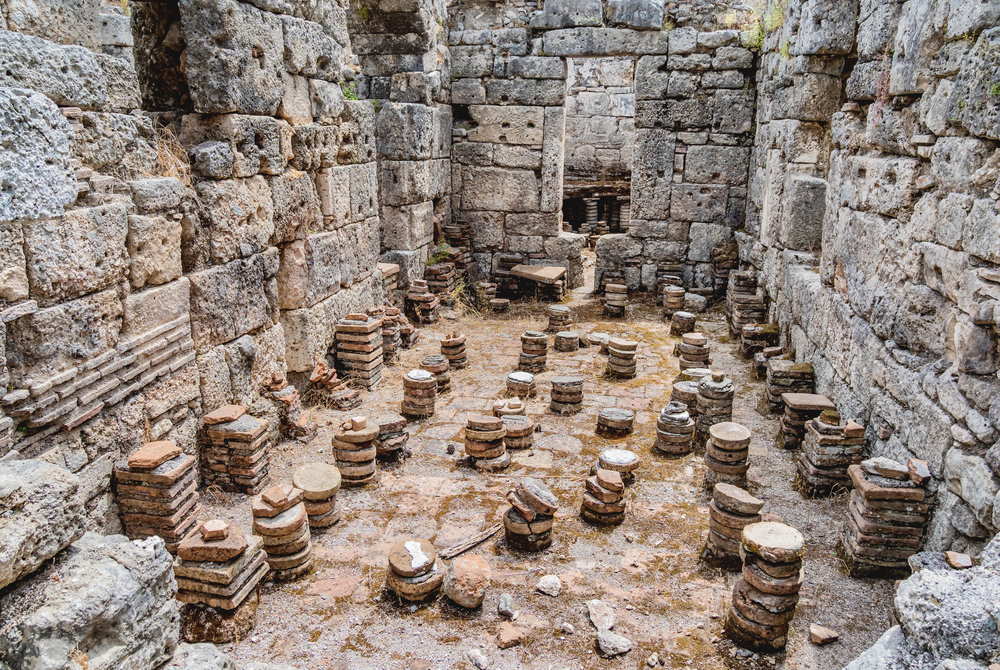 The Ancient City of Phaselis

Here are some of the different parts of the ancient city you will see.

Protection Walls: The walls surround the city from the sea to protect it from pirate attacks.

Aqueducts: The length of the aqueduct is about 450 m. The Aqueducts are the oldest structures that have survived until today in Phaselis.

Roman Baths: There are of two Roman bath complexes in Phaselis, one small and the other large. Both complexes date back to 3rd century and used the hypocaust system.

Latrina: The Latrina is located to the north of the small bath and dates back to the 3rd century. Its floor is covered with mosaics.

Theater: The small theater is characteristic of a typical Hellenistic Period theater. From the remains its possible to tell that the stage building was added during the Roman period. The Hellenistic theater dates back to 2nd century, although there is a large possibility that there was a theater here before this. It has the capacity to hold about 1,500 spectators.

Basilica: Opposite the theater, you can see the remains of a small basilica that dates back to the Byzantine period. It's controversial whether the basilica here was a congregation or an episcopal church.

Acropolis: The main goddess of the city was Athena, the Goddess of War and Wisdom. The Temple of Athena and some other important structures, that have not been found yet, are thought to be located on the acropolis hill today. 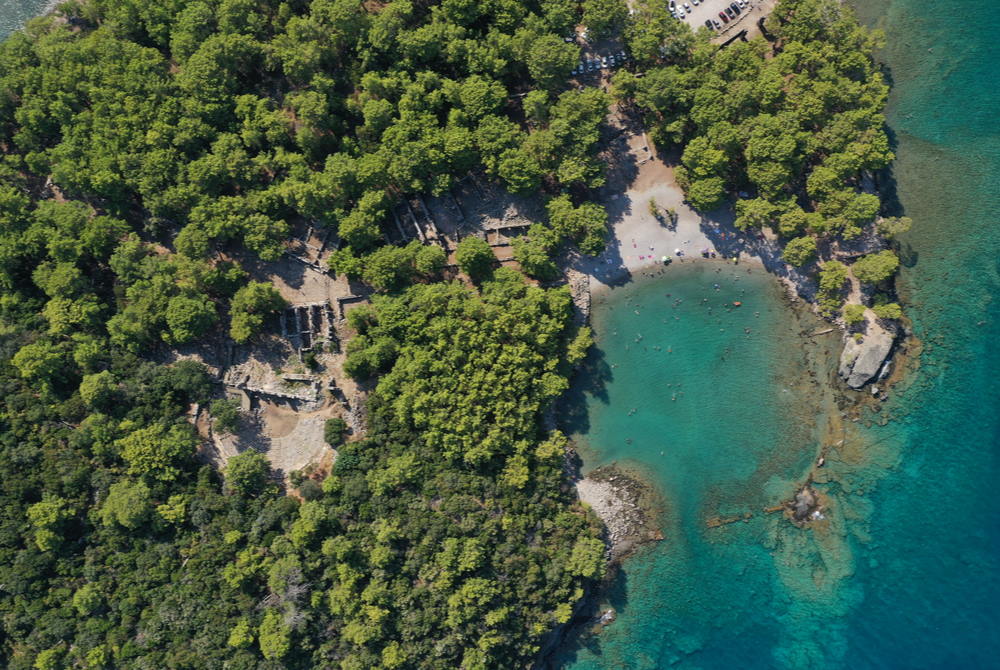 Phaselis Beach is a great option for families with kids because it has shallow, warm water. There are 3 different bays: the North Bay, the Ancient Bay, and the South Bay. The geographer, Strabon, mentioned these harbors. The three beaches here were used as a ports in ancient times.

If you dive, you can see the remains under the water. Make sure to bring a snorkel and mask when packing for Phaselis. 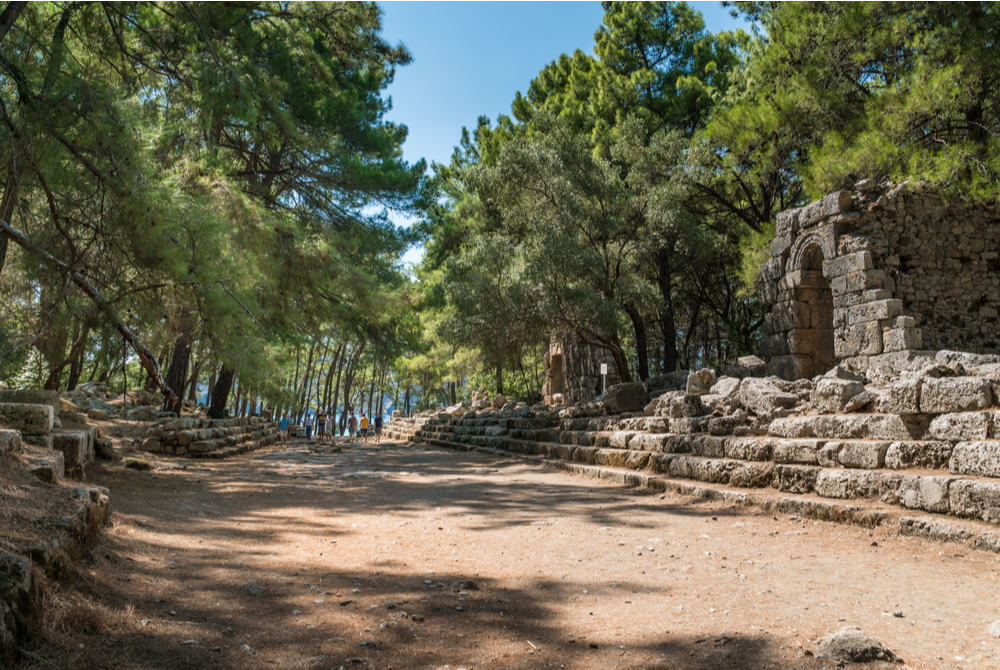 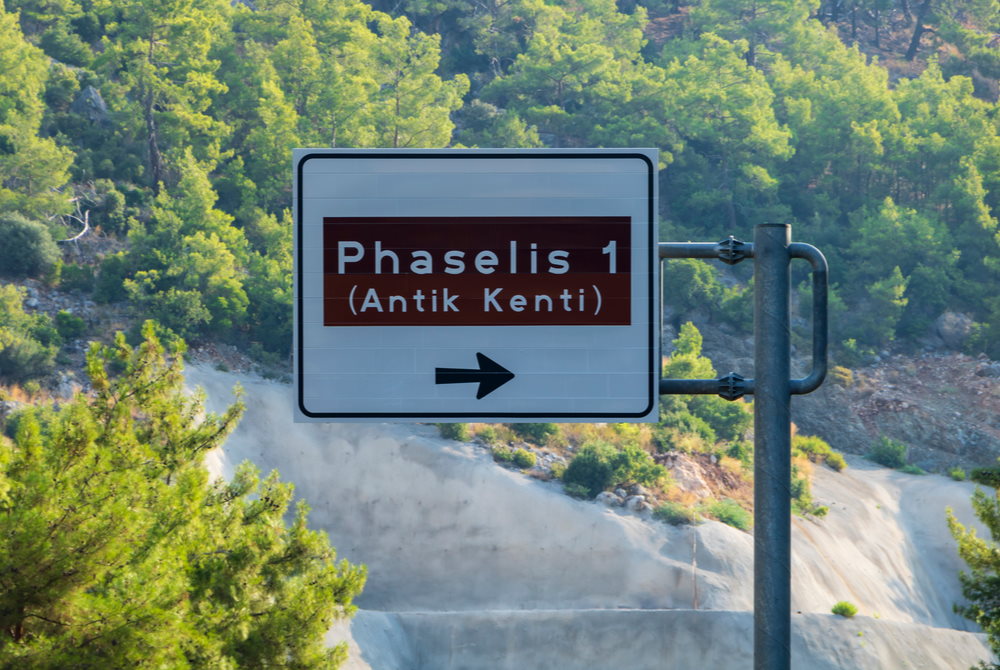 How to Get to Phaselis from Antalya or Kemer

The ancient city of Phaselis is located within the administrative borders of Tekirova in the Kemer District. It's 59 km from Antalya, 29 km from Olympos, and 15 km from Kemer.

You can get to Phaselis from Antalya, Kemer, or the airport.

Busses depart every half-hour and take approximately 30 minutes to get to Phaselis. When you get off at the Phaselis turnout, you have to walk about 1 km to the port.

A parking lot is available in Phaselis for those traveling with private or rental cars.

From the Antalya Airport, you can get to the bus station with the tram, municipal bus, or HAVAŞ shuttles to Kemer. From Kemer square, you can take the minibus that goes to Phaselis.

Check other things to do in Kemer. 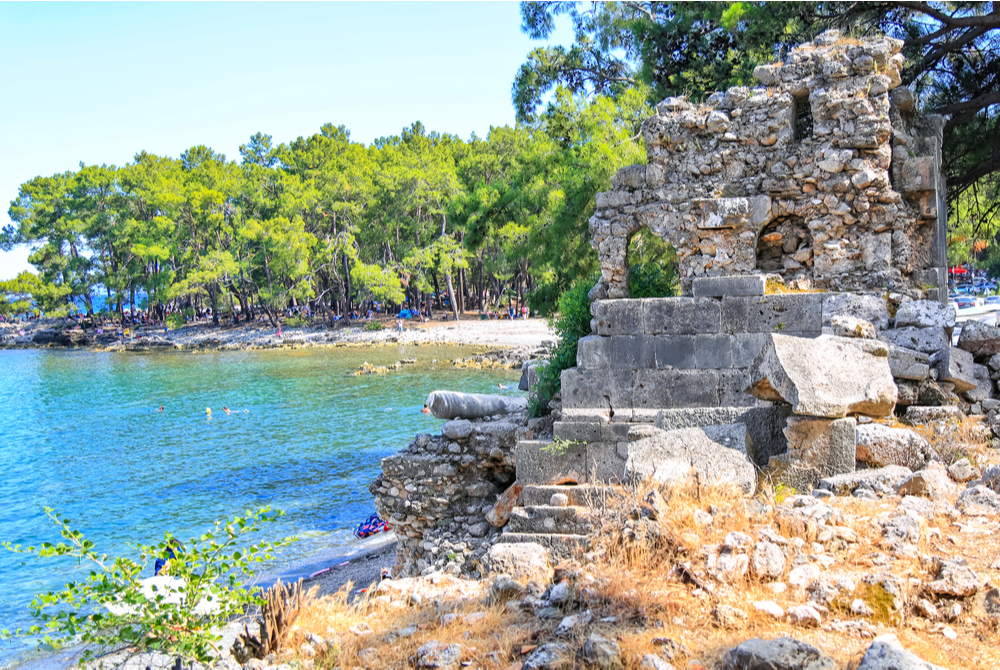 Phaselis is located within the borders of Tekirova Town in Kemer, Antalya.

How can I get to Phaselis?

Minibuses from Antalya and Kemer will take you to Tekirova.

If you are close to the 5M Migros in Antalya, you can find direct minibuses that go to Tekirova.

If you are not close to the 5M Migros in Antalya, can take any of the minibuses that go to Kemer.

The minibus for Phaselis departs opposite the Clock Tower in Kemer.

Busses depart every half-hour and take approximately 30 minutes to get to Phaselis. When you get off at the Phaselis turnout, you have to walk about 1 km to the port.

How can I get ticket for Phaselis?

It's possible to buy your ticket on site.

How far is Phaselis from Antalya? 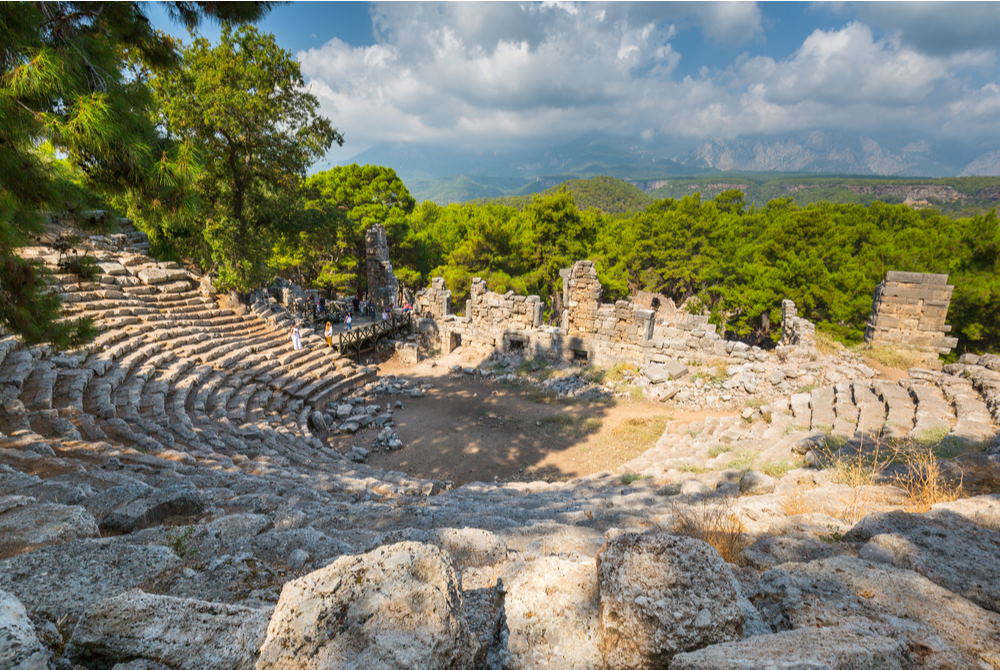 Phaselis was first founded by a colony from Rhodes in the 7th century BC. Its commercial port was the most important one on the east coast of Lycia for a long time. The city was dominated by Persians in the 5th century BC and then ruled by the Karian governor, Mausolos, in the 4th century. The people of Phaselis welcomed Alexander the Great with a golden crown in 333 BC.

The administration of the Rhodians continued until 167 BC except for short-term governance by the Persians and Alexander the Great. Phaselis became a member of the Lycian League in 167 BC and minted coins for the union.

The city was under constant threat from pirates. Finally, Roman commanders ended the rule of pirates in 43 BC. Brutus added the city to Rome. The city was reconstructed and a new era of wealth and peace began with Roman rule.

Phaselis became an episcopal center during the Byzantine period, but the city began to loose its importance in the 3rd century. After that, Phaselis gradually lost importance as a trade center because of the constant threat from pirates.

The city was conquered by the Seljuks in 1158. The harbors in Antalya and Alanya prospered and became more attractive and this weakened Phaselis. By the 13th century, the city was completely abandoned.