Guide to the Ancient City of Syedra in Antalya, Turkey: History & Tips

The region of Antalya is a treasure when it comes to ancient cities. Close to the Antalya city center, you can find wonderful sites like Perge, Xanthos, Termessos, and other Antalya sites. Close to Alanya, you will find another beautiful and interesting site: Syedra.

Syedra is one of the ancient cities worth seeing around Alanya. It's located in the village of Seki. At this site, you will see the remains of a typical ancient Roman settlement.

In this article, you will find all the important information you need to know before visiting the ancient city of Syedra in Alanya, including location, history, access, and tips.

1.
What Can I Do in Syedra?
2.
Entrance, Tickets, and Tours
3.
How to Get to Syedra
4.
Frequently Asked Questions
5.
The History of Syedra
6.
Contact 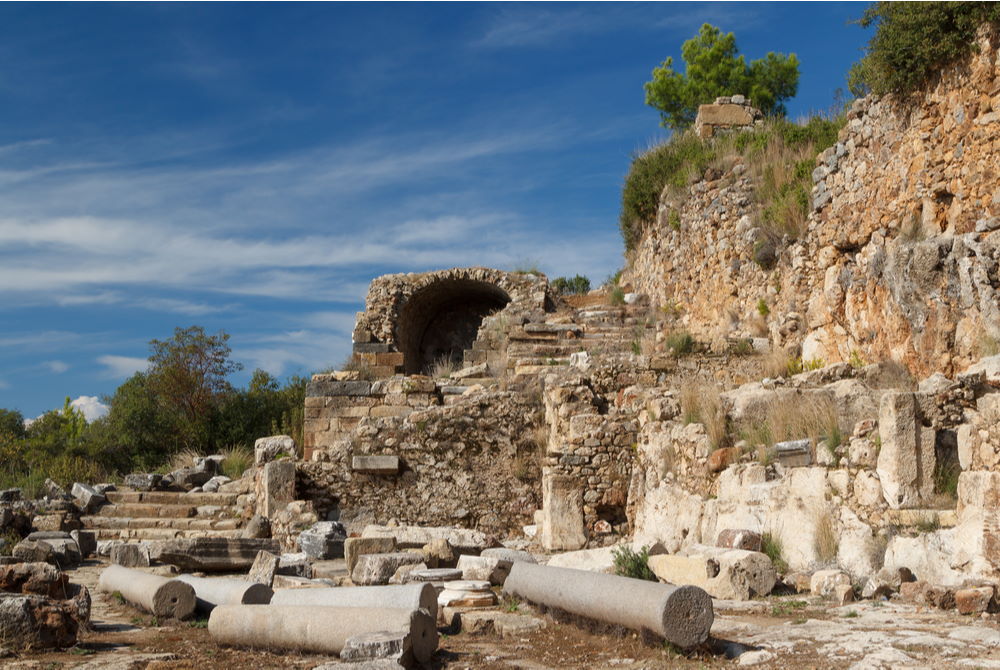 What Can I Do in Syedra?

The ruins of Syedra lie on a high hilltop overlooking the coast. Wearing pants and sneakers while visiting the ancient site is recommended because is a little bit difficult to walk due to frequent shrubs.

Syedra was a typical Roman settlement with many ruins that survived until today. Among them, there are quite large rows of plastered cisterns fed by a natural water source, a baptismal cave, a magnificent bath with mosaic flooring remains, a gymnasium, a colonnaded street and shops, a temple, a theater, churches, administrative buildings, an acropolis, and necropolis.

The monumental gate at the entrance of the city is still standing. It is possible to see the ruins of the fortification walls surrounding the city.

The basilica structure is the first large structure you will encounter. Just below the basilica, you will see a large warehouse that was used as a cistern. There is a 250-meter-long colonnaded street and many remarkable structures around it. It was once the social center of the city and a meeting point for the citizens.

The stoas here were covered with roofs to protect people from the sun and rain. On the east side of the city, a bath structure is standing. There are some mosaic flooring remains. The imperial necropolis is located to the southwest of the city.

The view becomes more beautiful as you climb up the hill. When you look towards the sea from the top of the acropolis, you can see banana gardens and Alanya Castle.

The Roman Emperor Septimus Severus wrote a letter to thank the city, because it did not participate in the rebellion against the Roman Empire and took a stand on the side of the empire. This letter, written on a marble block, was displayed on the colonnaded street in the ancient city. Today, this letter is exhibited in the Alanya Archaeology Museum. Also in the Antalya Archaeology Museum, Roman period mosaics retained from the ancient city of Syedra are displayed. They are located on the floor of the hall where the bronze statue of Hercules is exhibited. The subject of these mosaics is the scene of mythological nymphs kidnapping Hylas. 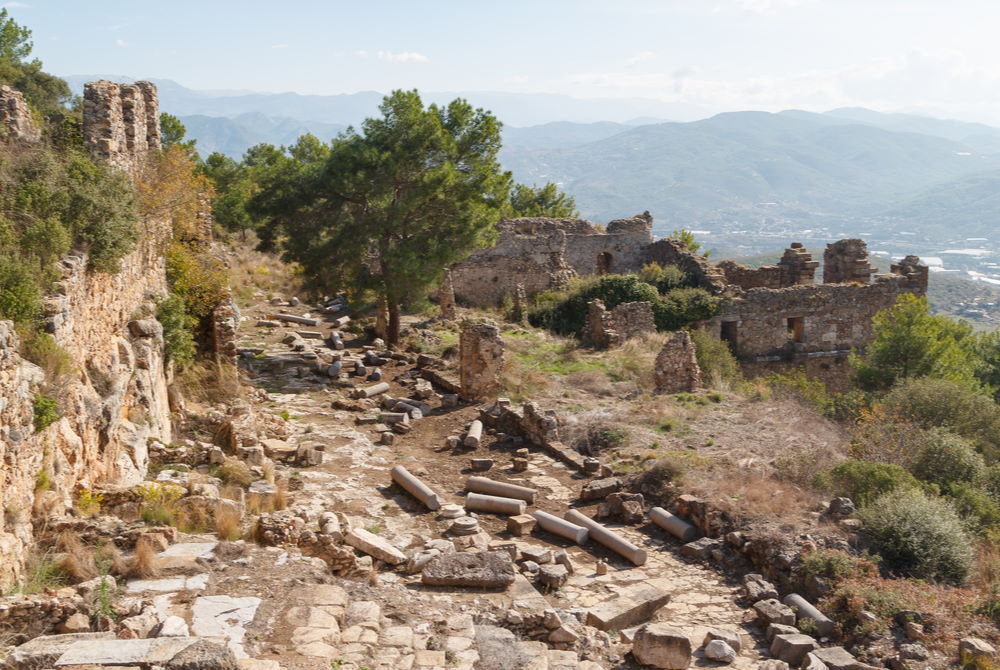 How to Get to Syedra

The ancient city of Syedra is located at the upper part of Seki Village, 22 km from Alanya.

Where is the ancient city of Syedra?

The ancient city of Syedra is located in the upper part of Seki Village, 22 km from Alanya.

How much is a ticket for Syedra?

There is no entrance fee to visit the ancient city of Syedra.

What can I see in the ancient city of Syedra?

Syedra was a typical Roman settlement with many ruins that have survived util today. Among them, there are quite large rows of plastered cisterns fed by a natural water source, a baptismal cave, a magnificent bath with mosaic flooring remains, a gymnasium, a colonnaded street and shops, a temple, a theater, churches, administrative buildings, an acropolis, and necropolis.

How can I get to Syedra?

The ancient city of Syedra is located in the upper part of Seki Village, 22 km from Alanya.

By car: On the way to Gazipaşa from Alanya, after you pass Kargıcak, go towards Seki Village on the left. It is possible to drive up to parking area for the ancient city of Syedra.

By bus: From Alanya, take the Alanya-Gazipaşa bus and get off in Seki village. 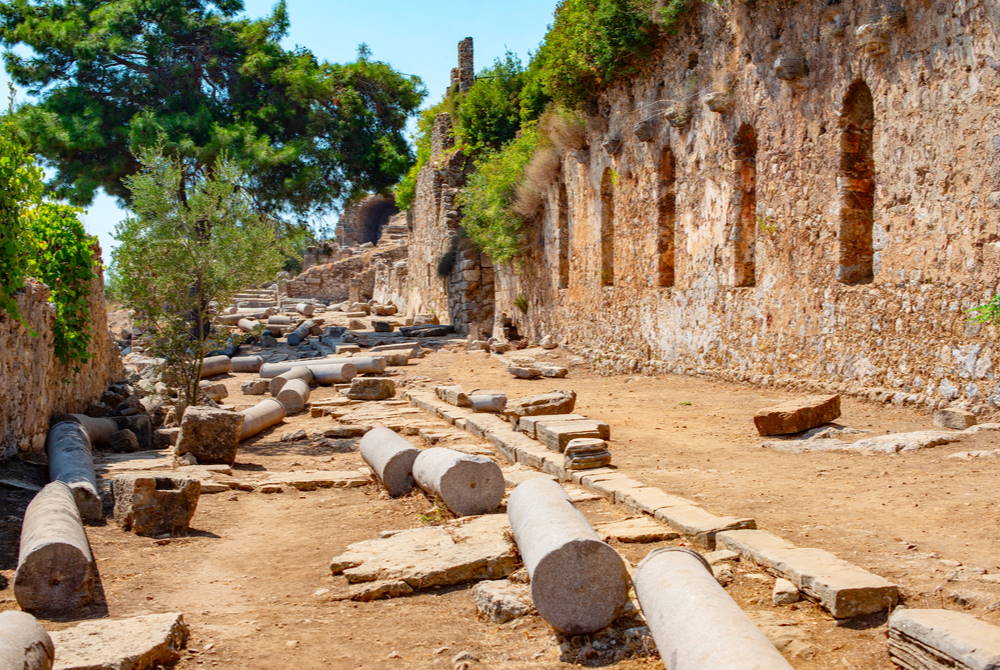 Syedra is located on the Alanya-Mersin highway, 23 km east of Alanya. The oldest known date of the ruins goes back to the 7th century BC and the city was inhabited until 13th century AD.

In the middle of the 1st century BC, it was first mentioned in literature as part of Cilicia. Syedra might have also belonged to the province of Pamphylia or Isauria. The city reached its peak in the 2nd and 3rd century, when it had more than 4,000 inhabitants.

Excavation campaigns began in 1994 under the direction of the Alanya Museum. The main street in the upper part of the city was then revealed. Many structures have been found including a temple, a theater, shops, baths, the city walls and several cisterns that supplied the population with water. In 2011, archaeologists who conducted underwater research were able to date quite a few relics from a port in Syedra to the Bronze Age, or about 5,000 years before our time.