Guide to the Ancient City of Xanthos in Antalya: History & Tips 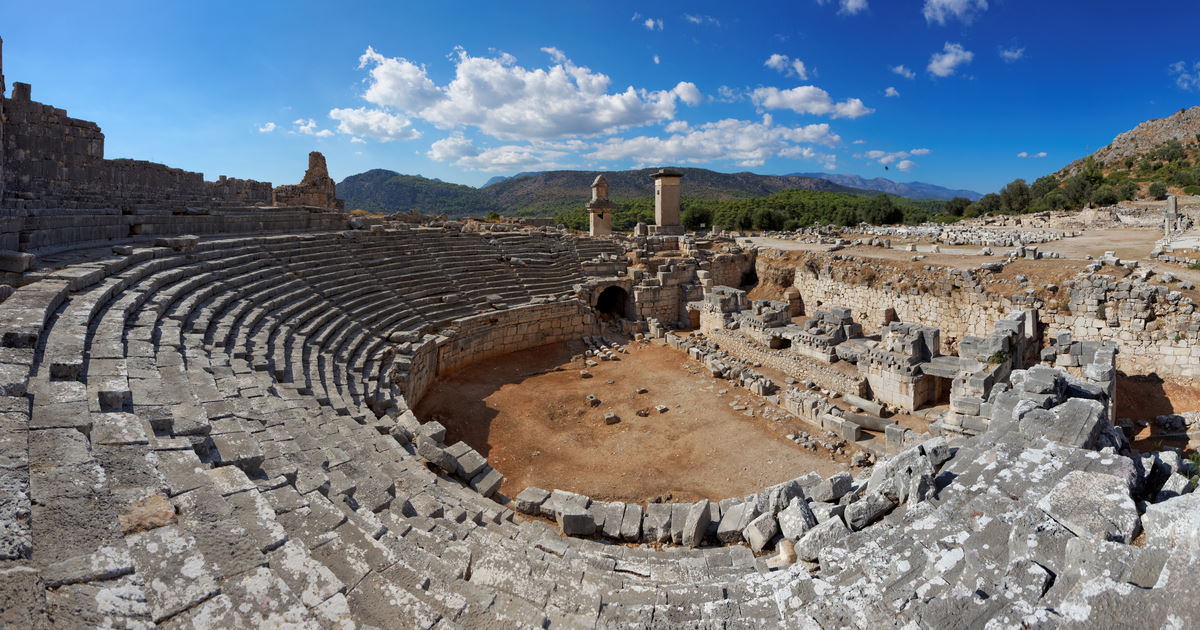 Xanthos is an ancient city located in the village of Kınık in Kaş, 3 hours away from Antalya city center by car.

It was once the capital of the Lycian Kingdom in ancient times. Very popular among visitors, this ancient city is not to be missed when visiting the ancient Lycian region on the south-west coast of Turkey.

In this article, you will find all the important and historical information you need to know before visiting the ancient city of Xanthos in Turkey.

1.
What Can I Do in Xanthos?
2.
Entrance, Tickets, and Tours
3.
How to Get to Xanthos
4.
Hotels Around Xanthos
5.
Frequently Asked Questions
6.
The History of Xanthos
7.
Contact 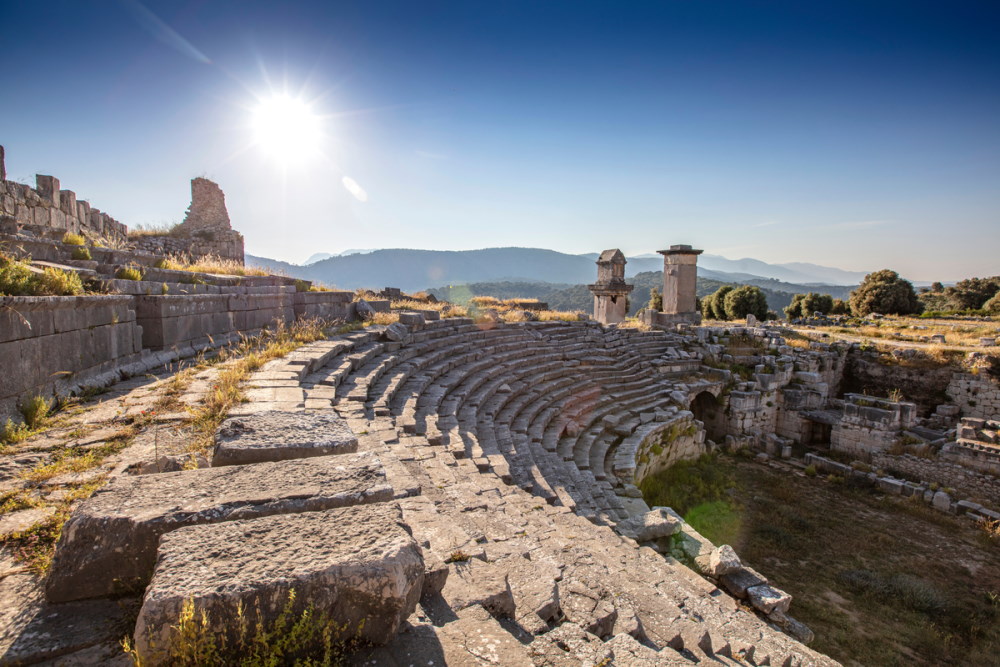 What Can I Do in Xanthos?

The ancient city of Xanthos is divided into two parts by a small ravine, which the Antalya road follows. Shortly after entering the site, you will see the Hellenistic city walls that were restored by the Romans.

Here are some details to pay attention to while visiting the ancient city of Xanthos in Antalya.

The pillar is situated near the agora dedicated to twelve Lycian gods. It has four faces with a long inscription engraved in three languages as Lycian, Milyan, and Ancient Greek. The inscription includes 12 lines of Greek which makes it possible to attribute this funerary monument to local king, Kherei, who gained a remarkable victory against Athinaians. The stele is an extremely important archaeological find pertaining these old languages.

The Agora was surrounded by porticos of smooth columns. There is also a Byzantine basilica with three rooms adorned with mosaic flooring. The basilica was destroyed during Arabian attacks in the 7th century.

Outside the agora, there are two more funerary monuments. One of them is the Pillar of Harpies which is about 7.5 meters high. Its original reliefs were taken by Charles Fellows, and they can be seen in the British Museum today. These reliefs were replaced with beautiful casts. These reliefs were possibly made by Milesian sculptors in the 5th century BC. They depict scenes of offerings in which Harpies, the conductors of souls, is featured. Another interpretation is that they represent scenes of judgement in the afterlife or scenes of supplication to Lycian rulers.

The theater beside the funerary monuments dates back to the Roman period, probably around the 2nd century AD. It lies against the Lycian acropolis. The theater had a vaulted corridor that lead into the orchestra. Only the lower parts of the cave remain today. It is possible to partially see the stage building decorated with columns.

The Lycian Acropolis is surrounded by a steep rock wall that rises  from the edge of Eşen Stream. You can see the Lycian Palace ruins on the hill overlooking the plain. Just opposite, lies the Roman acropolis where the Byzantine basilica, rock tombs, and Pillar Monument can be seen.

The sarcophagi and rock-tombs are scattered all over, each with different reliefs and lids. 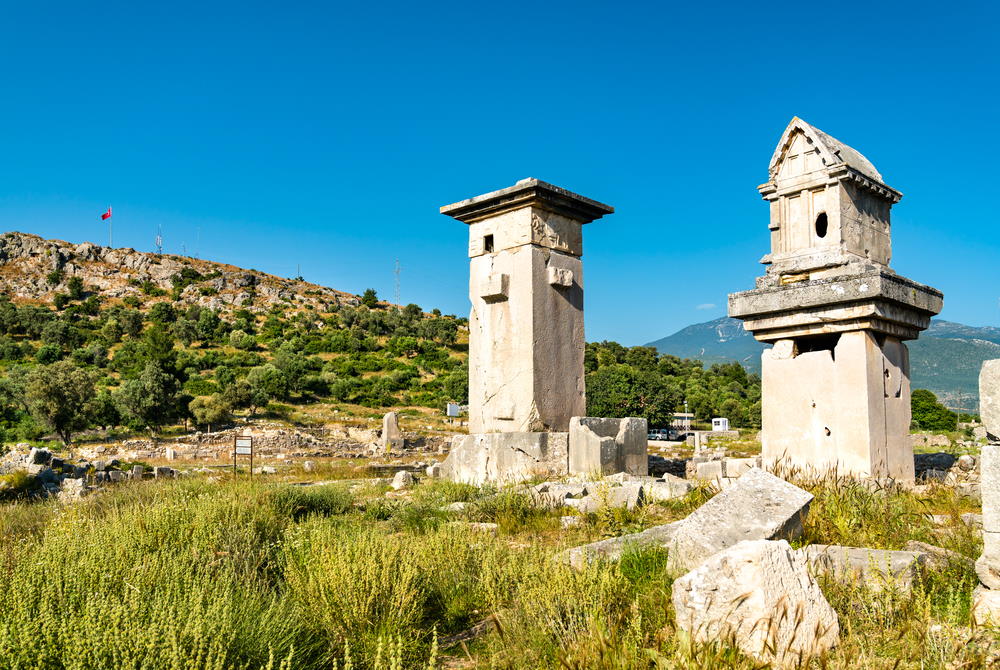 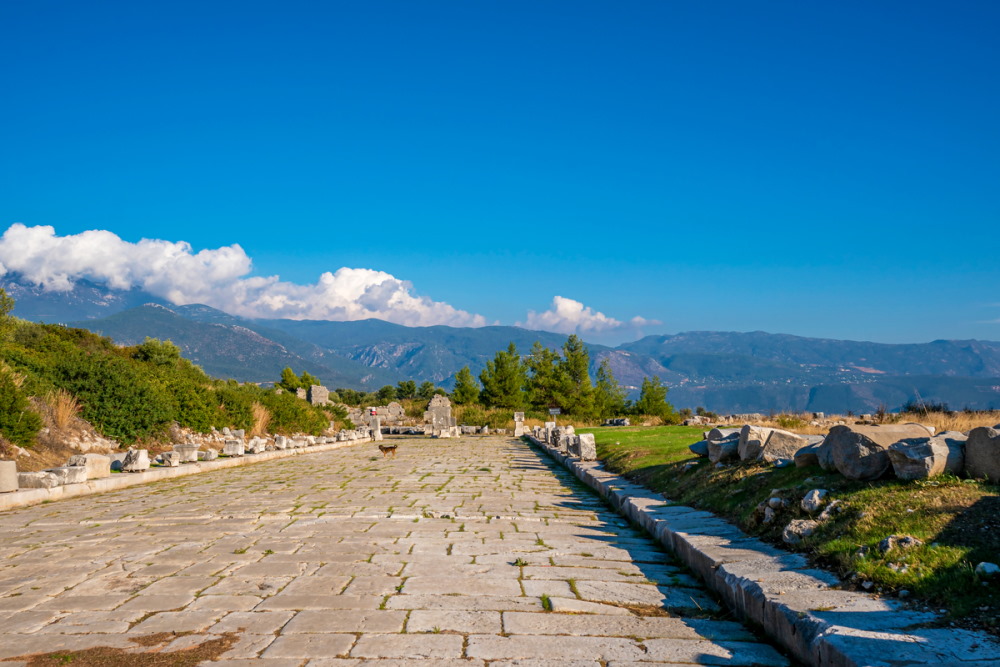 How to Get to Xanthos from Antalya, Fethiye, and Kaş

Xanthos is located near the village of Kınık on a hillside in a beautiful natural site overlooking the Eşen river.

Here are 4 hotels you can book around the ancient city of Xanthos. The area is very quiet and in the middle of nature. You will not find a lot of very luxurious resorts, but modest and comfortable establishments. You can stay in Kaş, Kalkan, or Patara : 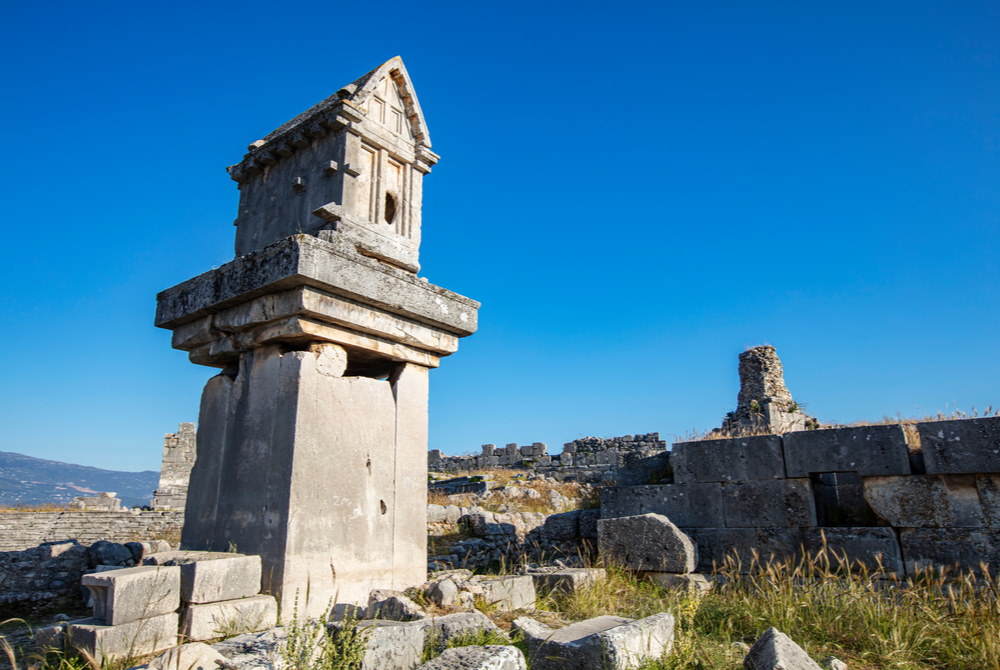 When was the ancient city of Xanthos included on the UNESCO World Cultural Heritage List?

Xanthos was included on the UNESCO World Cultural Heritage List in 1988 due to the originality of the Lycian civilization and the importance of the findings obtained during excavations.

How much is the entrance to Xanthos?

The entrance fee is 14 TL for Xanthos and if you have a Museum Pass, you can visit this historical ancient city free of charge. Please check for the current rates and visiting hours from the website before you get there. https://muze.gov.tr/muze-

Where is the ancient city of Xanthos?

Xanthos is an ancient city located in the village of Kınık in Kaş.

How can I get to the ancient city of Xanthos?

From Kaş and Kalkan take one of the Kınık minibuses .

From Fethiye, take one of the Kalkan / Kaş buses and get off at Kınık. Then, you can reach the ancient city by walking about 800-1000 meters. 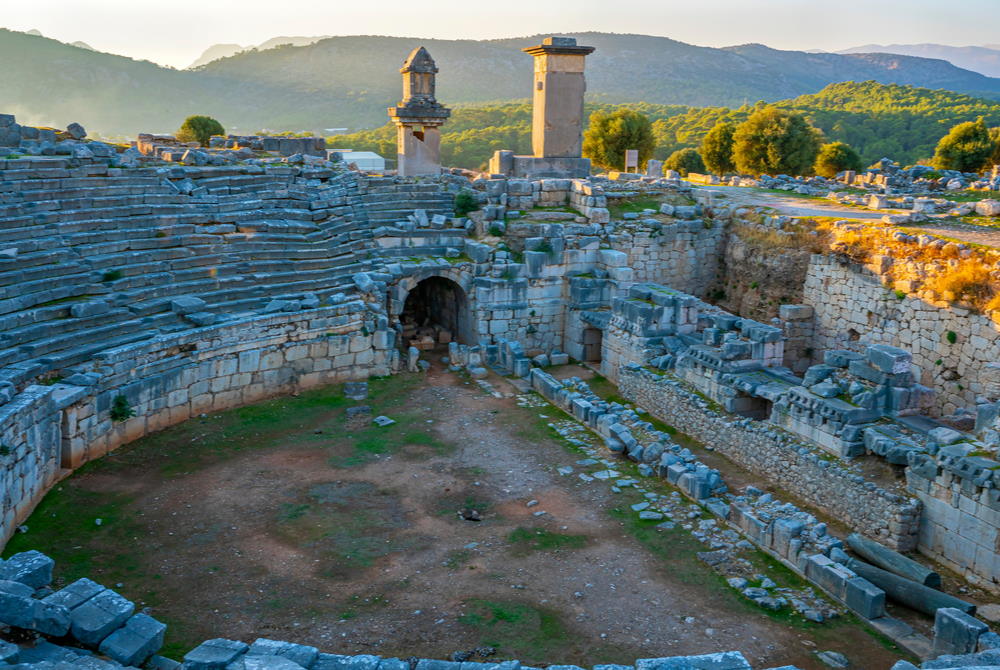 The History of Xanthos

Xanthos was the capital of the Lycian League in the 2nd century BC. It was destroyed by Brutus in 42 BC. Then, it was rebuilt by Emperor Marcus Antonius. In the 1st century, the construction of Xanthos under Roman rule was made until the time of Emperor Vespasianus. Most of the surviving Roman buildings were built during the Vespasian period.

The first research about Xanthos was done by Charles Fellows, who discovered Xanthos, in 1838. Charles Fellows dismantled the reliefs and other large architectural fragments and transported them to London with a warship that docked in Patara. Among them, are the Nereid Monument, Harpys Monument, and the Lion Tomb. Today, many artifacts taken from here are exhibited in the Lycia Hall of the British Museum. Charles Fellows introduced the Lycian civilization to the world by taking these remains, which aroused great interest in this civilization.

Excavations were resumed by French archaeologists in 1950, and have been carried out by Prof. Dr. Burhan Varkıvanç.

The Xanthos archaeological site is included on the UNESCO World Cultural Heritage List due to the originality of the Lycian civilization and the importance of the findings obtained during excavations.