Guide to Kastellorizo Island in Kaş: Ηistory and Tips 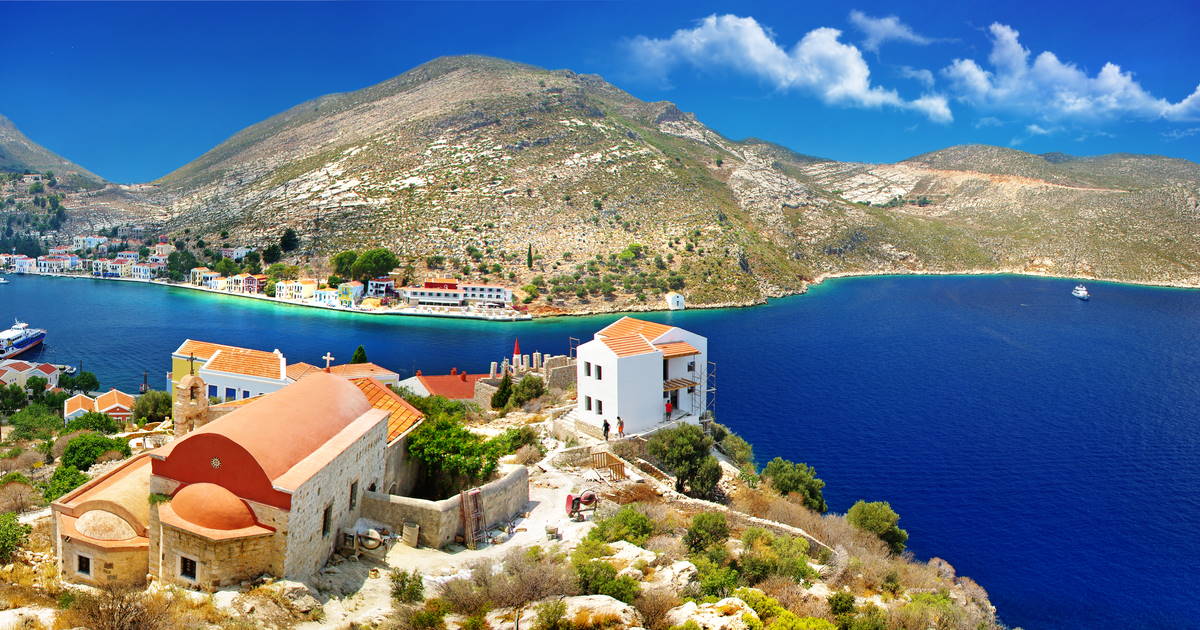 Kastellorizo is a Greek island and municipality in the Dodecanese of the Eastern Mediterranean. It's the closest Greek island to Turkey, only 2.1 km from Kaş, Antalya.

You can take ferries that depart daily from Kaş and enjoy the beautiful Greek island and everything it has to offer, including beaches, good food, and wonderful, welcoming, amazing landscapes.

In this article, you will find all the useful information you need to know before visiting this beautiful island during your trip to the Antalya region, including history, access, tours, and more...

1.
What Can I Do on Kastellorizo Island?
2.
Entrance, Tickets, and Tours
3.
How to Get to Kastellorizo
4.
Frequently Asked Questions
5.
The History of Kastellorizo
6.
Map

What Can I Do on Kastellorizo Island?

The official name of the island is Megisti. The island features three capes: Agios Stefanos (north), Nifti (east), and Pounenti (south west); between the first two there is a wide and accommodating bay, the island's main harbor, where you will find the only town on the island.

It's possible to get the island with a 20-minute ferry ride from Kaş. Exploring the whole island is quite easy, you can simply see everything in a few hours and enjoy the lovely atmosphere of Kastellorizo.

Strolling Along the Coastline: The best place to start is a walk along the coastline with colorful buildings. An old Ottoman mosque dating back to 18th century was restored and serves as a museum today.

Restaurants along the coastline have all of the Greek delicacies. This is the place to find classical Greek flavors from seafood to frappe.

Explore the Side Streets and Climb up the Hill: For the most beautiful view, go up the hill from the side streets to catch various angles. If you go parallel to the shore, you will reach the view of the island from the height as you go up.

The calm, cobbled streets are a real catch for photography lovers. You'll meet more interesting and picturesque traditional houses as you dare to enter the side streets. The best thing is you don't need to be afraid of getting lost on this small island! 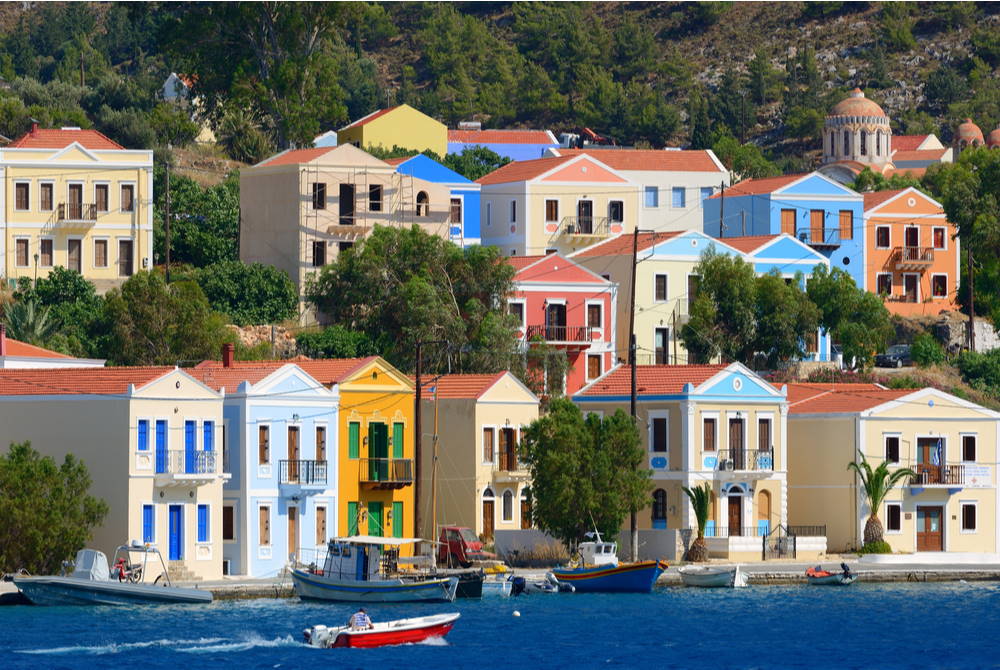 The Castle of the Knights of St. John: This castle was built in the 14th century and today only the ruins of the building survive. They are located on Castello Rosso, the red rock from which the name of the island comes.

Basilica of St. George: Saint George of the Horafia is built with the Byzantine cross style, like many other churches in the Dodecanese.

Boat Trip to Blue Cave: You can make a deal with one of the boats on the coast to take you to the Blue Cave that lies on the southeast coast of the island. The cave can only be reached by boat and since the entrance is barely one meter above sea level, only under calm sea conditions. The best time of the day to visit is early in the morning, when the sun is still low.

Swimming Break: You can swim in Aya Yorgi Bay, a clear place that is also close.

Museum of Puzzles: Kastellorizo has the first puzzle museum in Greece and one of the few in the world. The purpose of this interactive museum is to inspire young and old through strange mechanisms and ways of solving puzzles. 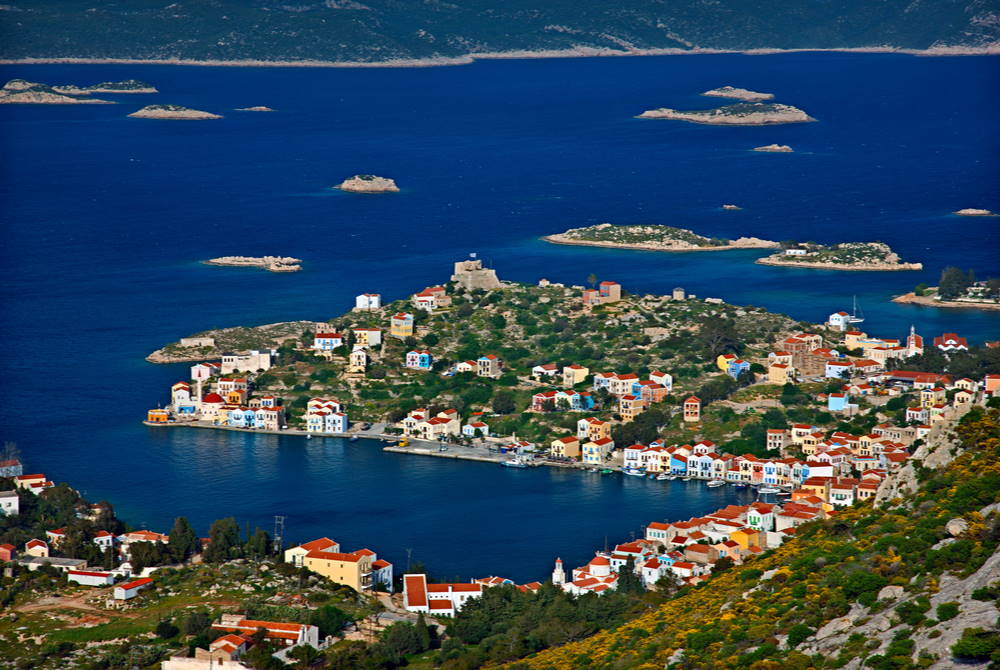 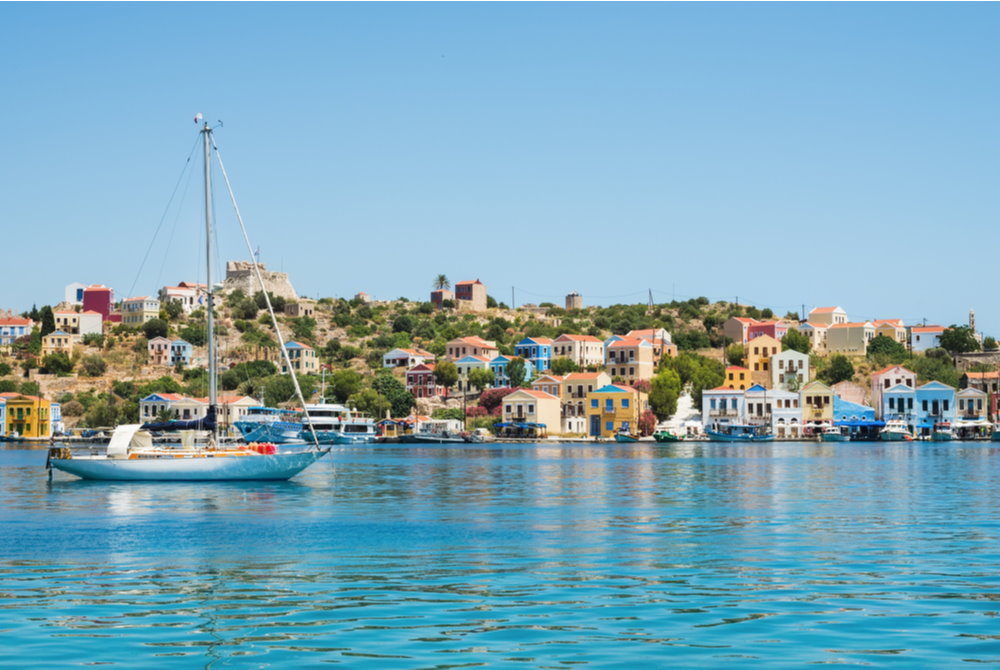 How to Get to Kastellorizo

There is no public transportation on the island. It's quite easy to get everywhere on foot. 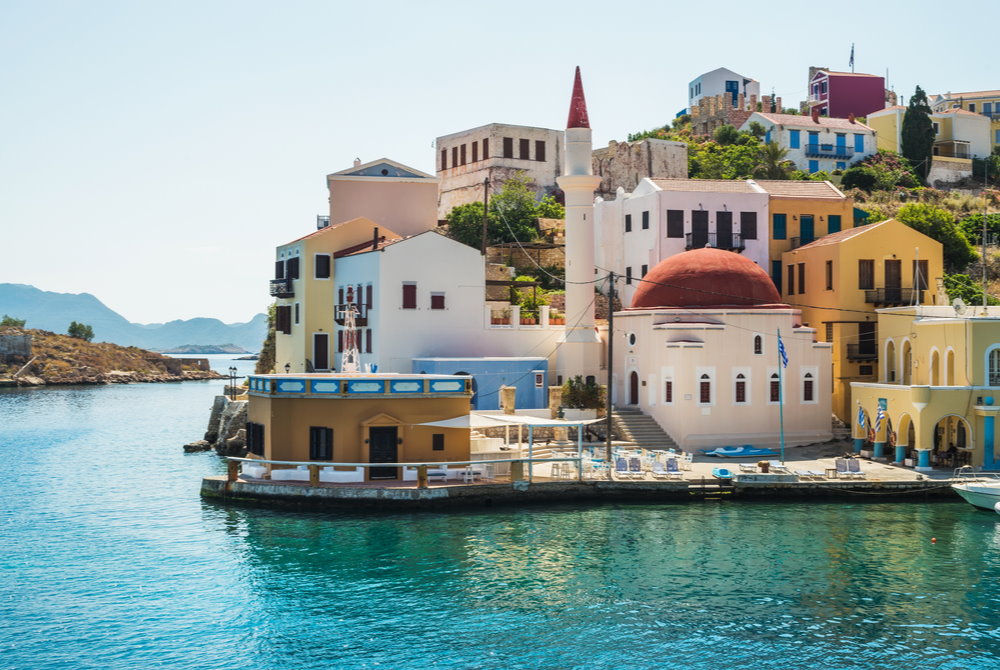 Kastelorizo is a Greek island and municipality of the Dodecanese in the Eastern Mediterranean.

How can I get to Kastellorizo?

The easiest way to get to Kastellorizo is to take the daily ferry departing from Kaş.

What can I see on Kastellorizo Island?

The best place to start is a walk along the coastline with colorful buildings. An old Ottoman mosque dating back to 18th century was restored and serves as a museum today.

Restaurants along the coastline have all of the Greek delicacies. This is the place to find classical Greek flavors from seafood to frappe.

For the most beautiful view, go up the hill from the side streets to catch various angles. If you go parallel to the shore, you will reach the view of the island from the height as you go up.

Many other activities are available on the island.

When is the best time to visit Kastellorizo?

Because of its Mediterranean climate, the most enjoyable time to visit the island of Kastellorizo is during the spring and summer. 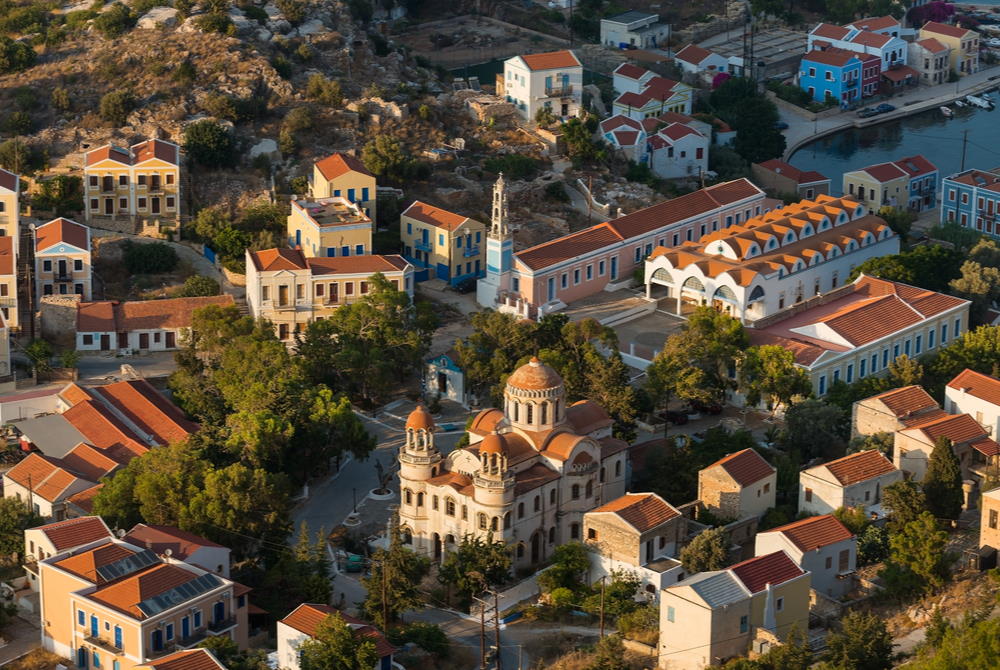 The History of Kastellorizo

Although a small island, Kastellorizo or Megisti has a long history, having been inhabited since the Neolithic era, and then colonized by the Dorians, like all the Dodecanese.

It received the name Kastellorizo around the end of the 14th century, from the Knights of St. John, on the 8th Master of the Order, when they built a castle under which the city developed on the reddish rock near the entrance of the port.

The first inhabitants of Megisti, who took part in the campaign of Troy along with the other Dodecanese were the Dorians who had lived in Rhodes and with which they had political and administrative ties. The island was ruled by virtuous Rhodian commanders.

After the death  of Alexander the Great, all the Aegean islands came under the jurisdiction of Ptolemy I and then were occupied by the Romans. Megisti gained partial autonomy, which was abolished in 38 BC. by Emperor Vespasian and after the division of the Roman state. Then, it was ruled by the Byzantine Empire.

During Byzantine times, the island was included in the "Theme of the Cypriots", as well as Rhodes. In 1306 it was occupied by the Knights of St. John of Rhodes.

The island was consequently conquered by the Egyptians, the Franks, and the Turks from 1440 to 1522.

Kastellorizo was assigned to Greece with the Paris Peace Treaties, in 1947. In May 1945, it was still under British administration, but on September 15, 1947 effectively came under Greek administration.

Have a look at other islands in the Antalya region:

8 Amazing Islands in Antalya You Should See

8 Amazing Islands in Antalya You Should See